A Not-So-Arbitrary Arbitrary Collection - the 1960s 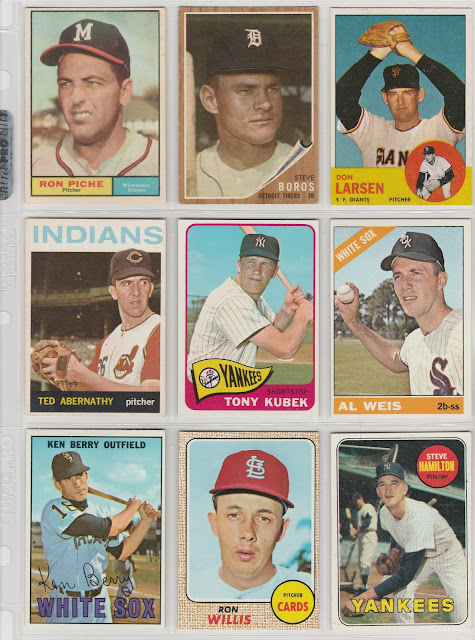 Not much suspense involved with this series, which started last Sunday. This weekend we are looking at 9 cards from the 1960s. Where is 1960, you say? Well, I will have a separate page for all the "0" year cards at the end of this project. 9 pocket pages just work better this way. 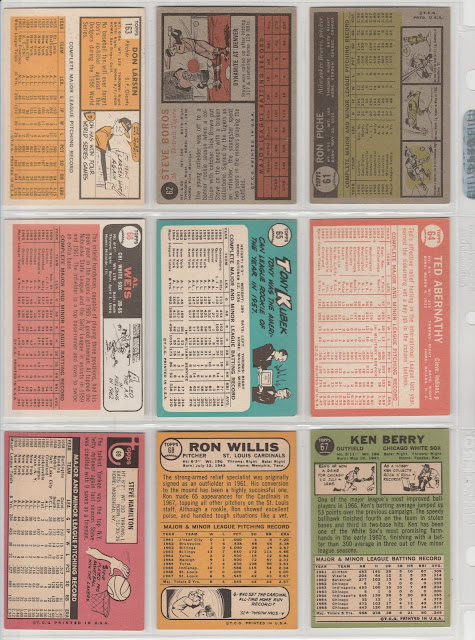 You can see here that I took some liberties with the '63 entry - I didn't want to use a team card on this page (card #63 is the Reds team card) so I picked card #163 to represent the year to have a base card.
1961 and 1962's backs are "upside down" compared to the rest of the horizontal cards, I hadn't noticed that before now. Tony Kubek was the 1957 Rookie of the Year, and Al Weis was a Topps All-Star Rookie in 1963. Don Larsen is probably the biggest name on the page, thanks to his perfect game in the World Series. The Ted Abernathy card probably has the most creative cropping, but I think my favorite on the page is Steve Hamilton from 1969 - I like the casual feel of the background with his Yankee teammates gathering around the batting cage. Ken Berry likes to collect Rock n Roll records - he's just like you and me!