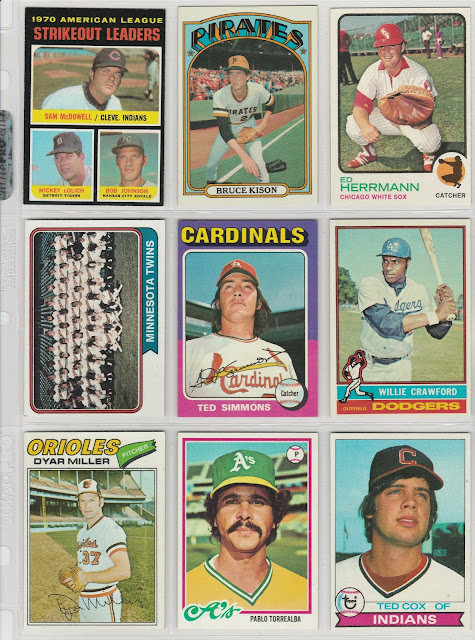 Here now is the 3rd installment of the series, which started 2 weeks ago with the 1950s, and continued last Sunday with the 1960s. The premise is to use card #71 from 1971 Topps, #72 for 1972 Topps, etc etc. I've already broken the arbitrary rule last week since I didn't like the look of a team card on the page, but now I've broken that highly subjective rule by following my original completely arbitrary one. This page has a team card (hey, I had doubles) and also a League Leader card. You still get the idea of the card design on those two cards. 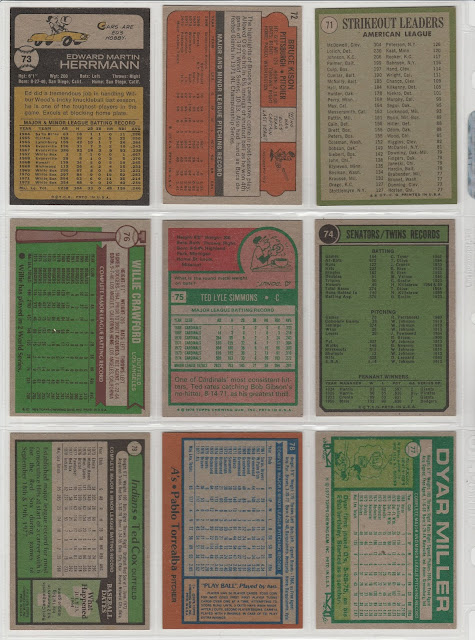 Here are the card backs and here are some fun facts gleaned from them: Sam McDowell outpaced all other AL hurlers with 304 ks in 1970, Bill Mazeroski was the Pirates' team captain in 1971, Ed Herrmann like cars, Harmon Killebrew had the most RBI (140) in a Twins season (still a team record). Ted Simmons caught a Bob Gibson no-no, Willie Crawford was in a pair of World's Series by 1976, Dyar Miller started out as a catcher, and Ted Cox had a base hit in each of his first 6 MLB games, which set an All-Time record.

Ted Simmons is on the "modern era" h.o.f. ballot this year for the veteran's committee. I think he has a pretty good case (frankly, everyone on the ballot has a good case), given that catchers are seriously underrepresented in the Hall.
Posted by Brian at 5:22 PM