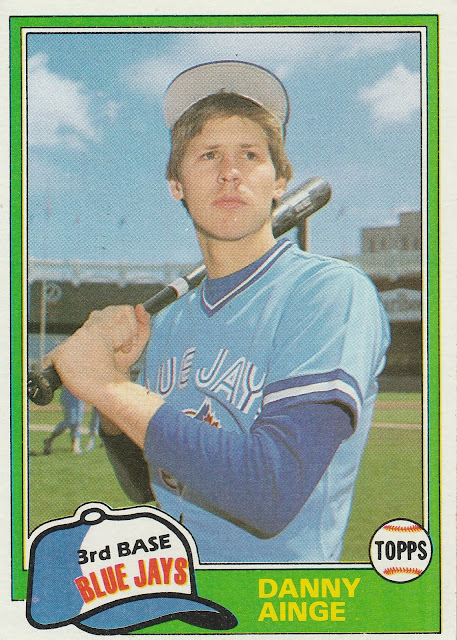 In 2018, I finished a collection of all the "Cardboard Box" Topps Traded sets from 1981 - 1991. I thought it would be a fun topic for the blog to dig into the sets and share some highlights from each one. Danny Ainge, of course, was a big rookie card in this set. Not so much for his baseball career, but because this was his first of two professional sports careers. 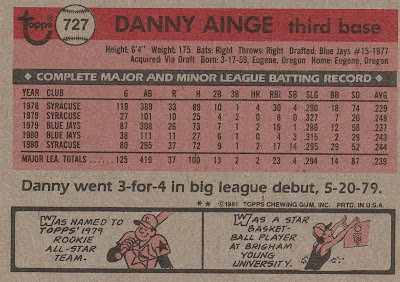 The back of his card alludes to his versatility. After a few seasons in Toronto, Ainge switched sports and became a household name in Boston. At 6'4" he was considered quite tall as a baseball player. On the basketball court, he was just the right size to be "pesky" in the paint and source of consternation for small forwards throughout the NBA. 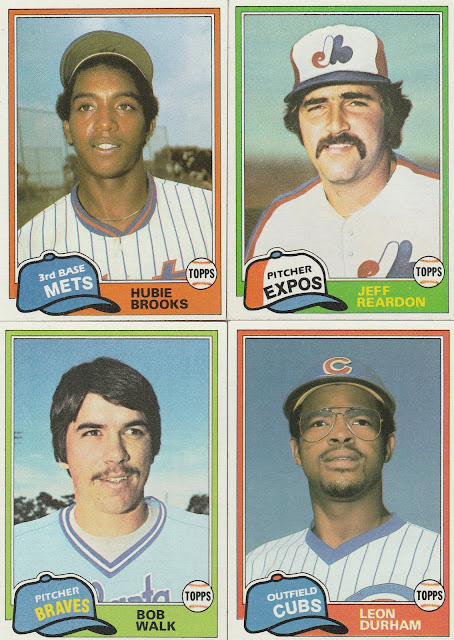 It was a decent rookie crop in the 1981 Traded set. The Legend Bob Walk had just moved to Atlanta after starting game 1 of the 1980 World Series for the Phillies. Leon "Bull" Durham was just getting his career started, not knowing he'd one day be on the big screen as a Minnesota Twin in Little Big League. 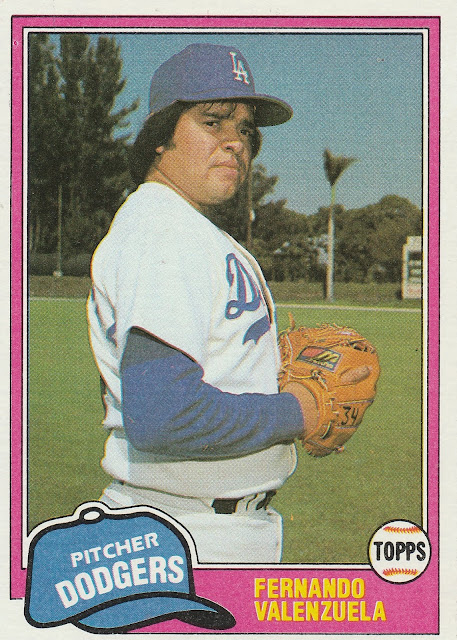 The big rookie of 1981 was Fernando Valenzuela. He, like many of these guys, had cards in the main 1981 Topps set. That card, however, was shared with two other Dodger Rookies. "Fernandomania" swept the NL and demanded a bigger stage for the young lefty. Topps was happy to oblige. 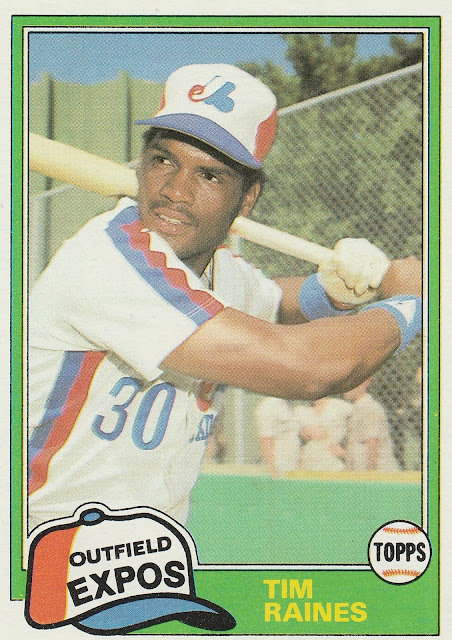 The only rookie in the set that was also a Hall of Famer was the electric Tim Raines. The Expos were well on their way in 1981 to becoming one of the most exciting teams in recent memory thanks to Raines and their young nucleus of talent. 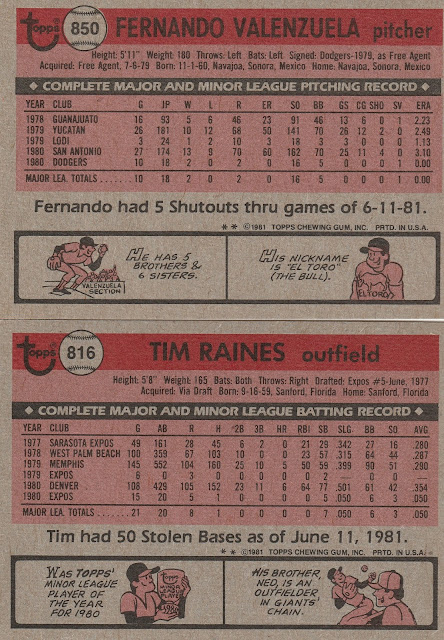 The Traded set had one big advantage - which was the ability to identify the players making the biggest impacts in the current year. Both Valenzuela and Raines had gaudy numbers by mid season when Topps finalized the checklist for the traded set. 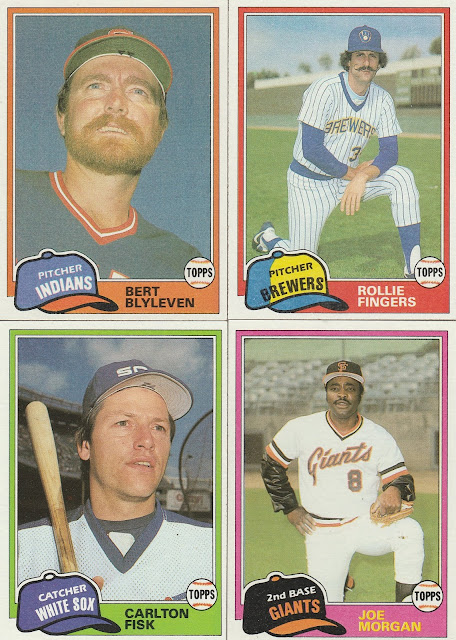 Speaking of Hall of Famers, the 1981 Topps set had 9 in all. Blyleven was relieved to escape the National League, where he would often be pulled from close games before he was ready. Rollie Fingers solidified the bullpen in Milwaukee and helped the team make it to the 1982 World Series. Fisk would become a legend in his new Sox, and Joe Morgan would continue his excellent play well into his late 30s. 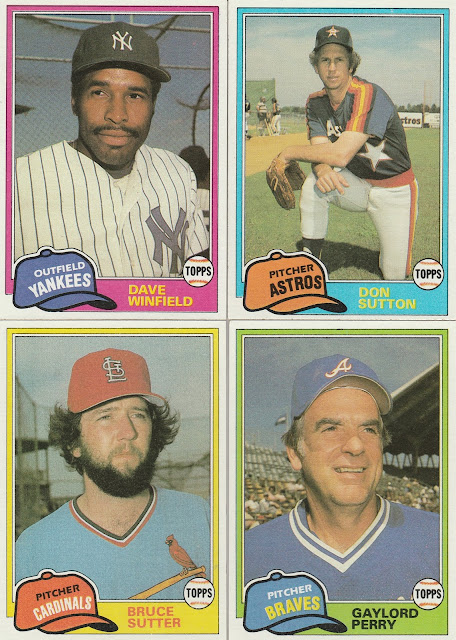 Dave Winfield made headlines joining Reggie Jackson in New York, but would have a tumultuous relationship with the Yankees' owner George Steinbrenner. Don Sutton spent just a year and half in Houston, before heading to the Brewers to join Rollie and Harvey's Wallbangers. Bruce Sutter was right in the prime of his career, and flew south to join the Redbirds. 1981 was his 5th All-Star Appearance, and he led the NL in Saves for the 3rd of 4 straight seasons. The Cardinals were the Brewers' opponents in the '82 Series, and Sutter prevailed over Sutton and Fingers. Gaylord Perry is wearing an extremely clean hat for a man who threw a variety of shall we say "heavy" breaking pitches. Perry was the NL leader in hits allowed, but he also had the lowest walk rate (BB/9). 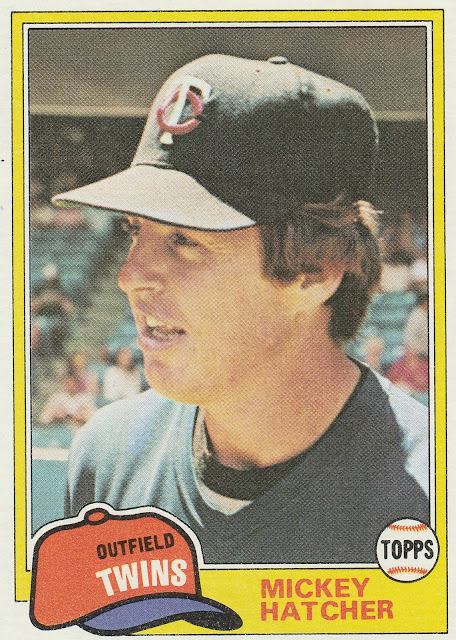 The only Twin in the 1981 Traded set is the jovial erstwhile Dodger, Mickey Hatcher. Mickey came to the Twins in the Ken Landreaux trade in Spring Training of 1981. Hatcher would spend 6 seasons in Minnesota, returning to the Dodgers in time to win the 1988 World Series. In the series, Hatcher hit .368 with a pair of homers. 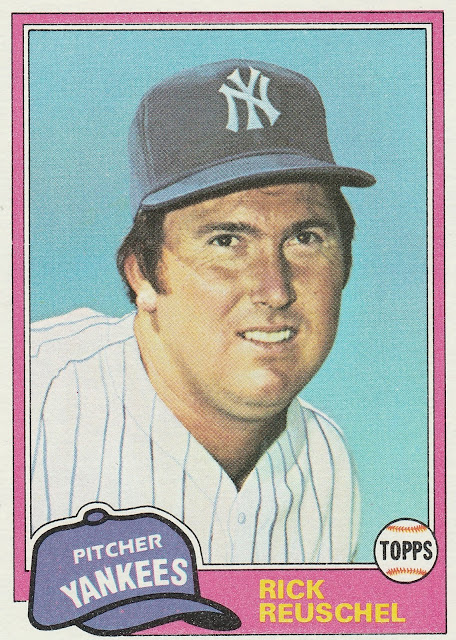 Traded sets sometimes get the new team before they get a photo in their new uni. That means bad airbrushing! Rick Reuschel's card was among the worst offenders in the 1981 Traded Set, and Rick can barely hide his disgust. 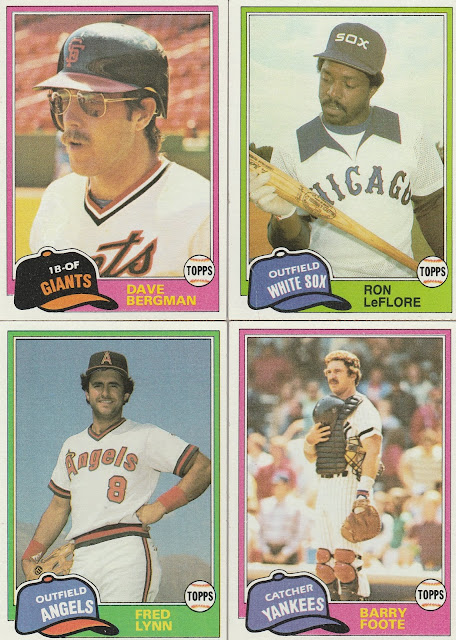 Then again, there will also be some hidden gems in Traded Sets, and these were my favorites from this set.

As promised -- From Ainge, to Zisk!