First in War, First in Peace-- Last in the American League 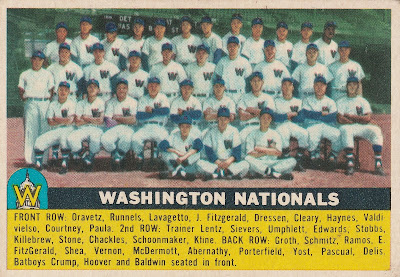 One of the fun things about a completed set is deciding how you want to organize it. I have the 1956 Topps set in a binder, sorted by team, in the same order that the teams finished in the 1955 Standings. The 1955 Washington Nationals (also known as the Senators) finished comfortably in last place, 43 games behind the AL Pennant-winning New York Yankees.

By the start of the 1956 season, the Washington Franchise had gone 23 seasons without a pennant. The long time owner / president  of the team, former MLB player Clark Griffith had just passed away. His son Calvin inherited the reins and was already looking to relocate the team, ultimately doing so for the 1961 season. 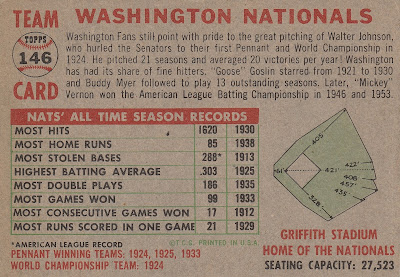 The 1956 Topps Set had fantastic team cards. The team photo on the front, and the back includes some relevant stats and a cool aerial view of the team's home ballpark.

1955 was also the Broadway debut of the musical hit "Damn Yankees" in which a beleaguered Nats fan sells his soul to the devil to become the power hitter the Senators need to finally win the Pennant and beat the Yankees. 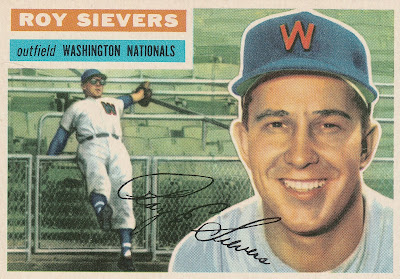 My Favorite Nats card in this set is the team's resident power hitter, Roy Sievers. He's casually draped across an outfield fence leaping for a fly ball. Sievers is also rocking a pair of sunglasses, which fits nicely into one of my mini-collections. 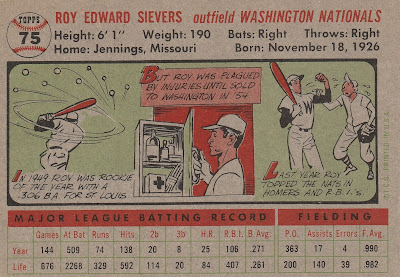 Sievers was the 1949 Rookie of the Year, but it wasn't until coming to Washington in the mid 50s that his career began to take off. He led the Nats in homers and runs batted in in 1955, and nearly repeated the feat in '56, trailing the team leader by 1 RBI. 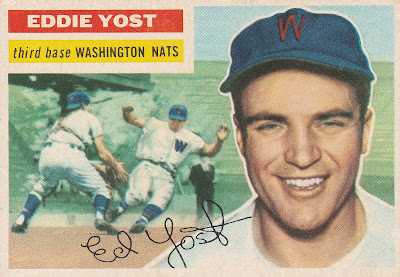 Sievers had the more conventional eye popping stats, but the team's best player was Eddie Yost. He wasn't a power hitter, but he was an elite offensive player. Yost led the American League in Walks 6 times, and ranks 11th All-Time in free passes. He even had the nickname "The Walking Man." Not very clever, but accurate! Yost was also a stout defender at the hot corner, regularly the league's best in putouts, assists, and double plays turned for third basemen. To give an idea of the kind of player Yost was, think of this guy: 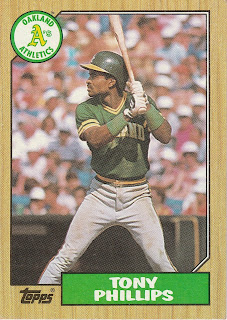 Yost drew more walks, Phillips had more positional flexibility, but the two sub 6 footers were on base machines for their respective teams for more than a decade. 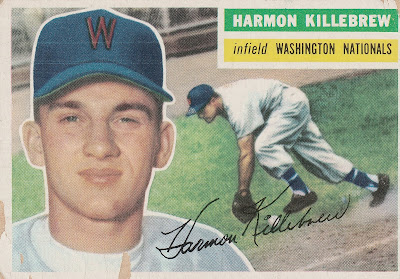 The only Hall of Famer in the team set was blocked by Yost for most of the 1950s - Slugger Harmon Killebrew. The timing of "Damn Yankees" is so funny because Killebrew was the big bat the team had been waiting for, but it turned into a Faustian bargain for the fans of Washington.  They had a very short window in which to cheer for the Killer before the team would pick up stakes and move to Minnesota. In exchange for getting a new expansion franchise in 1961, the city lost out on Killebrew, Oliva, Carew, etc. 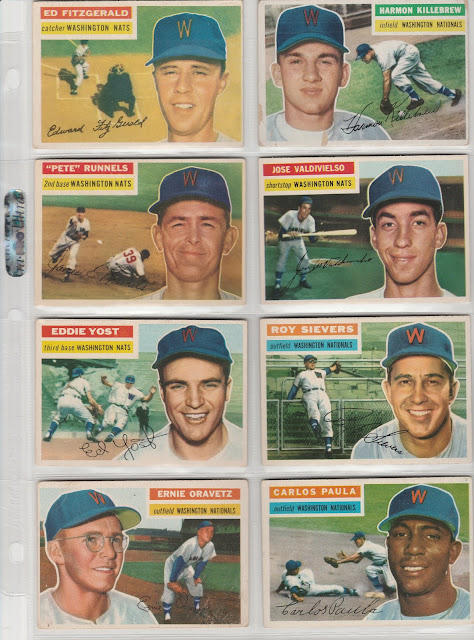 In the binder, I have the first page of each team set with the position players that had the biggest impact in 1955 and 1956 in order - Catcher, First Base, Second, Short, Third, Left Field, Center, Right. Harmon gets promoted to the first page because the team's primary 1B in 1955 was Mickey Vernon who is shown with the Boston Red Sox, and Pete Runnels had the duties in 1956, but he was the team's second baseman in 1955. Carlos Paula integrated the Washington roster in 1954. The Baseball Hall of Fame has a nice article on him, check it out. 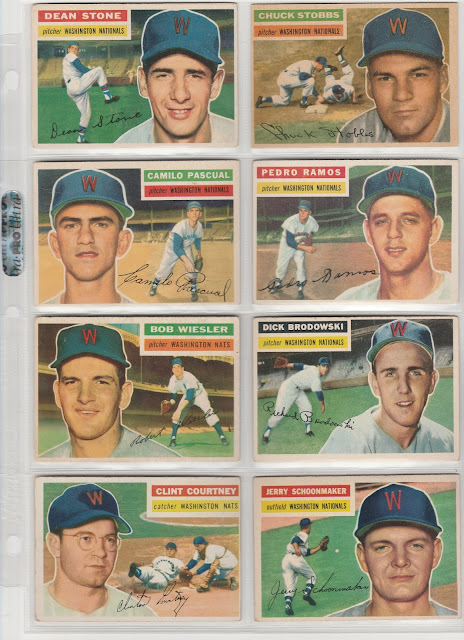 Page two is for the pitchers. The Washington franchise had a ton of player movement that left them with just 6 pitchers in the 1956 Topps set. The Senators had a pair of young pitchers from Cuba, Pedro Ramos and Camilo Pascual that were effective bullpen options for the Senators, and later became part of the Twins starting rotations in the early 1960s. Ramos, Pascual, Paula, and rookie short stop Jose Valdivielso were all signed out of Cuba by scout Joe Cambria, who ushered in an era of Cuban players coming to the U.S. to excel in the United States - here's another great article to read about Cambria and Cuban major leaguers. 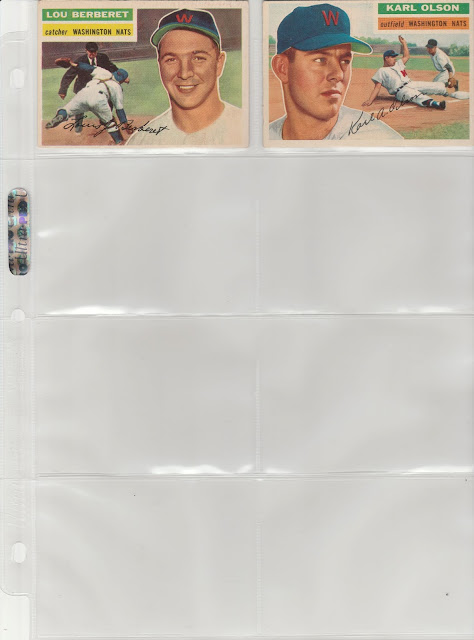 After the pitchers, the final page(s) feature bench players, rookies and players recently acquired in trade. The rookie cards in the team set are Valdivielso, Ernie Oravetz, Ramos, Bob Wiesler, Jerry Schoonmaker and Lou Berberet. The team's fortunes would slightly improve with those rookies and Rookie outfielder Jim Lemon, finishing one place higher (7th) in 1956.

I plan on covering the whole set, what do you think of this format? Would you like to see all the backs?
Posted by Brian at 6:34 PM