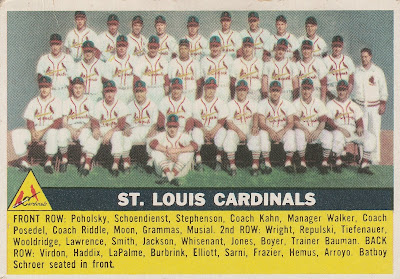 One of the fun things about a completed set is deciding how you want to organize it. I have the 1956 Topps set in a binder, sorted by team, in the same order that the teams finished in the 1955 Standings. In 1955, The St.Louis Cardinals finished 68 - 86, good for 7th place in the National League.


The Cardinals were purchased in 1952 from Fred Saigh by the Anheuser-Busch Company, keeping the Cardinals in St. Louis. The St. Louis Browns' owner Bill Veeck owned the stadium shared by both teams, the intimate (and dilapidated) Sportsman's Park. Facing financial pressures from keeping up the stadium and pressure from Major League Baseball to behave himself, Veeck was forced to sell the stadium to the Busch family to hopefully keep the Browns and to stay solvent. In the end, it was a good deal for the Cardinals, and a good deal for the stadium, which was renamed Busch Stadium and began to see the improvements and renovations started by a cash-strapped Veeck come to fruition. 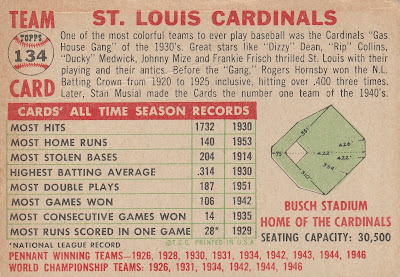 The Cardinals, of course had a rich history of success by this time, particularly in the 1930s and 40s. The 1950s had seen the team start to fall on hard times. Branch Rickey had built the farm system that was the envy of baseball, but the team now lagged behind other squads that had invested more fully in scouting the new pipelines of talent in the Negro Leagues and in Latin America. It was not until Gus Busch became owner and purportedly asked "Where are all the black players?" that the team became integrated. They had already missed out on local talent Ernie Banks, a mistake that would cost them for the balance of the decade. 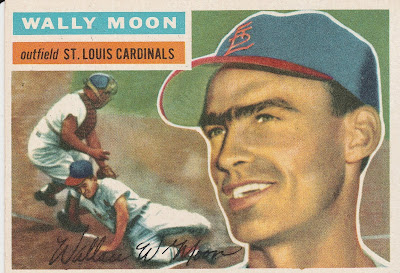 The 1954 Rookie if the Year in the NL was none other than Wally Moon! Moon followed up that season with a strong sophomore campaign. He hit 19 homers and drove 76 runs in 1955, compiling a WAR of 2.8. The Cardinals best hitter of course was Stan Musial. In 1956, Musial was under contract with Rawlings, and the cost of getting Rawlings to waive their exclusive rights combined with the cost of signing Musial to a separate card contract was too high a price for Topps to pay. 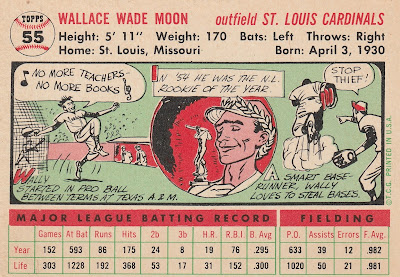 Wally would go on to have a solid 12 year career with 2 All-Star appearances and a pair of World Series victories with the Dodgers. 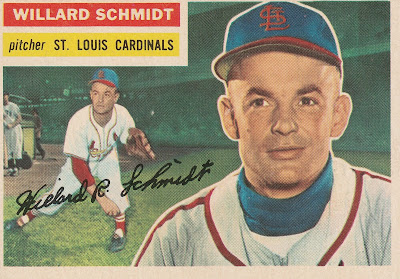 The Cardinals' best pitcher in 1955 was the team's fifth starter, Willard Schmidt. He only started 15 games, but led all St. Louis starters with a 2.77 ERA. He limited walks and hits allowed to a minimum, and won 7 games for the Redbirds. His ERA+ was 146, by far the best on the team. 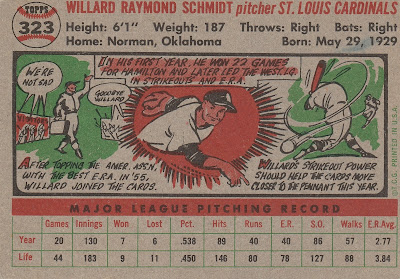 Schmidt did not ultimately blossom into the starter that the Cardinals had hoped he would be, but he did convert himself into a competent relief pitcher - - in Cincinnati. 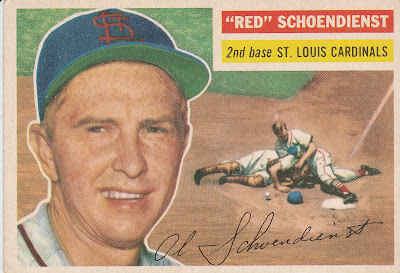 The lone Hall of Famer in the set is the great middle infielder, Al "Red" Schoendienst. Red was in his 32 year old season, and was named to his 8th straight All-Star game. He was a decent hitter, but a superb defender. He led the NL in fielding pct in 1955, as he did in 5 other seasons dating back to 1949. His hitting slumped a bit in 1955, and as a result of his age, the Cardinals felt he was a tradeable asset the following season. 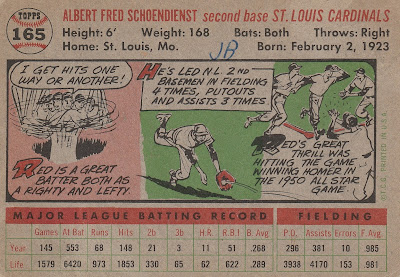 When Schoendienst was shipped to the Giants, he proved that there was still some gas in the old Gashouse Gang after all. He boosted his batting average back above .300, then found a spot on the Milwaukee Braves roster in time for the 1957 pennant race. He had a career high 200 hits in the regular season, and added 5 more in the World Series, which Milwaukee won over the Yankees. 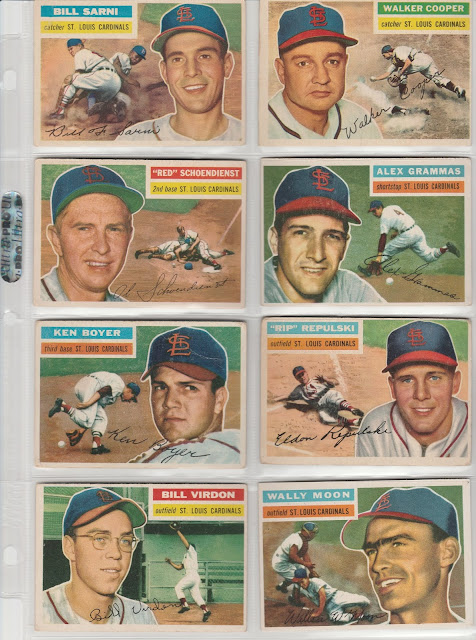 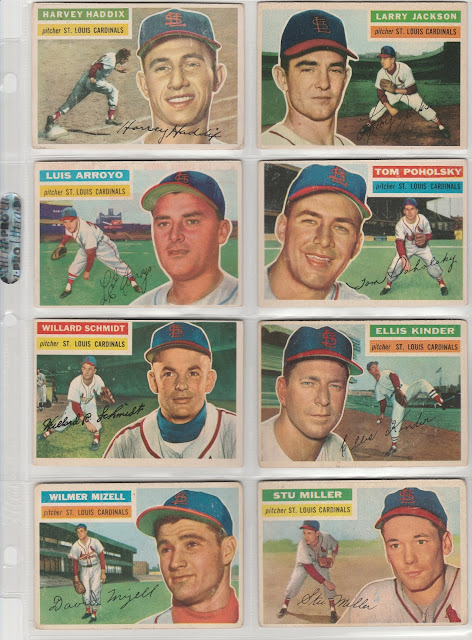 The 1956 Season preview for the Cardinals in Sports Illustrated places a lot of hope on the return of Wilmer "Vinegar Bend" Mizell from his stint in the military, and he did contribute the most innings of anyone on the staff and had a league average ERA. The veteran pitcher Ellis Kinder was just what the team needed, providing 25 innings of sparkling relief and a season of wisdom in the bullpen. 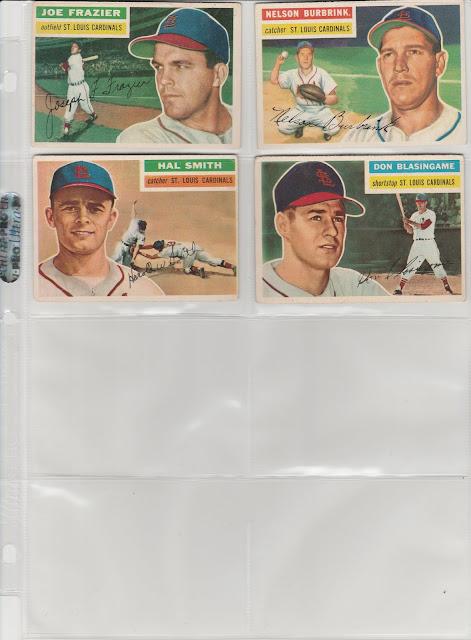 The team's fortunes would improve in 1956, with their record improving to 76-78, good for 4th place in the NL. Their new manager Fred Hutchinson brought a brand of baseball that emphasized a conservative approach on the basepaths, but patience at the plate to get on to allow Musial, Repulski, and Moon to drive the runners in.
Posted by Brian at 7:36 PM