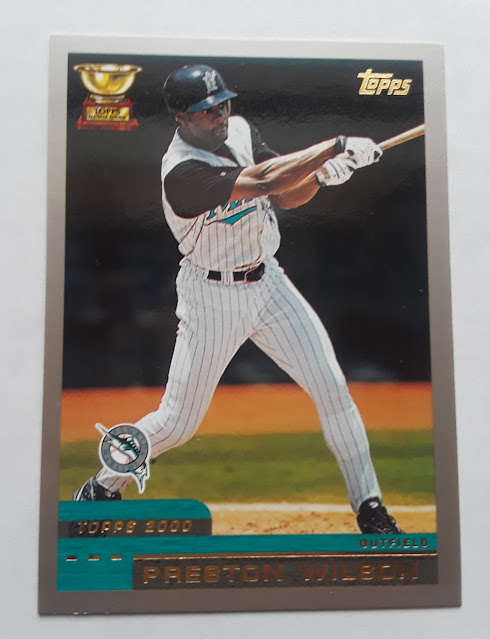 Preston Wilson arrived in the big leagues after a very long journey that took him from the first round of the 1992 MLB Draft, to 4 top-100 prospect listings, to a winter spent playing baseball in Australia. After a 5 year minor league sojourn, Wilson had arrived in Queens, only to be traded away after just 8 games for the Mets. Wilson was big time prospect coming to Florida in exchange for the Marlins' brand new catcher Mike Piazza. 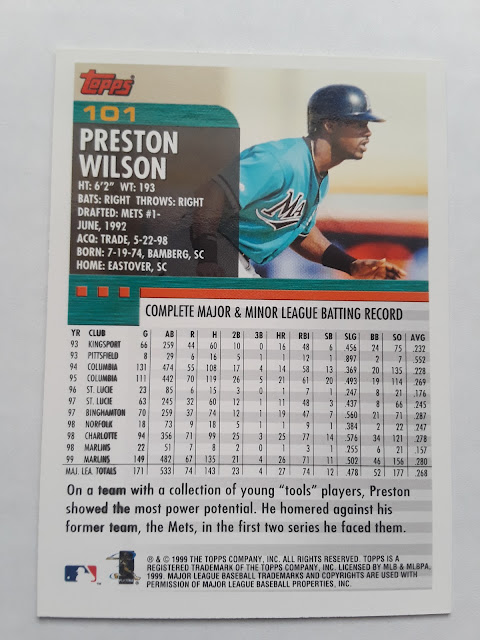 His first full season came in 1999, and he was able to show power and a little speed for an exciting and young rebuilding Marlins team. He'd finish 2nd in the NL Rookie of the Year voting and had a strong season, with a 119 OPS+ and hit 26 homers to go with 11 stolen bases. He was a great choice to join the 1999 Topps All-Star Rookie team. 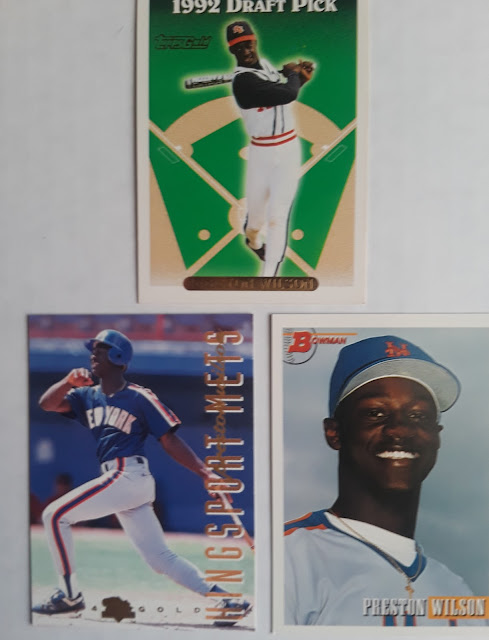 Wilson was the 9th Overall selection in the 1992 MLB draft, picked by his adopted father Mookie's former team, the New York Mets. To get the potentially awkward subject out of the way, Mookie Wilson's brother Richard was Preston's biological father, but it was Mookie that became Preston's mother Rosa's husband and raised Preston as his own son. So Mookie is technically Preston's uncle, but was also his father as far as Preston was concerned, and officially adopted him. Families are complicated, but it is clear that Preston was well loved and well raised by his parents. Preston was just 17 when he was drafted, and started his pro career with the Kingsport Mets in 1993. Before joining the Mets, he was the 1992 High School player of the year, and hit well for the 1992 18U USA National team.
Wilson had no trouble launching the ball out of the park, hitting 17 homers in his first pro season, then at least 20 a year after that. In 1996, he played in just 23 games because of injuries to his wrist and shoulder. This had little to no impact the following season, as he hit 30 homers across 2 levels in the Mets organization, and then traveled down under for the Australian Winter League. I couldn't find any stats for his time with the Newcastle Hunter Eagles, but by the Spring of 1998, Wilson was poised to make his long awaited big league debut. He played in just 18 games for AAA Norfolk Tides before being called up in May 1998. His debut consisted of a 3 for 4 game with a stolen base and a run batted in. Each base hit, he was able to briefly visit with his dad, Mookie, who was the Mets' first base coach at the time. 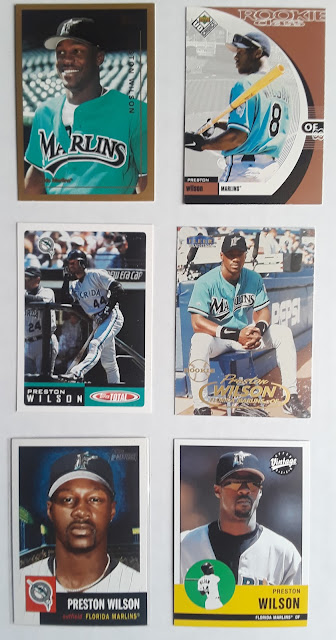 Wilson's trade to the Marlins included a demotion back to AAA, where he nearly hit 30 homers again, showing he was more than ready for a shot at the big leagues. Wilson would have an even better sophomore season, when he joined the 30-30 club in 2000. He was known for big power, but his swing also was conducive to strikeouts. In 2000, Wilson struck out 187 times, which was the most in the Majors, and nearly broke the long time record that Bobby Bonds held. Over his 4 full seasons with the Marlins, Wilson averaged 26 homers and 82 RBI per year. 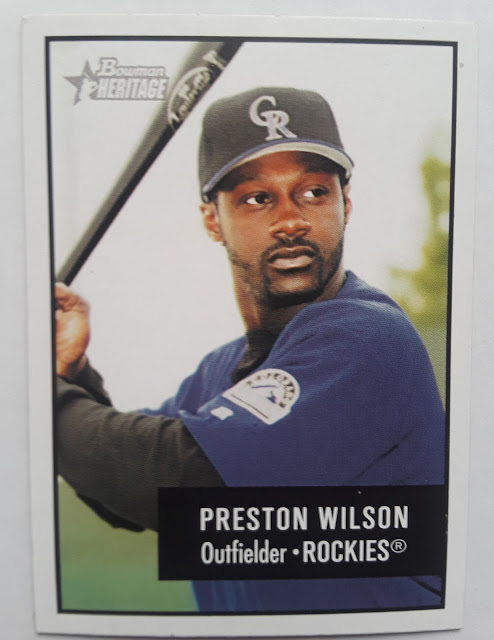 Wilson was traded to Colorado prior to the 2003 season, and the Rocky Mountain air was kind to Preston. 2003 would include career highs for Wilson across several offensive categories, and he led the National League with 141 RBI. 2003 was also Preston's lone all-star season. Wilson went 1 for 2 in the Midsummer Classic. 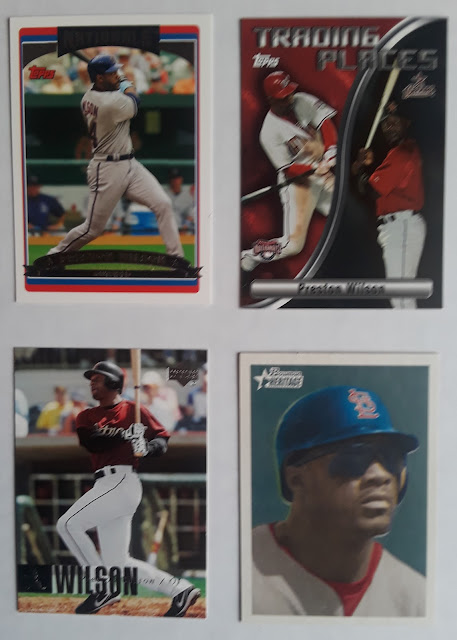 So, once a player has been a Topps All-Star Rookie, led the league in a few different offensive categories, made an All-Star team . . . what's left to check off? A World Series win, of course! Wilson started 2004 off slowly in Colorado, and was traded to the newly minted Nationals in Washington. He ended up playing what would amount to roughly one season with the Nats before being traded mid season to Houston, just in time to make a run at the post season. The Astros fell short, but the 2006 season would give Preston another chance to play the role of 2nd half star. Wilson was released at the deadline and picked up by the Cardinals, and he solidified the team's outfield rotation, providing a little power (9 homers in 33 games) and a little good old fashioned veteran leadership. Along with a strong cast of characters, the Cardinals would prevail in the World Series against the Detroit Tigers. Wilson appeared in all 5 games and picked up a pair of hits, scored a run, and drove in another.
Following the 2006 championship, Wilson returned to St. Louis for an encore, but injuries limited his effectiveness and he played in just 25 games. Wilson worked hard to get back, and even played for the Independent League Long Island Ducks for 48 games in 2009 before deciding to retire. After his playing career, the charismatic and outspoken Wilson became a regular on Houston Astros and Florida Marlins broadcasts, and has dropped in as an MLB Network analyst from time to time as well.

Wilson was recently interviewed for a Sports Illustrated article about declining participation of African-Americans in Major League Baseball, and his experiences and insights bring an important story into focus. You can read the article here -  and there's quite a bit to unpack inside. Wilson is also active on Twitter, his handle is @PrestonWilson44