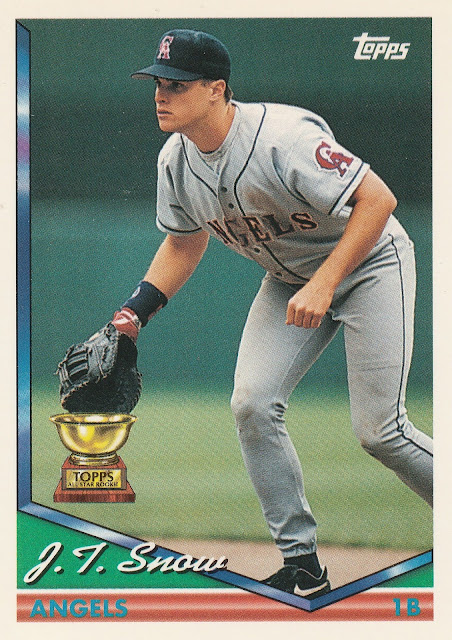 Like his teammate Tim Salmon, J.T. Snow was a SoCal kid finding his way in the big leagues close to home. Snow is the son of Rams Wide Receiver Jack Snow , and the younger Snow followed in his athletic footsteps. Snow was a 3 sport athlete in high school; the starting QB for the football team, point guard on the basketball team, and slugging first baseman for the baseball team. 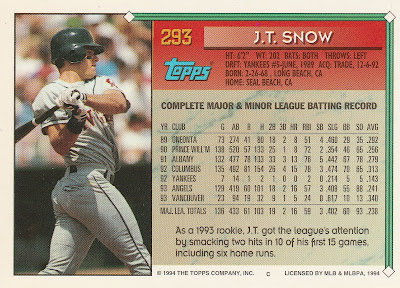 Snow's candidacy for the Topps All-Star Rookie squad was fueled by his defense as well as his still developing power bat. He probably reminded more than a few Angels fans of Wally Joyner, who had been the 1986 Topps All-Star Rookie at first base. Snow didn't set the world on fire quite like Wally did, sharing the spotlight with a wide range of young talented players in SoCal, but he hit 16 homers in his rookie season, 6 of which came in his first 15 games. While he didn't keep that pace up for the rest of his rookie campaign, there were plenty of signs that he would be a star for years to come. 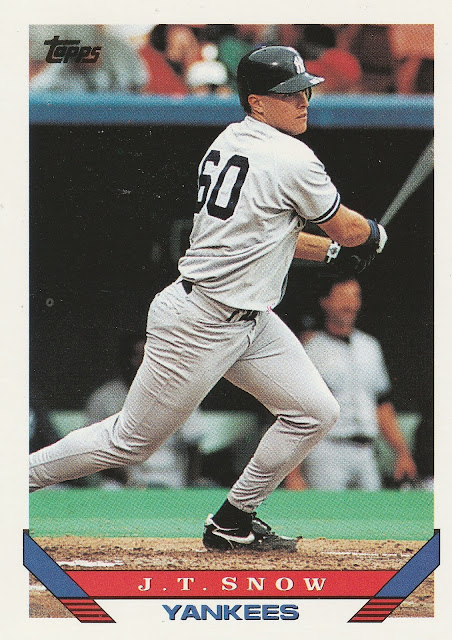 Snow made his way to California by way of Yankee stadium. He was originally drafted out of the University of Arizona by the Yankees in the 5th Round of the 1989 draft. In College, he counted Trevor Hoffman, Scott Erickson, Kenny Lofton, and Alan Zinter among his teammates. He made quick work of the Yankees' farm system, earning his MLB debut in September of 1992. He showed power in the minors, with double digits in homers in his last two seasons. The Yankees, of course, already had a pretty good first baseman in Don Mattingly, so it should not have been a big surprise that Snow would be dangled in trade offers. The Angels decided to part with Jim Abbott because the Yankees included Snow along with Russ Springer and lefty Jerry Nielson. While the pitchers did not provide much value to the Angels, Snow would be a franchise cornerstone. 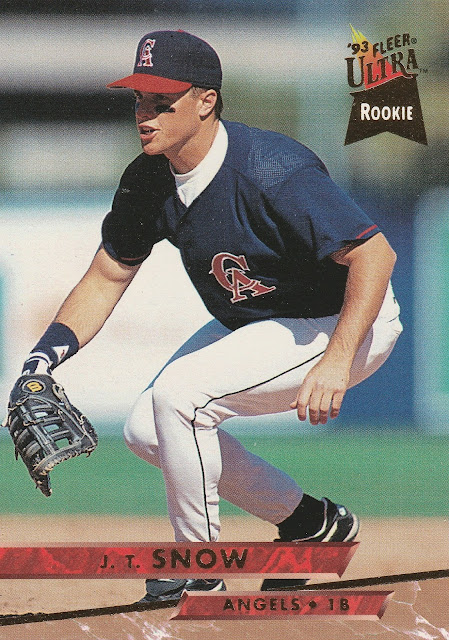 It didn't start out as a rosy relationship with Angels fans, however. They were die-hard Jim Abbott defenders, and could not see the potential of Snow outweighing the front line starter that Abbott had already proven to be. Snow's dad now was a radio talk show host in SoCal, and it got the the point where the younger Snow couldn't even listen to the radio. As the New York Times chronicles, Snow was right in the midst of his early 1993 power surge, and he credited the skeptics and the critics for fueling his fire. 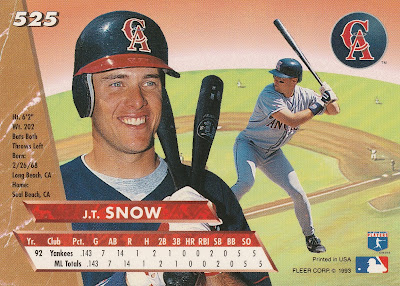 Even more juicy was this tidbit from 1994 - Snow was nearly headed back east in Spring Training to the Mets in exchange for Anthony Young! You won't find many cards showing J.T. at the plate - he was actually a very good hitter with power to the gaps, but his glove was something special. 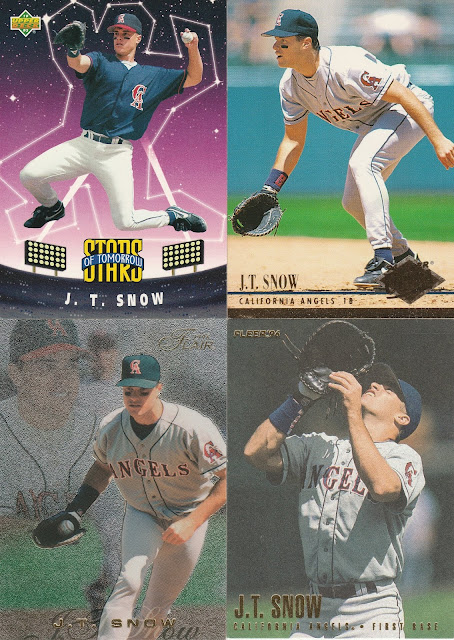 In his California Angels days, Snow would win a pair of Gold Glove awards, with just 22 errors over the 4 seasons. 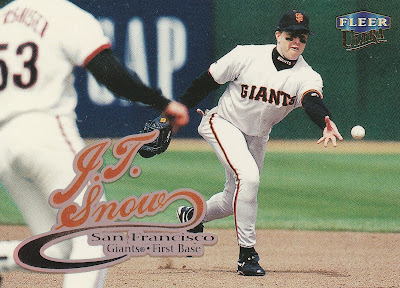 Coming to the Giants in a trade in 1997, Snow was even better in the field, and had a career year at the plate as well. He had a career high 28 homers and drove in over 100 runs for San Francisco, and made his first trip to the post season. 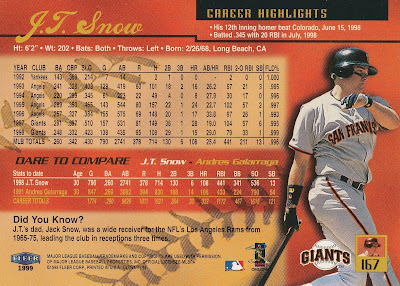 Snow's first year in San Francisco was so good that he was being compared to Andres Galarraga, when in all honesty he was more of a Pete O'Brien at the plate (not necessarily a bad thing!). Snow would win 4 more Gold Gloves with the Giants, and after a season with the Red Sox in which he played just 38 games, he came back to the Bay Area to retire as a Giant. His career fielding pct ranks 16th All-Time among first basemen.