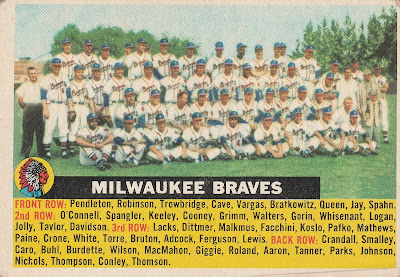 One of the fun things about a completed set is deciding how you want to organize it. I have the 1956 Topps set in a binder, sorted by team, in the same order that the teams finished in the 1955 Standings. In 1955, MIlwaukee finished in 2nd place in the National League with an 85-69 record. 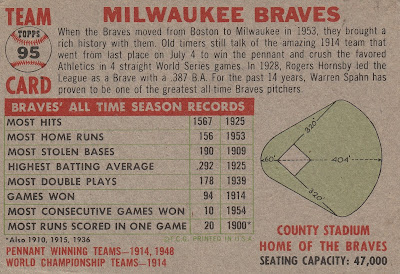 1955 was the team's 3rd in Milwaukee and they were enjoying the benefits of a rabid fan base. Rookie Catcher Bob Rosselli spoke at length about the generosity and love showered on the players in the city. The city was also selected by major league baseball to host the 1955 All-Star Game, and the fans had the chance to extend their hospitality to the rest of the Major leagues.


The team would finish in second place in 1955, and again the same in 1956 before pushing their way to the top of the National League. They would play in 2 straight World Series, winning the first in 1957, the only baseball title in Milwaukee history. 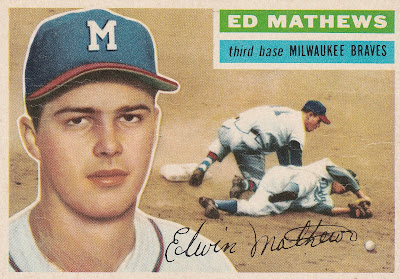 The team's best hitter in 1955 was future Hall of Fame 3rd Baseman Eddie Mathews. Mathews was one of five Milwaukee All-Stars, and cranked out 41 homers while driving in 101 runs. Just 23 years old, he led the National League with 109 walks, and scored over 100 runs as well. He led Milwaukee with 7.3 WAR. 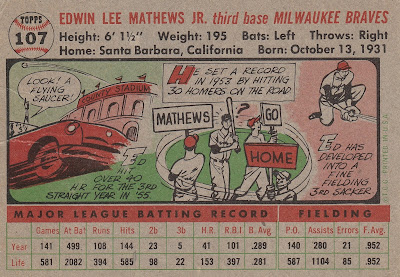 He would lead the NL in walks 4 times, and homers twice. The patient slugger would scored over 1500 career runs, and drive in over 1400 more. The 12 time All-Star would play in 3 World Series, winning once with Milwaukee and later with the Tigers in 1968. 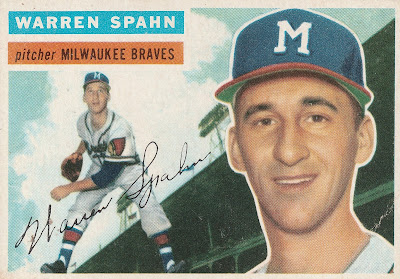 It should come as no shock that the team's best pitcher in 1955 was Warren Spahn. The ageless wonder was usually their best pitcher in the 40s and the 50s. Spahn had an atypically average year in 1955, with a 3.26 ERA and a 17-11 record. He had 16 complete games, but just 1 shutout. He would strikeout 110 batters over 245 innings, succeeding by inducing soft contact rather than blowing the ball past the hitter. 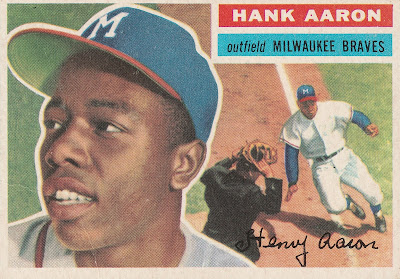 The 21 year old Hank Aaron is joined by Willie Mays on his card here. They even could have been teammates, but Aaron was offered $50 more per month to sign with the Braves. In 1955, Aaron had a very good season, driving in 106 runs while scoring 105 of his own. He hit .314 on the season. 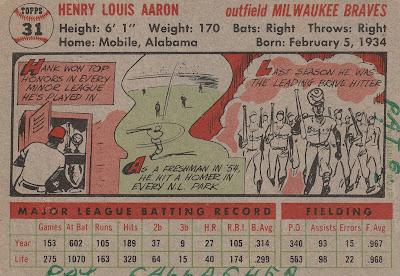 What more do you need to know about Hank Aaron? He's the All-Time leader in RBI and total bases, and easily in the top 5 greatest players ever. 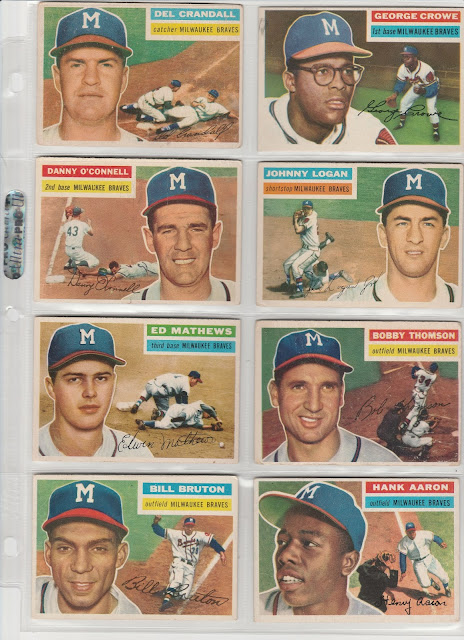 Much of Milwaukee's success in 1955 can be attributed to their potent offense. In addition to Aaron and Mathews, Bill Bruton also scored over 100 runs. Bruton had 12 triples and stole 25 bases as well, providing the team's speed. Catcher Del Crandall was a beefy slugger, smashing 26 homers. Veteran Bobby Thomson added 12 more long balls. 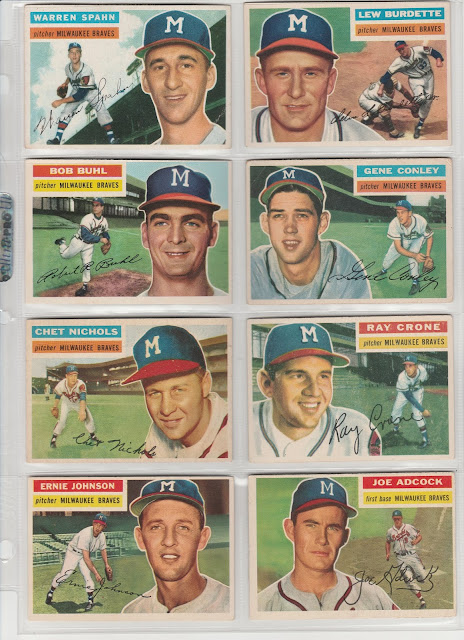 The pitching was so mundane that Topps didn't even bother to make 8 pitcher cards for the team... The team hovered around league average on the mound, with Bob Buhl leading the team with a 3.21 ERA. The best thing that can be said about them is that the starters soaked up innings. Spahn, Burdette and Buhl all had over 200 innings pitched. The relief corps wasn't much to write home about either, saving just 10 games (the starters came in to save 3 more) combined. 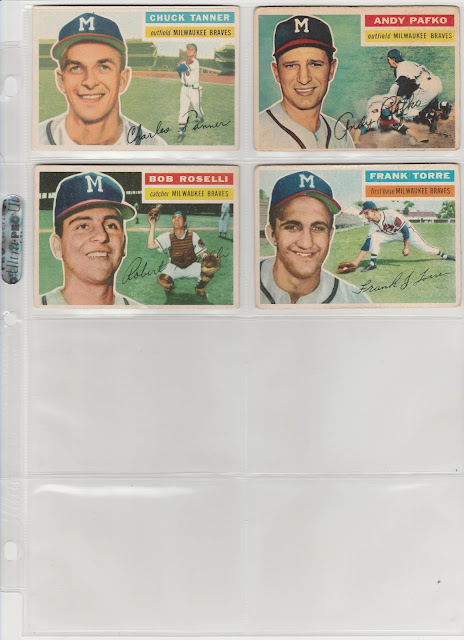 Chuck Tanner would go on to be a Manager with over 1300 wins; his best season as a player came with the World Champs in 1957.  Andy Pafko played for the team from 1953 until 1959. His first two seasons in Milwaukee, he played as a regular, and cemented his place as a fan favorite. 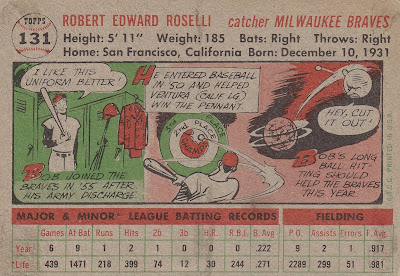 I owe you another card back (I opted to not share the images on the back of Spahn's card..), so here's Bob Roselli's card, where he's happy to be playing baseball instead of going to war, and he bruises the moon with his home run power. He'd hit just one in Milwaukee over his career, but had 12 in just 64 games in the minors in 1953.