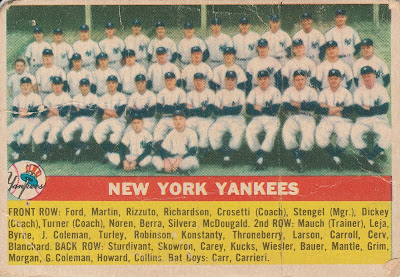 One of the fun things about a completed set is deciding how you want to organize it. I have the 1956 Topps set in a binder, sorted by team, in the same order that the teams finished in the 1955 Standings. In 1955, the New York Yankees were the American League champions, with a 96-58 record. They would lose the World Series in seven games. 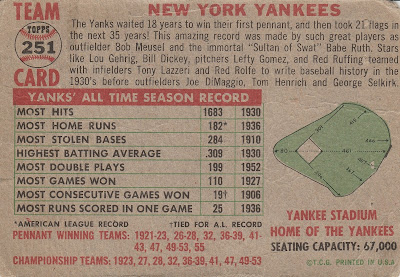 I will say only nice things about the Yankees today, an objectively great team in the 1920s, 1930s, 1940s, and 1950s. Since opening Yankee Stadium, the Yankees had won at least 3 World Series per decade, and by 1955 they had already won 3 championships and were on their way to a total of 5 World Series victories in the 50s. Few things are more "New York" than the Yankees, but how about Frank Sinatra? His album, "Songs for Swingin' Lovers," was released in 1956:


While the AL Champions did not win the 1955 series, they would not have to wait long to return to the Championship -- it would be the first of 4 straight World Series appearances, winning in 1956 and 1958. 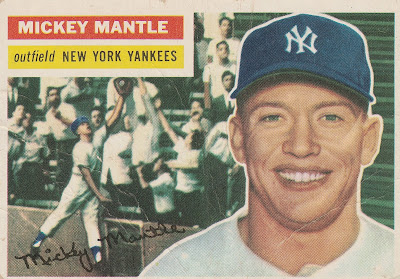 The Yankees' best hitter in 1955 was the great Mickey Mantle, who was just 23 years old and the toast of the town, He led the league with a ridiculous 180 OPS+, playing a superb center field while getting on base with a league leading .431 OBP. He hit .306 with 37 homers, and scored 121 runs. 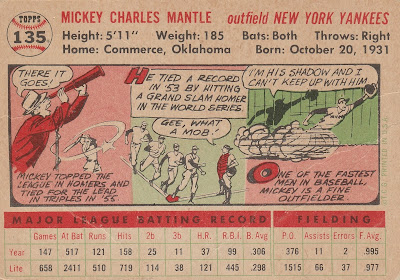 While the 1955 season was impressive, it didn't hold a candle to 1956. Mantle would win the triple crown, hitting .353 with 52 homers and 130 RBI. He scored 132 runs and his OPS+ was 210, meaning his season was 110% better than the average Major League outfielder. He'd win 3 MVP awards over his career. The well-known and well-traveled narrative is that injuries would rob Mantle of his full potential, and certainly it directly changed the 1955 Series. Mantle played in just 3 of the 7 games, and had just 2 hits in 10 at bats. For his career, the Hall of Fame, Switch hitting Center Fielder would still hit 536 homers, and have over 1500 RBI despite chronic knee and back pain. 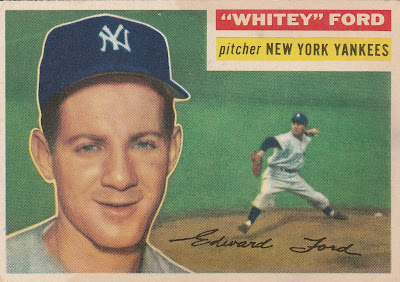 The Yankees' best pitcher shared a nickname -- The Chairman of the Board -- with Sinatra, and the lefty made his teammates sing his praises throughout his career. In 1955, Ford had a 18-7 record with a 2.62 ERA. While his 137 strikeouts in 254 innings is not eye popping by today's standards, it was among the league leaders in '55. He hurled 5 shutouts that year, and was the staff ace all season long. His 18 wins (and 18 complete games) led the AL. 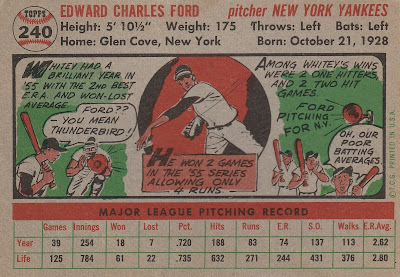 For his career, Ford had a 236 - 106 record. His 45 shutouts ranks 29th All-Time. His best season was 1961, while Maris and Mantle were chasing Babe Ruth, so too was Whitey Ford, but as a pitcher. Ruth's World Series scoreless innings streak was 29 and 2/3 innings, and Ford matched then beat it en route to a World Series MVP award. During the '61 regular season, he won 25 games and his only Cy Young Award. 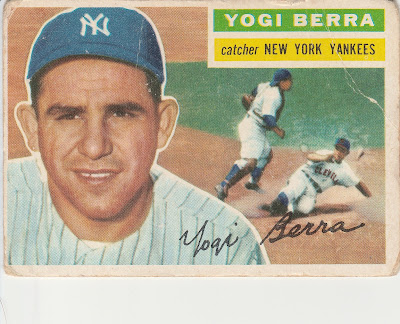 Casey Stengel, Yankees' irascible manager, was quoted often for his humor, but he also said -- "I never play a game without my man." That man was Yogi Berra. Berra led the Yankees on the field, and in 1955 had a team high 108 RBI, while hitting 27 homers. Oh yeah, and he was the AL MVP for the second consecutive season. 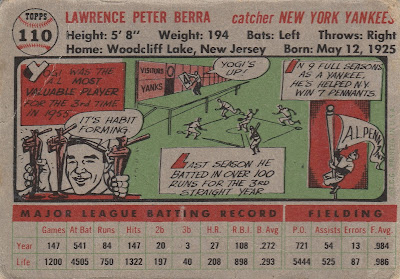 Berra is a 10 time World Champ, 18 time All-Star, 3 time MVP. As a catcher, Berra never led the league in a single offensive category, but his value was measured as much for his baseball knowledge and on-field leadership. It didn't hurt with sportswriters that he was always ready with a goofy quip, but Yogi was a tremendous baseball player regardless of his funny quotes. 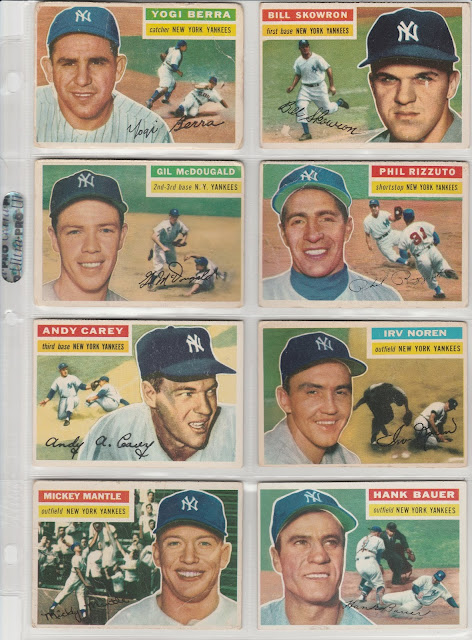 Phil Rizzuto was at the tail end of his Hall of Fame career, and 81 games in 1955, he drove in just 9 runs. Of course, Rizzuto was never known for being a great hitter, but the production had slipped to a point at which he was supplanted at Shortstop by former Oriole Billy Hunter in 1955, and by Gil McDougald in 1956. McDougald was in many ways a forgotten star in the Yankees dynasty. In 1955, he was the Yankees' primary 2nd Baseman hitting 13 homers for the Bronx Bombers. Mantle and Berra were joined by Bill "Moose" Skowron and Hank Bauer as power bats on the '55 team. Skowron had an OPS+ of 140, hitting a team high .319 - Bauer crushed 20 homers. 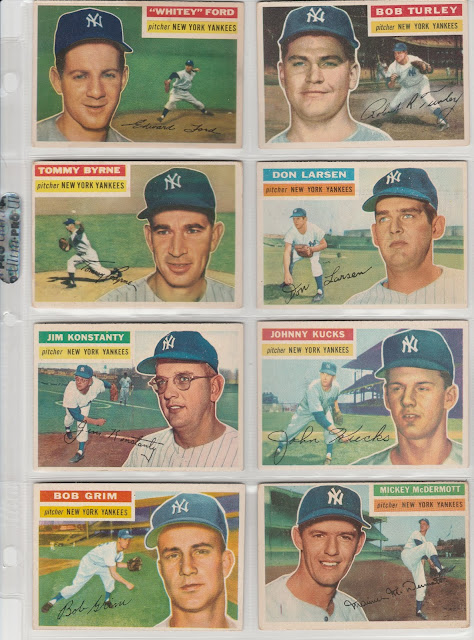 Ford was the best Yankees pitcher, but their #2 starter Bob Turley wasn't far behind. In fact, Turley struck out 210 batters and had a team high 6 shutouts. Jim Konstanty was a stabilizing force in the bullpen, saving 11 games but finishing 30 games overall with a sterling 2.32 ERA. Don Larsen was just 25, still a year award from the perfect game in the 1956 World Series that made him a baseball immortal. 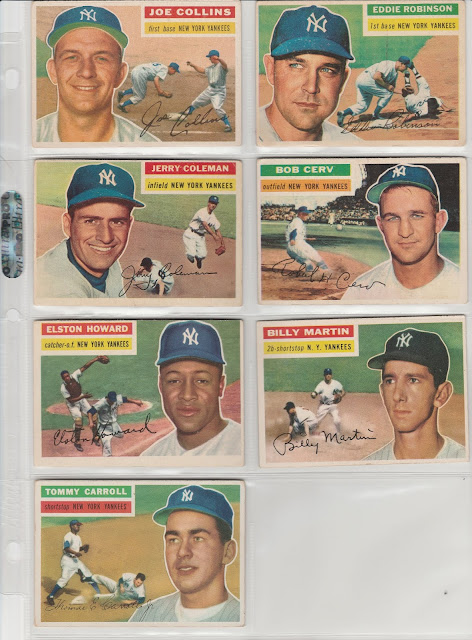 Even the Yankees' bench was stacked - with the great Elston Howard waiting in the wings to provide relief for Yogi Berra behind the plate. Billy Martin would once again become the Yankees' starting second baseman in 1956 and was already a fixture in Yankees' lore. A host of veterans like Eddie Robinson who hit 16 homers off the bench in 1955, and Jerry Coleman provided sage leadership.