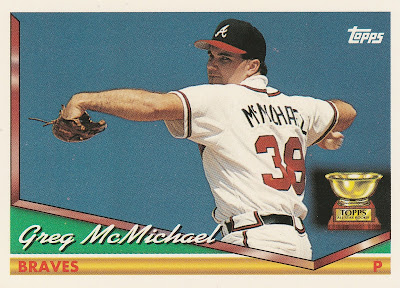 Greg's big league career was nearly over before it started. In 1990 as a starter in the Cleveland minor league system, McMichael tore the meniscus in his knee, Cleveland would grant him his release and gave him some harsh advice - to retire. 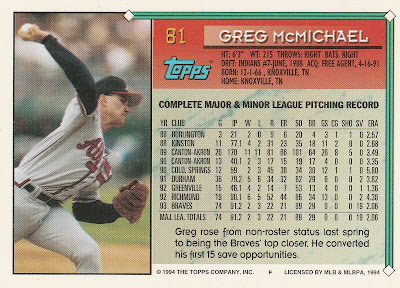 Greg had other plans, and despite the injury to his knee, he was not looking long to find a new home. He joined the Durham Bulls in 1991, picking up where he left off. Atlanta's rotation already boasted Smoltz, Glavine, and Steve Avery when they added free agent Greg Maddux. McMichael's best path to the big leagues would have to be through the bullpen. 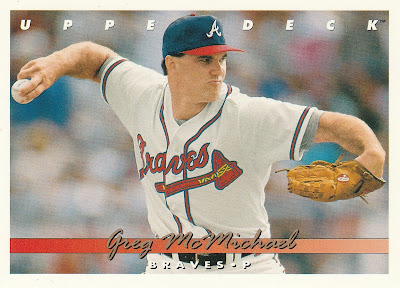 Greg was a non-roster invitee in 1993 for the Braves' spring training squad. He forced his way onto the roster by being the best pitcher all spring long. McMichael was used a middle reliever to start the season, but his ability to miss bats saw him move into higher and higher leverage situations, becoming the team's closer for the second half. 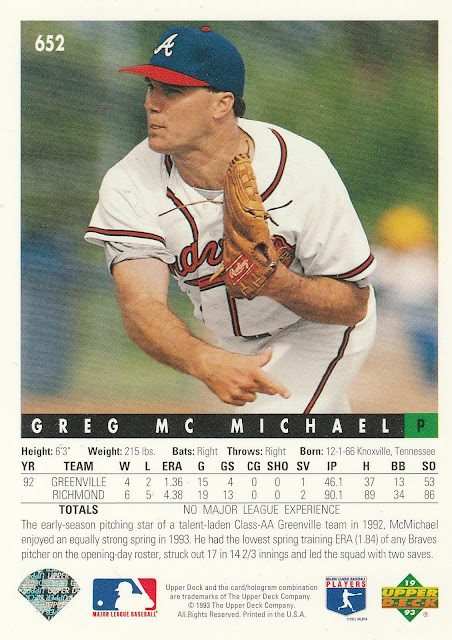 In his new role, McMichael shined. He would convert his first 15 save opportunities, and was the team's closer throughout the 1993 playoffs as well. His 2.06 ERA and 19 saves in the regular season earned him a 2nd place finish in the NL ROY balloting. 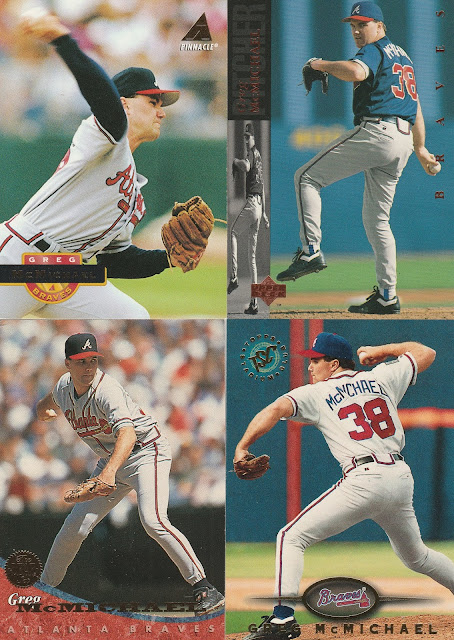 He would be the Braves' closer again to start 1994, saving 21 games to lead the team again. He'd pitch in a pair of World Series, in 1995 and 1996- and earned a save in the 1995 NLCS against the Reds. After the 1996 season, McMichael was traded to the Mets for Paul Byrd. In New York he'd have a few more solid seasons as a late innings reliever. He was traded to the Dodgers for a month in 1998 for Hideo Nomo, then traded back to the Mets for Brian Bohanon. Shoulder issues would plague the rest of his career, heading to Oakland in a trade in 1999. He'd have off-season surgery on the shoulder, then return for one last ride in Atlanta before a rotator cuff injury would force his retirement. In over 500 MLB innings, McMichael would strikeout 459 batters while surrendering just 42 homers. He retired with a 3.25 career ERA. He's now the Braves' alumni coordinator and coaches pitching at Emory.