The 1980 World Series Champions, representing the NL East, were the first Phillies World Series Champ, and in fact, quintupled the team's World Series victories, having only one win in two other appearances in the Fall Classic. The Phillies in 1980 were known as a veteran team. Their average age was just a shade under 31. Pete Rose was 39; The Ace Steve Carlton and Closer Tug McGraw were both 35, and the roster included 35 plusers Ron Reed, Tim McCarver, and Sparky Lyle. There were three rookies, however, that made their mark for the Phils in 1980. Lonnie Smith led the team with 33 steals and a .339 batting average. Keith Moreland served as Bob Boone's backup backstop, catching 50 games and hitting above the .300 mark. In the rotation, rookie Bob Walk was called up in May and rejected his name, showing good control all season long. He started Game One of the 1980 World Series and gutted out the win. The Stars carried the team, NL MVP Mike Schmidt was in the prime of his career, smashing 48 homers in the regular season, and two more in the World Series to capture the World Series MVP award as well. Steve Carlton was the NL Cy Young award winner, just one vote short of a unanimous decision. He won 24 games in the regular season, and 3 more in the playoffs. His accolades were not just in traditional stats, Carlton led the league in FIP, ERA+, and strikeout to walk ratio along with innings, strikeouts, and wins. 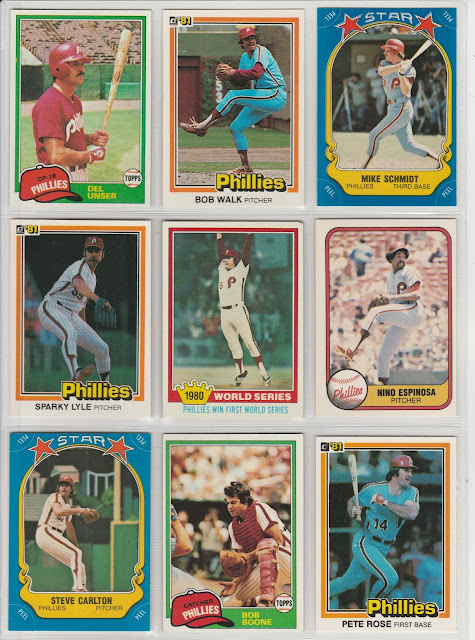 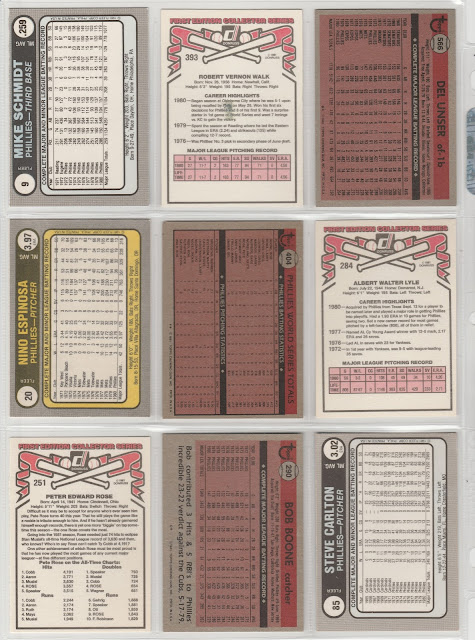 Topps #566 Del Unser - Another 35 year old, Del Unser was a utility man for the Phillies in 1980. In the late 60s / early 70s, Unser was a solid Center Fielder for the 2nd version of the Washington Senators. She shifted to the National League in 1973 and bounced from team to team in the 70s. He settled in with the Phillies (for the second time) by the end of the decade and was a valuable bench piece. This Topps card features Unser studying the opposing pitcher from the on deck circle.

Donruss #393 Bob Walk - Shown here in a start at Wrigley, Walk became a solid part of a shaky rotation. After Hall of Famer Carlton, the Phillies had a piecemeal group of starters that struggled at times. Walk was called up May 26th to try to shore up the staff, but gave up 5 earned runs and was pulled with two outs in the 3rd inning. He rebounded and had a pair of complete games, finishing the season with an 11-7 record, third best on the team.

Fleer Star Sticker #9 Mike Schmidt -  All Schmidt did in 1980 was win a Silver Slugger, A Gold Glove, the NL MVP, WS MVP, lead the league in Homers, RBI, Slugging, Total Bases, OPS+, and even Sacrifice hits! Spoiler, he won the MVP again in 1981, again leading the league in Homers, OPS, OPS+, Walks, Runs Scored, and so on. In the past, Schmidt had struggled a bit on the big stage, not having much success in the NLCS in 1976, 77, and 78. He broke through in the 1980 World Series, though, and helped the Phillies to the victory in 6 games. He definitely earned the star sticker.

Donruss #284 Sparky Lyle - Lyle was a late addition to the Phillies, coming over from the Rangers in a September trade. Down the stretch, Lyle pitched 10 times, finishing 5 of those games. Because he was added in September, he was not on the postseason roster, but his contributions may have secured the Phils' spot in the playoffs. His moustache is in mid-season form on his Donruss card.

Topps #404 Phillies Win World Series (Tug McGraw) - McGraw had arguably his best season in 1980, featuring a career best 1.46 ERA in 57 games. He recorded 20 saves, though his usage was more of a classic fireman than a "modern" one inning closer. McGraw is shown on this card after striking out Willie Wilson for the final out of game 6


Fleer #20 Nino Espinoza - Nino's first appearance in 1980 came on the 4th of July, and he tossed 8 shutout innings against the Cardinals, though the Phils took the loss in the bottom of the 10th. He finished the season in similar fashion, shutting out the Cards again for 7 innings, but the bullpen gave up 5 runs after his exit from the game. His best start came in a Complete Game victory at Shea stadium. Nino did not appear in the postseason, but his fro was championship level on this Fleer card.

Fleer Star Sticker #85 Steve Carlton - Whatever you say about Mike's Schmidt in 1980, Steve Carlton was every bit the Pitching equivalent. Cy Young winner, All-Star, and league leader in WAR, Strikeouts, Wins, FIP, ERA+ and on and on. It was The Lefty With the Golden Arm's 3rd of 4 career Cy Young awards. Carlton was the winning pitcher in Game 2 and the deciding 6th game of the World Series. Critics of this Phillies squad have pointed out that the team was "nothing special" after Carlton, Schmidt, and McGraw. But "Ya Gotta Believe" that the best Starting Pitcher, The best Position Player, and the best Closer in Baseball gives you a pretty good foundation.

Topps #290 Bob Boone - Boone was not quite the star he had been in the 70s, but his offensive decline was buoyed by a refinement of this receiving skills and his acumen as an on the field manager. He would go on to win 5 more Gold Gloves in the 80s, and though his bat was not up to his usual standards, his defense brought him back to being at least replacement level behind the plate. He would have a late career renaissance with the Angels, but his championship year was no less memorable. Topps features Boone with a gutsy play at the plate.

Donruss #251 Pete Rose - Pete Rose. What can you say? This card is great, he's got Magilla Gorilla arms. Rose came over to Philadelphia in 1979, having twice been a champion in Cincinnati, and was expected to bring that pedigree to a team that had been bounced out of the NLCS three years in a row. Rose may have been 39 years old in 1980, but he was still a machine, leading the NL in doubles, still single-mindedly chasing Ty Cobb and scratching out every possible advantage from his opponents that he could.
Posted by Brian at 7:08 PM