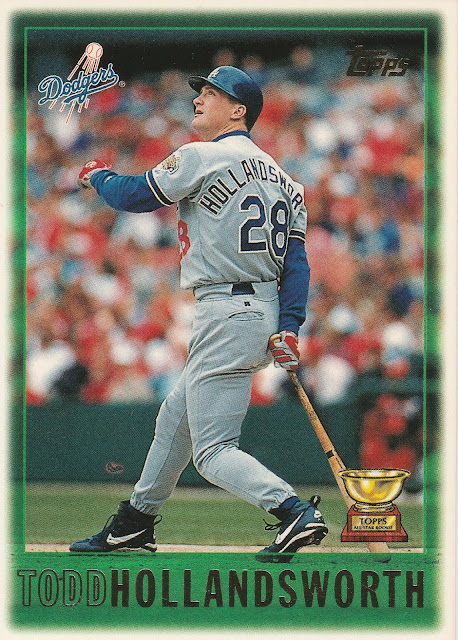 Todd Hollandsworth was the NL Rookie of the Year in 1996, joining the ever growing list of Dodger phenoms to break into the big leagues. With similar tools to 1994 RoY Raul Mondesi, Hollandsworth flashed power, speed, and a strong outfield arm. He spent a good part of 1995 recovering from various nagging injuries, in 1996 it was his turn to fill in for the regular centerfielder, Brett Butler. 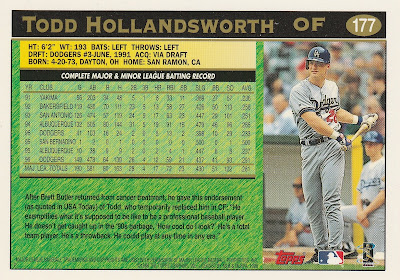 Todd hit 12 homers, stole 21 bases and had a 113 OPS+ while playing all three outfield positions. There is quite a bit of copy written bout Todd as a "gamer" aka a player who "plays the game the right way," and Brett Butler was even quoted as saying that Todd was never thinking "How cool do I look?" in a Clint Eastwood-esque get-off-my-lawn. 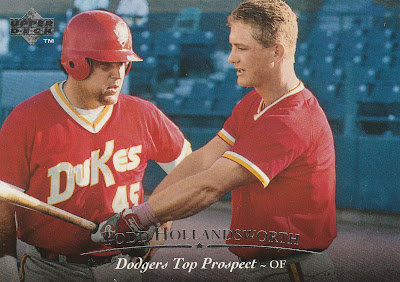 Todd had a big year in 1994 for Albuquerque, paving the way for his big league debut. He bashed 19 homers, drove in 91 runs, and stole 15 bases. It was his third season in a row with double digits in homers and steals, and he finally managed to get his strikeouts under 100 for the season. He was always a doubles machine, and had 31 for the Dukes in '94, the highest total of his minor league career. 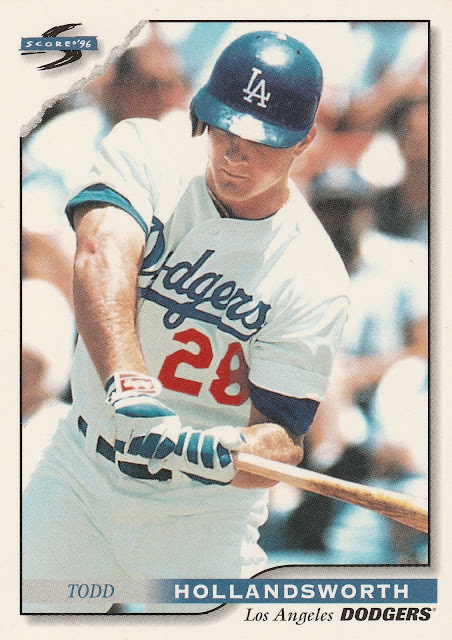 Hollandsworth was the Dodgers' 3rd round selection in 1991, having lost picks in rounds 1 and 2 as compensation for adding Darryl Strawberry and Kevin Gross. They would add a 3rd rounder though as compensation for losing Kirk Gibson to Kansas City. He was born in Dayton, OH, and went to High School in Bellevue, Washington. As a Senior he hit .368 with a pair of homers, and was named "Athlete of the Year" by the Seattle Times and was a member of the Washington All-State Team. In addition to baseball, Hollandsworth also played for the Newport High Football squad (he rushed for over 1,000 yards) and their basketball team. 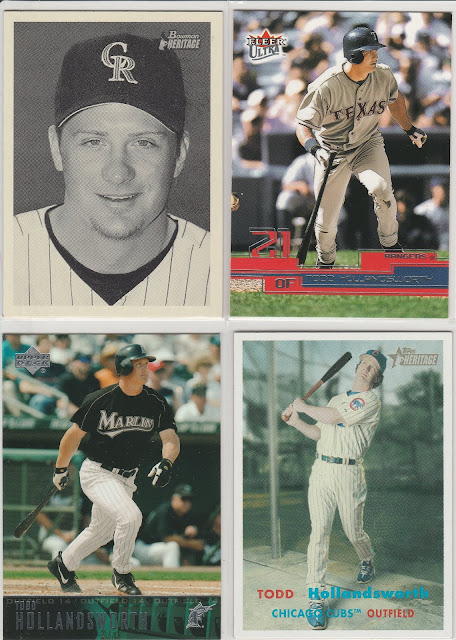 Following his Dodgers tenure, Hollandsworth spent time with 7 different teams- Colorado, Texas, Florida, Atlanta, the Cubs, and in his final MLB season, he played for both Ohio franchises. Hollandsworth didn't become the toolsy superstar hinted at by his rookie year, but he was a solid 4th outfielder for 12 MLB seasons. His best seasons were 2000, split between LA and the Rockies, and 2002, which was split between the Rockies and Rangers. The following season, Hollandsworth became a World Series Champion as a member of the Florida Marlins.

After his playing career, Hollandsworth has been a broadcaster for several teams, currently a member of the Marlins tv broadcast team.

Let's hear your Hollandsworth stories! Thanks for reading!