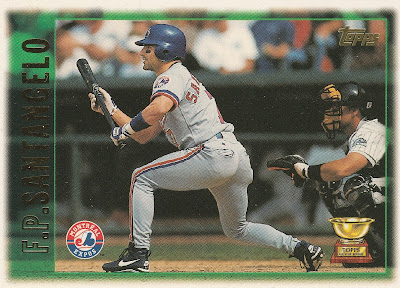 Frank-Paul Santangelo was somewhat a late bloomer in MLB terms, making his debut at the age of 27 and was a 28 year old for his rookie year. He found career highs in games played, hits, doubles. homers, RBI, and finished 4th in the Rookie of the year balloting in the NL. 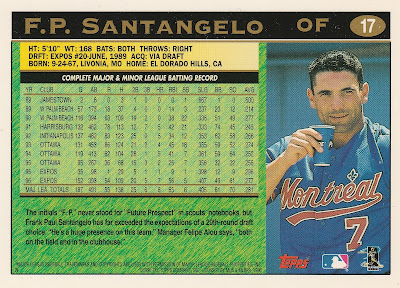 Santangelo was drafted in the 20th round of the 1989 draft, and methodically made his way up the ladder through the Expos' minor league system. He spent two seasons in West Palm Beach in Single A, one year in AA, then 4 seasons at the Triple A level before breaking through. He was single minded about making the big leagues, and vowed not to join teammates from Ottawa on their off-day excursions to the big league city of Montreal. He wanted the first time he saw the city to be as a major league ball player. 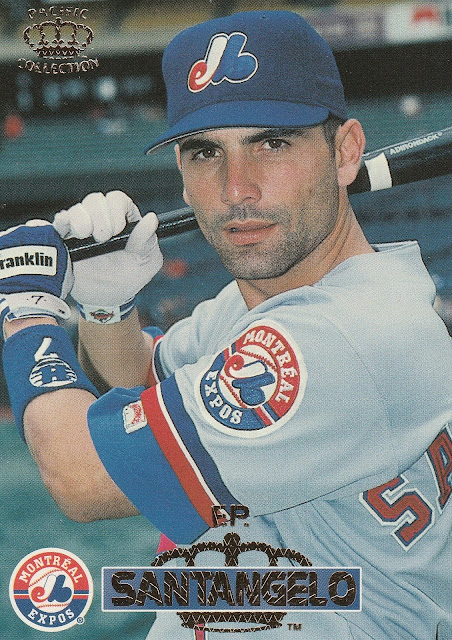 Even though he was "slow" to make it to the majors (don't forget that many never make it), he was notoriously early to arrive to practice. His manager in Single A would also be his manager in the big leagues, MLB lifer Felipe Alou. It was Alou who recognized the competitive spirit that drove Santangelo to be the first player to arrive each morning, which earned him a spot in the lineup. His first game in the big leagues against the Marlins included a pair of hits, including a triple. 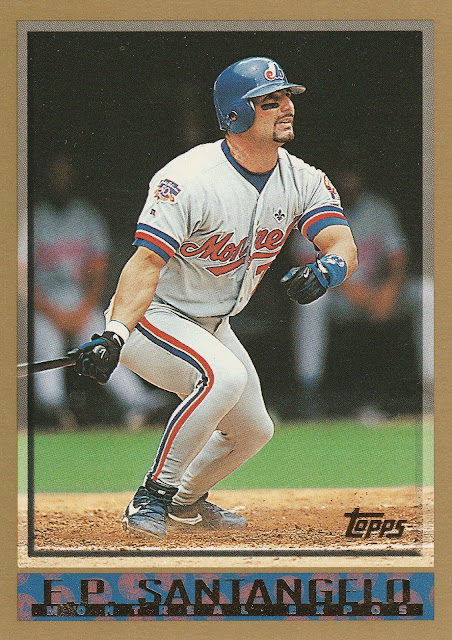 His first full season, Santangelo played six different positions for the Expos, but he was primarily a left fielder and center fielder. While he was never a major power threat in his career, the switch hitter did complete a rare feat in 1997. In a game against the Cubs that June, he homered from both sides of the plate in the same game. (well, maybe not rare for Mickey Mantle, Eddie Murray, Ken Caminiti, Carlos Beltran, Nick Swisher or Mark Teixeira - but rare for the rest of us!) Santangelo was candid about his own involvement in the Steroid Era, having been named on the Mitchell Report. He admitted to using HGH in an effort to recover from injuries on 2 separate occasions in 1997 and 2000, but stated that he was not involved beyond that. 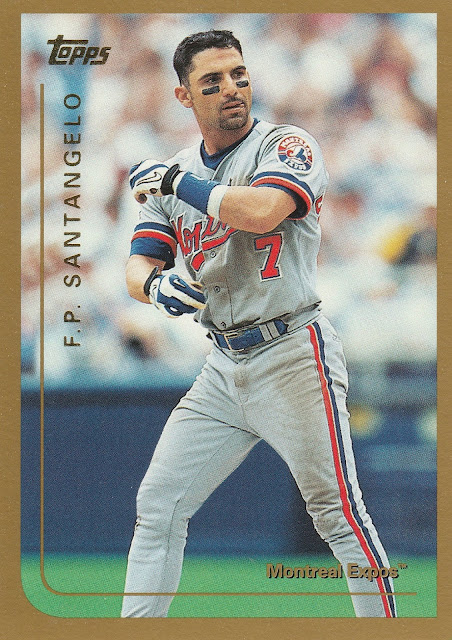 Santangelo was just getting started, but was already on the wrong side of 30 when his Expos tenure came to an end. He would go on to play one season each for the Giants, Dodgers, A's, and then for the Yankees in the minors before retiring following the 2002 season. In 2001 with the A's, he had his first taste of post season baseball, getting a double in 4 plate appearances in the ALDS. He was never very high on the MLB leaderboards, but did have a knack for getting on base the hard way. In 4 of his 7 MLB seasons he ranked in the top 10 in HBP.

Following his playing career, Santangelo went into broadcasting and has been a part of the Nationals broadcasting booth for nearly a decade. His signature call comes from his manager Felipe Alou, who would flatly declare "There goes the no-hitter" whenever his team got their first base hit of the night.