In 1980, The Brewers finished 3rd in the AL East, ultimately falling short to a pair of 100 win teams in New York and Baltimore. The following season they would come out strong, again finishing in 3rd place in the first half. They came roaring out of the gate in the second half of the season following the strike, with a 31-22 record which was the best in the division. They would fall in the divisional series to New York, the first half winners of the AL East. 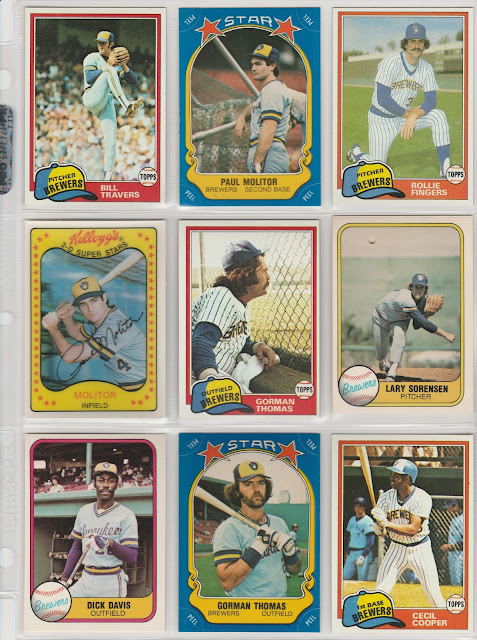 Ok so I can already hear you say "where's Robin Yount?" But I just wasn't a fan of his cards in 1981. If the series moves into the rest of the 80s, Yount will definitely see some time on these posts in the future. Ben Oglivie probably deserved some love too - He'll probably be in future installments as well.

The Brewers actually had a case for being a hard luck team - playing in the AL East with Boston, New York, and Baltimore was rough at the time. Since there were no Wild Cards, the Brewers could routinely win 90-95 games a year with a combo of speed and power to go with good pitching, and still be shut out of the post season. They'd break through in 1981 thanks to their tremendous 2nd half, and go even further in 1982. 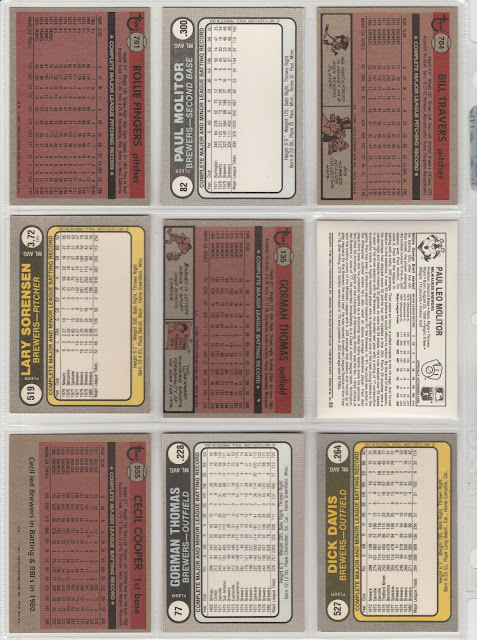 The Cards:
Topps #701 Bill Travers - Travers was the team's 4th Starter in 1980, going 12-6 with a 3.91 ERA in 154 innings pitched. He was an All-Star in 1976, and collected all 65 of his major league victories as a Milwaukee Brewer. He became a free agent following the 1980 season, and signed with Angels. He struggled to get on the field however, and made his final MLB appearance in 1983 for California.

Fleer Star Stickers #82 Paul Molitor - The future Hall of Famer from Saint Paul, MN didn't travel too far to get to the big leagues. Despite his great success over the course of his career, it was still a very bumpy ride, especially in the early days. Molitor missed 50 games in 1980 after pulling a muscle in his rib cage. Even with the shortened season, he managed to steal 34 bases and hit .305 with 29 doubles.

Topps Traded #761 Rollie Fingers - Ace relief pitchers can be overrated for the impact they have on a team's fortunes, but you shouldn't think that about Rollie Fingers and the 1981 Brewers. The AL MVP, Cy Young Winner and Saves leader had a microscopic 1.04 ERA in 1981. Fingers was brilliant, finishing 41 games for the Brewers. He came over with Ted Simmons from the Cardinals in what amounted to a log-jam clearing move by Whitey Herzog, but a team re-defining move to Milwaukee.

Kellogg's 3-D Super Stars #53 Paul Molitor - If you do the math (and who doesn't love doing the math?) counting time lost to 2 player's strikes and multiple trips to the injured list, Molitor could have played in more than 500 more games before his retirement in 1999. He finished his career with more than 3,300 hits. with another 500 games, it's possible he could have gotten close to 4,000 for his career. As it was, he has the 10th most hits all-time.

Topps #135 Gorman Thomas - From 1977 to 1982, there were few hitters in baseball more menacing than Gorman Thomas. He led the AL in homers twice, and strikeouts twice, confirming the stereotype of the big hulking slugger. In 1980, Thomas cracked 38 homers and drove in 105 Brewers runs.

Fleer #519 Lary Sorenson - Sorenson was a key part of the Brewers rotation in the late 70s, making the All-Star team in 1978 with an 18-12 record. In 1980, still just 24 years old, Sorenson would win 12 games and toss a pair of shutouts. He was also the centerpiece of the trade that brought Fingers, Simmons, and Pete Vukovich to Milwaukee. Sorenson would pitch just one season in Saint Louis, and would be on the move again for 1982, now in a 3-team deal that netted Lonnie Smith for the Cardinals.

Fleer #527 Dick Davis - At 26 years old, Davis was playing in his last productive season for the Brewers in 1980. He peaked with 12 homers and 41 RBI a year earlier, and would find his greatest success overseas playing for Kinetsu in the Japanese Leagues. In 1985 he had a career year, hitting 40 homers and driving in 109 Buffaloes. Davis would find controversy in Japan, once for charging the mound after a beaning, then for an off-field incident involving drugs found at his home that resulted in his suspension from the team.

Fleer Star Stickers #77 Gorman Thomas - Gorman Thomas made his lone All-Star Appearance in 1981, following the great season in 1980 with another solid campaign in the strike shortened 1981 campaign. Following his time with Milwaukee, Thomas had a career renaissance for the Seattle Mariners in 1985, belting 32 homers as the team's primary DH.

Topps #555 Cecil Cooper - Cooper was Milwaukee's best hitter in 1980, finishing the season with a .352 Average. He had a team leading 219 hits, and led the AL with 122 RBI and 353 total bases. He finished 5th in the MVP vote. In '81 he would lead the AL in doubles, and again hit well as the team's first baseman. Cooper's career numbers may fall a little short, but it surprises me that he was not given more Hall of Fame consideration. He'd fit right in with guys like Garvey, Dave Parker, Tony Oliva, Mattingly, and Will Clark. Maybe he's worth another look by the veteran's committee the next time around.

Well, we're getting close to the end of the list here, just a few more teams to go from each league from 1981. I plan on moving straight over to 1982 teams once these are done, will need to do a little re-organizing to be sure I've filled those pages up.
Posted by Brian at 7:47 PM