Just a quick refresher - this is a series of posts on a 1980's Frankenset. Each page features a different team, with 9 of my personal favorite cards from that year's team. You might find players repeated, you'll definitely see brands repeated, but hopefully you'll agree that there are some interesting selections from the 1980s!

The Blog once again travels to Sunny California, here are the cards of the 1981 San Diego Padres. The Padres finished 6th in the NL West in 1980, and did not fare much better in 1981. They managed to slump in the first half with a pre-strike record ten games below .500, only to fall even further after the break with an 18 - 36 record to close the season. 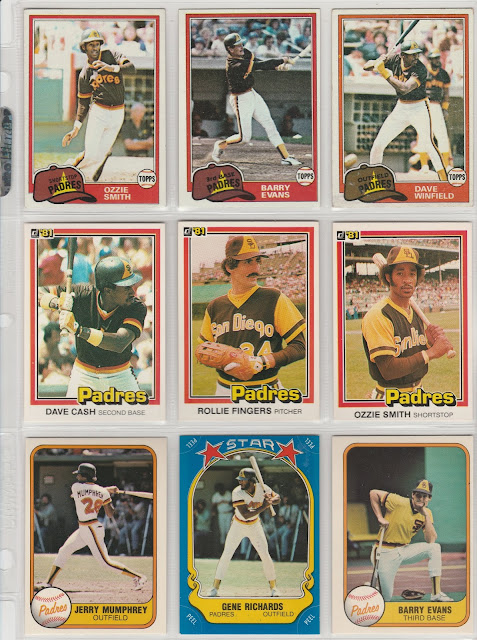 You might be tempted to ask- how could the Padres have such a tough time with 3 Hall of Famers on their roster? Well, those three - Dave Winfield, Ozzie Smith, and Rollie Fingers - were playing at a Hall of Fame level. Winfield led the team in homers and RBI in 1980, and was top 10 in the NL in several offensive categories, and also was a Gold Glove winner in the outfield. He would leave San Diego for the New York Yankees beginning with the 1981 season. Ozzie Smith did not hit for average with Padres, but he did actually reach base at a respectable clip given his contact struggles. Once on base, he terrorized opposing defenses, stealing  57 bags in 1980, and 22 in the strike shortened 81 Season. Smith would also win his first of 13 straight Gold Gloves at SS in 1980. Rollie Fingers was a tremendous closer on a team that did not have many leads. 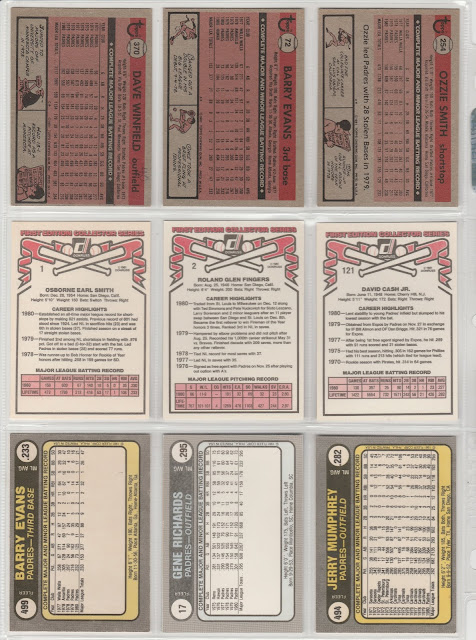 The Cards:Topps #254 Ozzie Smith - The Wizard of Oz was brilliant again for the Padres in 1980, with speed on the basepaths and sterling defense up the middle. In 1981, Smith led the NL in games, at bats, plate appearances. On defense, he was the NL leader in Range Factor, fielding pct., and assists. He is the All-time MLB leader in defensive WAR among shortstops.  He was inducted into the Hall of Fame in his 1st year of eligibility with 91.7% of the vote.

Topps #72 Barry Evans - There were fewer cards for the Padres than for any other MLB team in 1981, so the pickings were slim. Most of the Topps photos of the hitters were shot from the first base camera well. Evans is swinging hard, but it looks like he might have just rolled over on one. Evans was a utility infielder for San Diego in 1980 and 1981. His batting average climbed nearly 100 points from 80 to 81. In 1979, he refused a demotion to the minors by announcing that he was retiring from baseball to play pro tennis.

Topps #370 Dave Winfield -  Winfield's San Diego career ended in 1980, after peaking in 1979. He finished 3rd in the NL MVP vote, trailing the co-winners Keith Hernandez and Willie Stargell. He was the NL leader in RBI, Total bases, intentional walks and OPS+. His free agency move to New York proved to be a mixed blessing - while he was a perennial All-Star and went from last place to a World Series team, Winfield had a tumultuous relationship with Yankees owner George Steinbrenner.

Donruss #121 Dave Cash - The 3-time All-Star concluded his MLB career in 1980 with the Padres, hitting just .227 as the team's everyday second baseman. He was a instrumental part of the late 70s Phillies teams, and led the NL in base hits in 1975. He was also the 1970 Topps All-Star Rookie at 2B during his tenure with the Pirates.

Donruss #2 Rollie Fingers - Fingers converted 23 of 29 save chances in 1980, and sported a 2.80 ERA. He would be traded to Saint Louis, then flipped to Milwaukee before the 1981 season, where he would continue to dominate the back end of games. Fingers led the AL in saves in 1981 with the Brewers with a miniscule 1.04 ERA.

Donruss #1 Ozzie Smith - The famous knock on Ozzie Smith was that he was all glove and no hit. It is true that he did not hit well early in his career, but he did work and refine and improve as a hitter over the years. His average as a Padre was just .233, but as a Cardinal he hit .272. Add in his clutch post-season homer in the NLCS, and you get a more forgiving story.

Fleer #494 Jerry Mumphrey - The 1980 everyday Center Fielder for the Padres joined Dave Winfield in New York, coming to the Yankees in a a big trade. Mumphrey hit .298 and stole 52 bases in 1980 for the Padres, having come to them via trade that off-season from Cleveland. Mumphrey was traded 5 times between December 1979 and 1985, finally landing in Chicago with the Cubs for 3 seasons. He would make the NL All-Star squad in 1984 as a member of the Houston Astros.

Fleer Star Stickers #17 Gene Richards - So, Mumphrey stole 52 bases, Ozzie stole 57 . . . and neither one led the team that year. Instead, it was Gene Richards, who swiped 61. He was also the only regular Padres hitter to crack .300 on the season. In 1981 he stole 20 more bags, and led the NL in triples with 12. He'd finish his big league career in 1984 with a season in San Francisco.

Fleer #499 Barry Evans - Evans would also move to the Yankees to join Winfield, arriving a year later. Evans would accept a minor league assignment this time, and would spend a few years in the Yankees, then the Cleveland minor league system. Evans is shown here, possibly wishing he stuck with tennis?

Any requests for the next team to cover?
Posted by Brian at 5:02 PM