This week we return Sunny California, and check out the Swingin' A's of Oakland. Here are the cards of the 1981 Oakland A's. The A's finished 2nd in the AL West in 1980, and built on that record to win the Division in 1981. They surged in the first half with a pre-strike record fourteen games above .500, only to slump after the break with a 27 - 2 record to close the season. They were in 1st place for the 1st half, then 2nd place for the 2nd half. They would face the Kansas City Royals in the Divisional playoffs, sweeping KC to play against the Yankees in the ALCS. 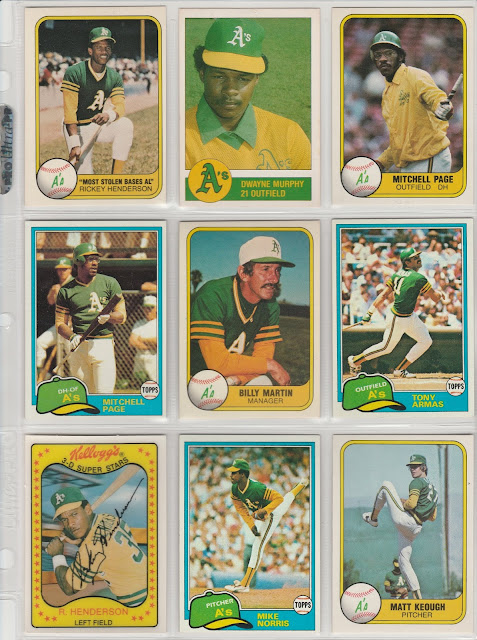 Similar to the White Sox, which were covered last week, the A's were a team going through new ownership in 1981. Long-time A's owner Charlie Finley, who moved the team to Oakland from Kansas City, sold his ownership stake to Walter A. Haas, Jr. The 1981 season was also known for the style of play that their manager demanded. It was the short-lived but very exciting era known as "Billyball." 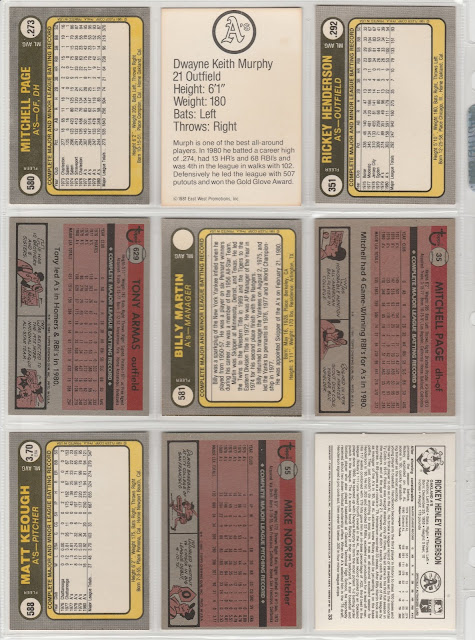 Granny Goose #21 Dwayne Murphy -  The A's had one of the few 1981 team issue sets outside of the big 3 of Topps, Donruss, and Fleer. Granny Goose had potato chips and Oakland A's baseball cards. Dwayne Murphy finished second on the team to Rickey for stolen bases and runs scored. Murphy would also take home the first of six consecutive gold gloves in 1980.

Fleer #580 Mitchell Page - Born in Los Angeles, attending Compton Community College and Cal Poly university, Mitchell Page also spent all but 16 of his career MLB games in Oakland. Page was used primarily as a DH by the A's, and by 1980 this was his exclusive role as injuries had limited his mobility in the field. He would slump in the first half of 1981, and by the time games resumed, Page's role was handed over to Cliff Johnson. Page would spend the next couple years in AAA Tacoma. After his playing career, he would coach in Tacoma and elsewhere.

Fleer #581 Billy Martin - I just love a good manager card. Billy Martin was only the A's manager from 1980-1983, a gig between stints as the Yankees' on-again, off-again skipper. But 1981 was a magical year for the A's, who had been bitten by free agency in the late 70s, but still could boast a talented corps of young players. It would be Billy Martin's aggressive style was well-matched for Rickey Henderson and the rest of the A's.

Topps #629 Tony Armas - We've now looked at the entire starting outfield for Oakland in 1980 and '81. Tony Armas flourished in 1980, hitting 35 homers and driving in 109 runs. He'd follow it up by finishing 4th in the MVP vote in 1981 -leading the AL in home runs as the middle of the order thump for the division winning A's. He also led the AL in RF outfield assists in 1980 and topped the league in Range Factor both seasons. He was the big name going to Boston in return for Carney Lansford - a deal that would bear fruit for both franchises.

Kellogg's 3-D Super Stars #33 Rickey Henderson - This was just a cool card. Henderson was just 21 in 1980, but may have been the best player in baseball. He didn't hit for power (yet), but he completely upended the game plan of the opposition.