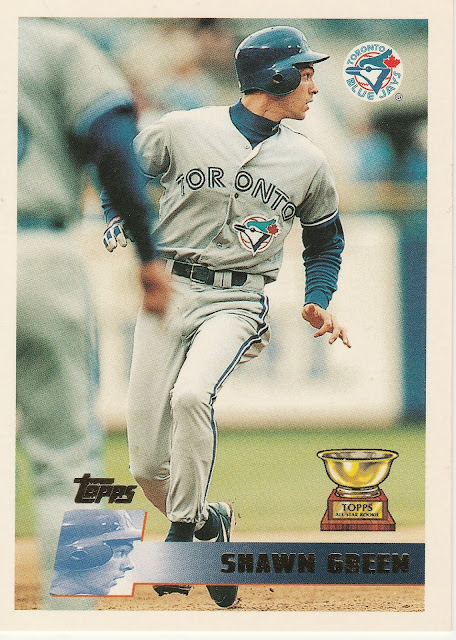 Shawn Green showed that you didn't have to be muscle-bound to be a powerful hitter. Green was 6'4" and 190 pounds soaking wet for his rookie season, but he still slugged .509 in that first exposure to major league pitching. He set a team record for extra-base hits as a Rookie, thanks to 31 doubles, 4 Triples, and 15 homers. He was a perfect fit for the 1995 Topps All-Star Rookie Team, combining the prestige of a 1st Round Pick and a solid production line at the plate. 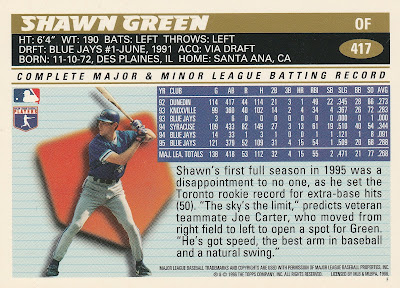 The MLB draft can be a real minefield for franchises hoping to turn their fortunes around,  prospects that seem like they can't miss, often do. Such was not the case for Shawn Green, who fulfilled the promise from his prep career. In 1990, Green was the star of the U.S. team in the World Junior Championships, hitting .482 with a tournament high 17 hits, and stole 8 bases over the 9 games. 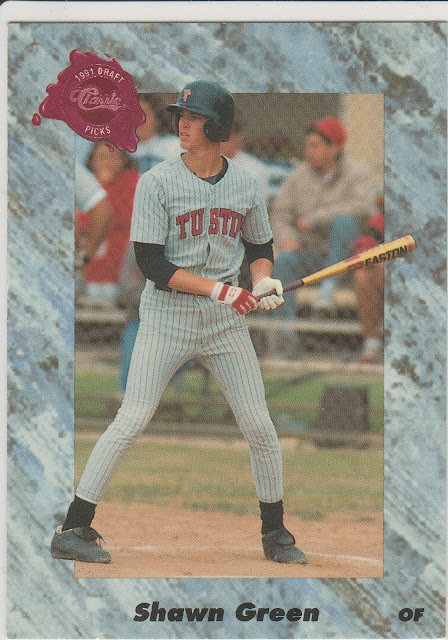 Green was named to the 1991 All-County Baseball team for Orange County, CA by the LA Times, along with Aaron Boone and several of the Los Angeles area's top prep stars. At the time, Shawn Green was the County's all time hit leader, and was known for his great skill for making contact. His low strikeout totals were almost Joe Mauer-esque - he only whiffed twice as a senior, and just 20 times over all 4 years in high school combined. Green had a batting cage built in at his home, and painstakingly developed his bat to ball skills. 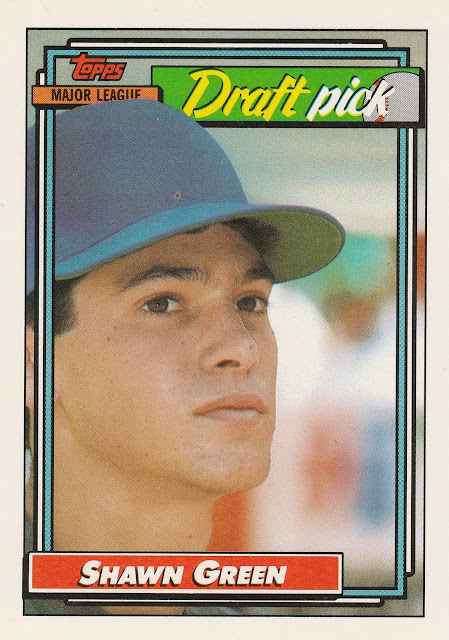 The Blue Jays drafted Green 16th Overall in the 1991 MLB Draft, and as much as they liked his contact ability, they also believed he would develop power. At first it seemed that the bet would not pay off - In his first professional season, Green slugged just .345 over 114 games in High-A. He did steal 22 bases, however, and still displayed 4 out of 5 tools with his trademark high rate of contact to go with some excellent work in field with his glove and his arm. Patience would pay off quickly, as his age 21 season featured the complete package. He slashed .344/.410/.509 with 13 homers and 19 stolen bases. He won the International League's batting title and his sweet lefty swing was drawing frequent comparisons to fellow Blue Jay John Olerud. He was ready to be called up to the big leagues for the 1995 season. 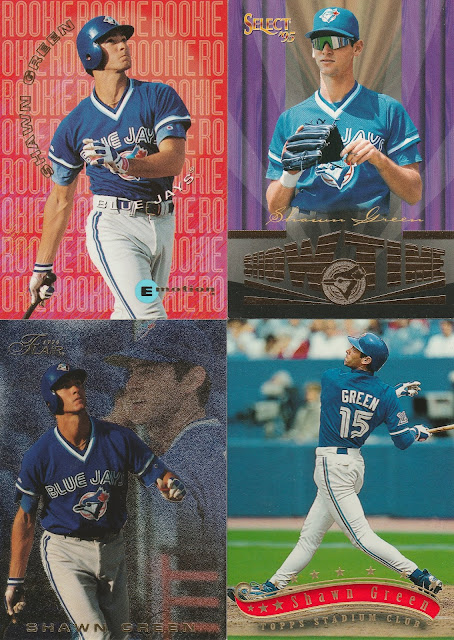 Over his 7 years in Toronto, Green saw his playing time increase as he had to prove his ability against tough lefties. By 1998, Green was ready to blossom. He crushed 35 homers and topped 100 RBI for the first time in his career. In 1999 he made his first All-Star squad and led the AL in doubles and total bases. He also took home a Sliver Slugger and a Gold Glove for the year. 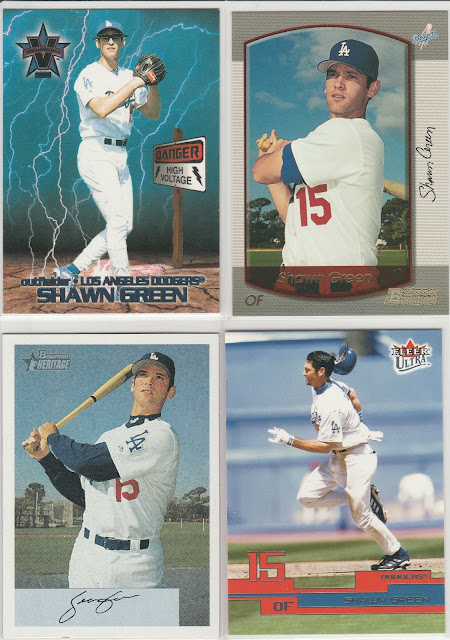 The Dodgers and Blue Jays made a deal with Shawn Green returning to Southern California in exchange for Raul Mondesi. His first season in Los Angeles featured some big highlights and some rough times. He homered in 5 straight games, hit the 2nd most doubles in Dodger history to date, and played all 162 games. In 2001, he found himself in the headlines for a game he did not play. Despite having played in 415 consecutive games, Green honored his Jewish faith and sat out during Yom Kippur, ending the streak but making a statement for younger Jewish fans (and truly, fans of all faiths) to possibly emulate. He would set a team record with 49 Home runs that still stands today. Green would return to the All-Star game in 2002. That season, Green would also have one of the greatest single game hitting performances in MLB history, hitting 4 homers and setting an MLB record with 19 Total Bases against the Milwaukee Brewers. 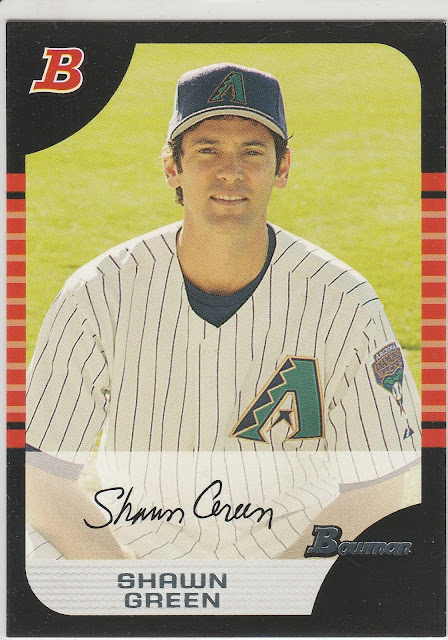 Over parts of 2 seasons in Arizona, Green had 33 homers and drove in 124 runs. Green would play in 273 games with the D'Backs, and his speed of his early years was nearly gone, he still played a full season in the outfield without committing an error. 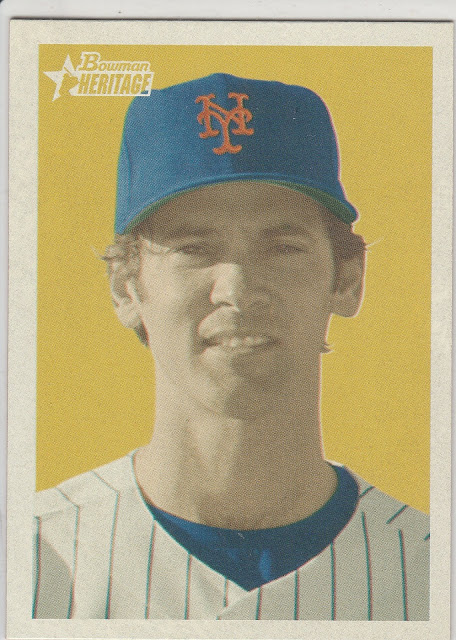 Shawn Green finished his pro career playing for the New York Mets - and though his power numbers faded, but he continued hit for a decent average and reached the 2,000 hit mark in 2007. He is a member of Jewish Sports Halls of Fame in Northern California, Southern California, as well as the National and International Jewish Sports Halls of Fame. He had 4 seasons of more than 100 runs Scored and 100 RBI, and was just the 10th player in MLB history (at the time of the feat) to hit 35+ homers and 35+ stolen bases in a single season.