NOW That's What I Call A Milestone

I am pretty good at keeping up with the Twins' new cards from Topps NOW, but every once in a while I make an exception for other teams or players. To be honest, I've never been a fan of C.C., since he's been with Cleveland and after a brief stint in Milwaukee with the Yankees. Tough position for a Twins fan to be in - but I have to say I have great respect for Sabathia, as much as I have wanted him to have a bad night when he's pitching against my favorite team. 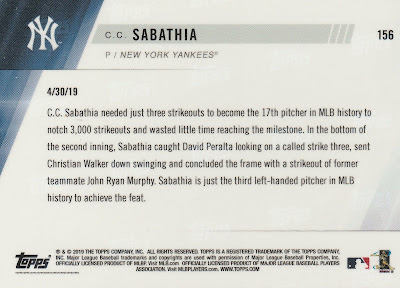 3,000 strikeouts is quite the feat. More exclusive than 3,000 hits, with Sabathia being just the 17th pitcher in MLB history to reach the milestone. Even more exclusive, he's just the 3rd lefty - Randy Johnson and Steve Carlton being the others. 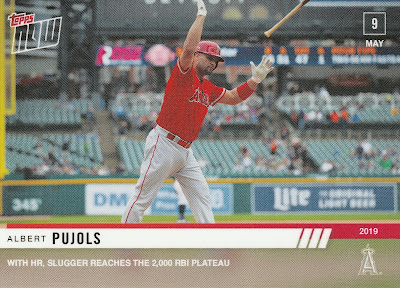 Speaking of 3rd - Albert Pujols is now ranked 3rd* on the RBI list. He's not exactly the Machine he once was, but 2,000 RBI is nothing to sneeze at. I really like this photo, which captures Albert flipping his bat in ... relief? Having blasted a home run to pass 2,000. 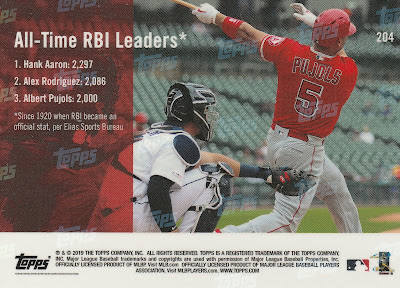 The list of course is missing Babe Ruth - (and Cap Anson), who also drove in more than 2,000 runs in his career. Before 1920, the Runs Batted In statistic was not counted in a consistent way from game to game, so the RBI the Sultan of Swat accumulated prior to 1920 are not included on this list. Pujols is likely going to pass A-Rod for 2nd overall some time next season (if he doesn't retire first). Pujols is another guy, like Sabathia, that I've never been a big fan of the teams he's played for. But, 2,000 RBI is great, and not likely to be repeated.