This is a series of posts on a 1980's Frankenset. Each page features a different team, with 9 of my personal favorite cards from that year's team. You might find players repeated, you'll definitely see brands repeated, but hopefully you'll agree that there are some interesting selections from the 1980s!
In 1981, The Mariners finished in 6th place in the AL West, with a  44-65 record. The "highlights" of the season included Manager Maury Wills being ejected for enlarging the batters' box, having all their equipment stolen on a road trip to Texas, and Rick Honeycutt taped a thumbtack to his hand during one of his starts to get a little extra break. Well, I take that back, there was one highlight - Jacket Night! 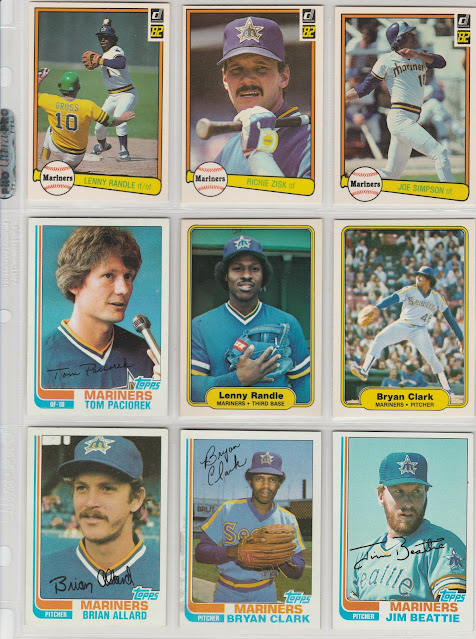 In 1982, the Mariners improved a bit, finishing 4th in the AL West with a record just 10 games under .500. Rene Lachemann, who replaced Maury Wills early in the 1981 season, managed the team again. They had several young new pitching prospects, and one very very old one - 43 year old Gaylord Perry. Perry would pick up his 300th career victory that season. The team wasn't looking to win a pennant that year, just to build a foundation for the future. 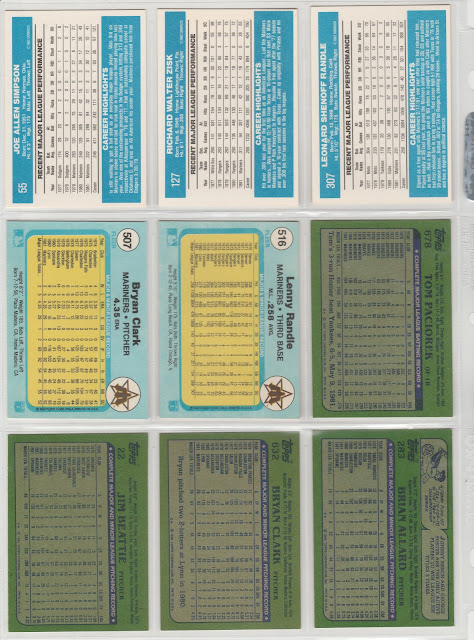 The Cards
Donruss #307 Lenny Randle - Randle's last two MLB seasons came with the Mariners in 1981 and 82. He played in 82 games for the 1981 squad, filling in at third, second and in the outfield. Randle  came up with the Washington Senators / Texas Rangers franchise, making his debut in 1971. He had several good seasons as a utility player and was known for his speed on the bases, and in 1981 for this blooper.
Donruss #127 Richie Zisk - While the Mariners had a tough time in their early days scoring runs, adding Zisk  gave them a big boost. The 2-time All-Star spent three seasons with the Mariners, leading the team in Homers his first two years. Zisk had an OPS+ of 140 in 1981, which placed him near the top ten in the league and was his highest since his second full season. Zisk began his career in Pittsburgh, and had several good seasons in the mid 70s as their left fielder.
Donruss #55 Joe Simpson -  Simpson was a fixture in the Mariner outfield from 1979 through 1982. He was an All-American in College with the University of Oklahoma, and is known now more for his broadcasting with Seattle and now Atlanta for the past 25+ seasons. Simpson's best years in 80 and 81 included extremely efficient base stealing (over 80% successful) . His final MLB season came in Kansas City, where he made two appearances on the pitching rubber in addition to his regular gig in the outfield. After several seasons in the Dodgers' minor leagues, the Mariners acquired him in 1979 to help the team as they went through their expansion growing pains.
Topps #578 Tom Paciorek -  Tom was the Mariners' best hitter in 1981, hitting .326 in a team leading 104 games. His 13 stolen bases were a career high to go along with a tenth place finish in the AL MVP race. He was an All-Star in 1981, finding himself placed highly across the AL leaderboard in several categories. The Mariners picked him up as a free agent in 1978 and traded him prior to the 1983 season for a trio of young prospects. Paciorek would be a key member of the '83 White Sox team that made the post season under Tony LaRussa.
Fleer #516 Lenny Randle - Lenny was a showman and a unique character in baseball throughout the 70s and 80s. Though his final MLB season was 1982, he also played a big role in legitimizing the game overseas, playing in Italy for several seasons and also made an appearance as a player in the short-lived Senior league back in the states. He became a manager of his old Italian team in 2014, having previously managed and coached in the minor leagues in the U.S. notably for Waterloo where he re-created his famous defensive play for a baseball card.
Fleer #507 Bryan Clark - The fortunes of many expansion teams would rest on the shoulders (and arms) of its young pitching. Bryan Clark was one of those arms for Seattle in the early days, acquired in 1978 from the Pirates. Clark would make his big league debut with the Mariners in 1981, and had 3 seasons with the club, splitting time between the bullpen and the starting rotation. He was excellent in 1982 for the Mariners, tossing over 114 innings with a 2.75 ERA. He started just 5 games that year, but one of them was a complete game shutout in September against the Toronto Blue Jays.
Topps #283 Brian Allard - 1981 was Allard's final MLB season, and he pitched well for the Mariners in limited action. He had just 7 starts, but tossed a complete game in May against the Royals for his 2nd victory of the season. He would pitch for the Mariners' AAA team for several seasons before becoming a pitching coach for several organizations in the minors. If not for an elbow injury that June that ended his 1981 season, he may have had a bit more momentum in the coming seasons.
Topps #632 Bryan Clark - Clark was known for an intimidating fastball and some shaky control early in his professional career. The California-born Clark made his MLB debut against the the Angels - but did it in an unexpected way. He was used as a pinch runner in the game by manager Maury Wills. He was a strikeout artist, but also uncorked a lot of wild pitches. He pitched 8 MLB seasons and finished with a 20-23 record and 4.15 ERA in 516.1 innings.
Topps #22 Jim Beattie - Beattie was with Seattle from 1980 through 1986 as a regular member of their starting rotation. In 1982, he was slated to be the team's #2 behind Floyd Bannister. Beattie had a couple seasons with the Yankees before being traded to the Mariners in 1979, and even pitched in the World Series in 1977 and 78. He had some great seasons with the Mariners, but he had poor W-L records as team struggled to score runs. Beattie tossed 7 career shutouts. After his playing career, he became a Farm Director for the Mariners for 5 years, then became a General Manager for the Expos and Orioles. Some of the notable draft picks during his Expos tenure included Milton Bradley, Brandon Phillips, Grady Sizemore, Cliff Lee, and Jason Bay.
Posted by Brian at 7:38 PM