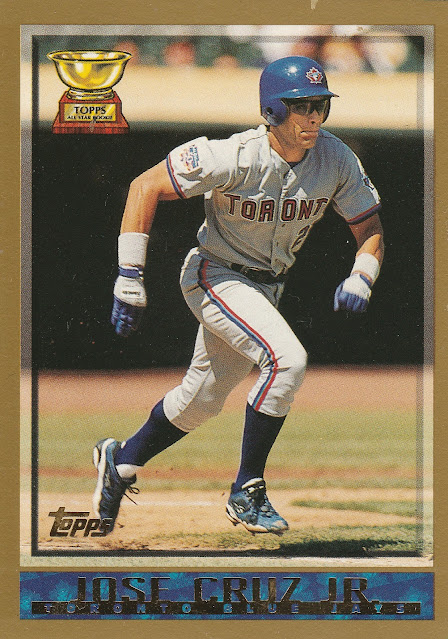 Second generation stars are nothing new in Major League Baseball. Being the child of a big league player gives a guy a leg up - not only by having access to major league ballparks, but also having the best of the best as examples after which to model their game. At the same time, the kid has to put in the work. Jose Cruz, Jr. did exactly that, and even made the Topps All-Star Rookie Squad playing for two different teams in 1997. 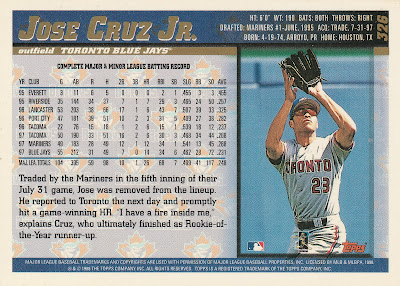 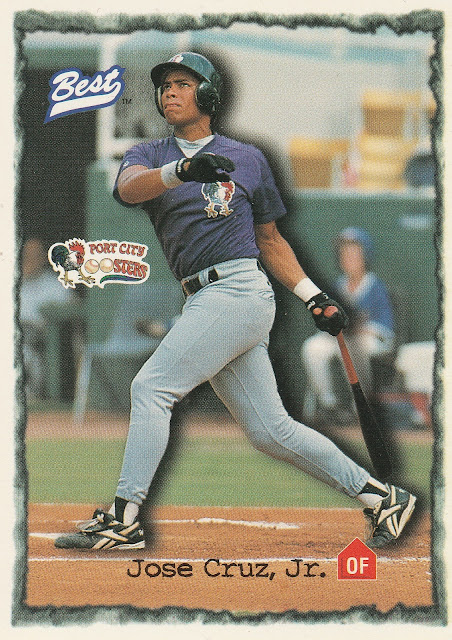 The Mariners selected Cruz #3 Overall out of Rice University in the 1995 MLB draft. The team was sitting on an embarrassment of riches, with Ken Griffey, Jr just starting his peak, and a young Alex Rodriguez just starting his MLB career. Cruz was another super talented athlete, setting several offensive records as a 3-time All-American in college. He played for Team USA in 1994, and was a highly regarded prospect. In his first full professional season, he went from single-A all the way to AAA Tacoma, hitting .293 with 15 homers and 13 steals across all levels. His amazing season ended with being named the Mariners' Minor League Player of the Year in 1996. He moved quickly through the minors and made his MLB debut at the end of May 1997.

His Mariners career was short but sweet - in just 49 games he slugged .541 with an OPS+ of 120. Cruz would spent the start of 1997 with 50 games in AAA Tacoma before his call-up, but proved he was ready for Major League pitching with his 25 extra base hits in his first 49 MLB games. He was traded to Toronto at the trade deadline for a pair of pitchers, in theory to shore up the Mariner bullpen for a playoff push. The team did win the AL West but were bounced from the ALDS by the Orioles in 4 games. To replace the bat of Cruz, the Mariners acquired veteran Roberto Kelly from the Twins in an August waiver deal. 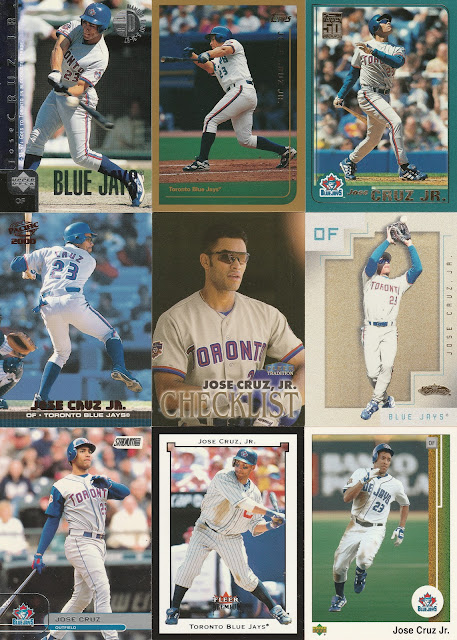 The best years of Jose's career came north of the border with the Blue Jays. The Jays used Cruz in Left and in Center field, and he excelled in the field and at the plate. The switch hitting outfielder had his most well-rounded season with Toronto in 2001, when he became just the 2nd Blue Jay to join the 30/30 club. It was his 2nd straight 30 homer season. His Power/Speed number was best in the AL. His dad's career high was 17 homers, showing that the kid was more than just a chip off the old block. He would become a free agent following the 2002 season. 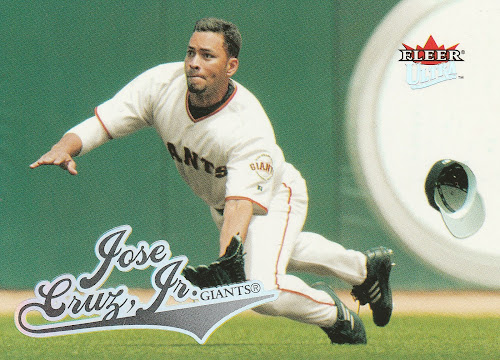 He spent one year as a member of the San Francisco Giants, winning a Gold Glove in Right Field, and had a career high 102 walks (Maybe Barry taught him a thing or two about plate discipline?). He would get his only taste of post season play with the Giants, going hitless in the NLDS against the eventual 2003 World Series Champs, the Marlins. 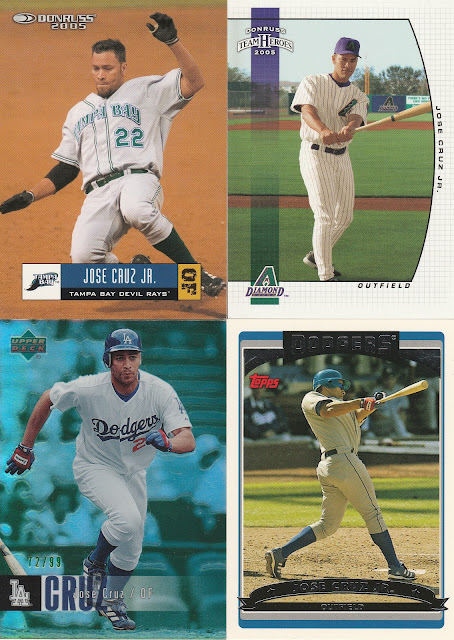 The tail end of Cruz's career involved several teams - three of which he played for in 2005. He went from the DBacks to the BoSox to the Dodgers in that same season. He provided some great at bats down the stretch for the Dodgers, hitting .301/.391/.532 in 47 games. Unfortunately, the team was already out of the race, finishing 20 games below .500. He would play a few more seasons, including a final 38 game stretch in 2008 for his dad's former team, the Houston Astros.
Cruz finished his career with 1,167 hits, 204 Homers, and over 700 runs scored. In his Gold Glove season, Cruz led the NL in Total Zone Runs, putouts,  Double Plays turned and Range Factor. He ranked 2nd in fielding pct and outfield Assists. The Cruz Family legacy included his uncles, his father, his brothers, and now his son Trei, whom the Tigers drafted in the 3rd round of the 2020 MLB draft.
Do you have any Jose Cruz, Jr. stories? I'd love to read them in the comments below.
Thanks for reading!
Posted by Brian at 5:50 PM