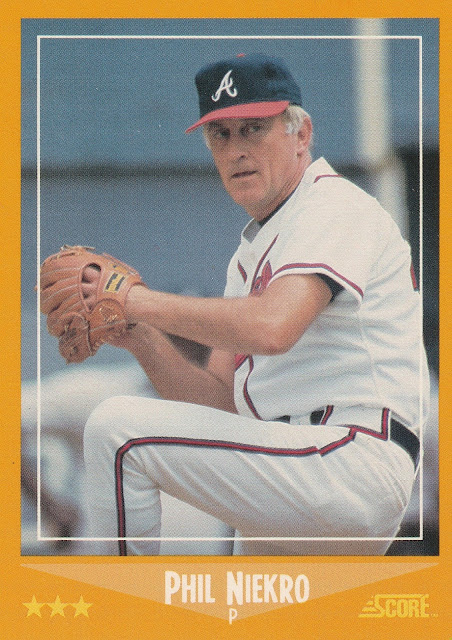 Happy Birthday to Philip Henry Niekro, 81 years young today. Since he's in his 80s, I thought I would take some time to appreciate his work in the 1980s, his 3rd decade in the Major Leagues, where he would reach some important milestones and accolades. 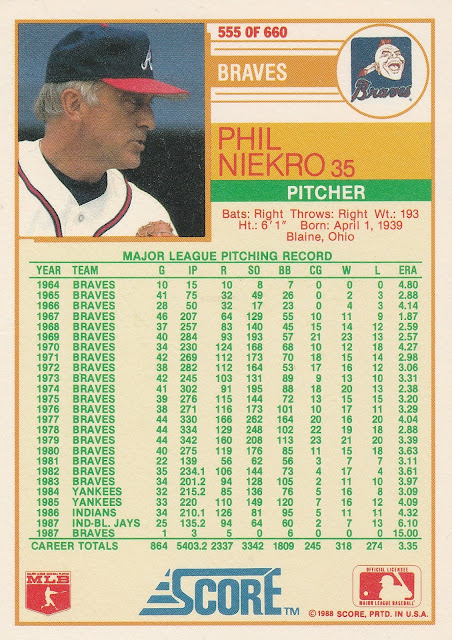 Score released the only Phil Niekro card of 1988 to show his full career stats. Score instantly gained a reputation for their card backs, not only because of its full color photo (which Upper Deck would make mainstream the following year), but the clever and informative text below the career totals. In the case of Niekro, the career was left to speak for itself, and it had plenty to say! 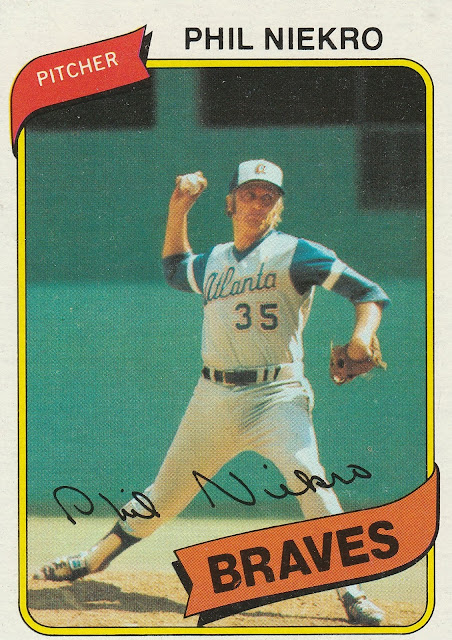 In 1980, Niekro had already pitched with Atlanta for 16 seasons, winning 218 games and appearing in a total of 608. Despite leading the NL in losses, this could still be considered a "good" Phil Niekro season. He earned a Gold Glove for his defense, and gave his team 38 starts and a pair of relief appearances. 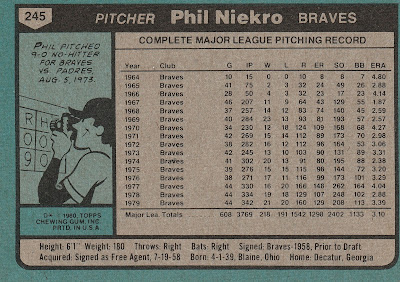 Niekro was the winner of the Roberto Clemente award in 1980 as well, becoming the first pitcher to win the honor, given to a player who exemplifies sportsmanship and community involvement. In his case, it was in recognition his work with the Atlanta ALS (Lou Gehrig's Disease) Foundation. 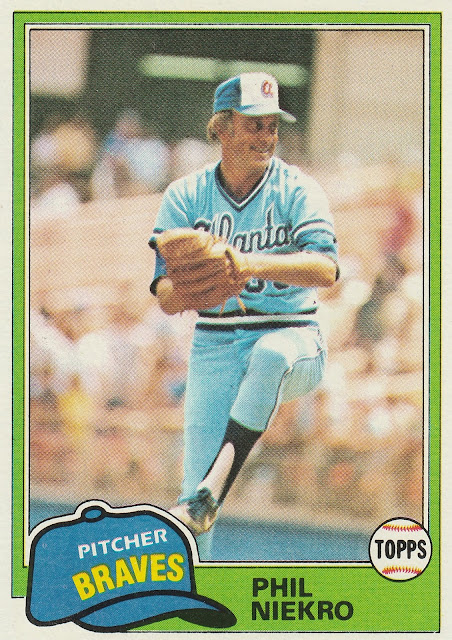 In 1981, the league endured a player's strike that split the season into two halves. Niekro appeared in just 22 games, the lowest total since his rookie year of 1964. After allowing the most homers in the league in 1980, he found some kind of magic with his knuckler to drop his HR rate to just .4 HR/9 innings. He allowed just 6 long balls over his 139 innings pitched. 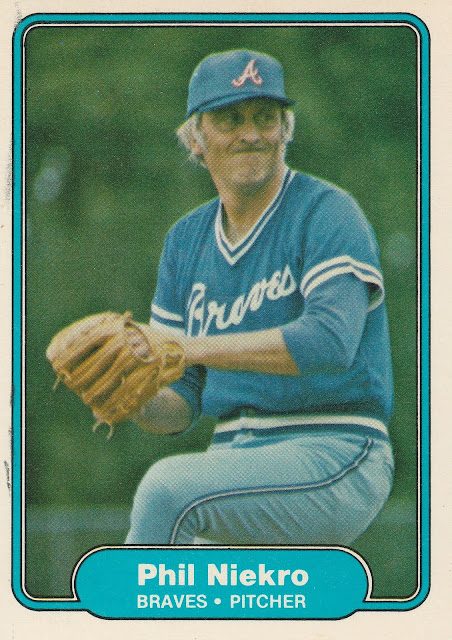 At first glance, 1982 may have been Niekro's best season of the 80s. He won 17 games for the Braves in the midst of a pennant race, made the All-Star team, and won his 4th Gold Glove award. The Cy Young voting of course loved his league leading .810 winning percentage for a contending team. He did have the lowest walk rate of his 80s seasons, issuing just 2.8 free passes per 9 innings. He would once again vault above 200 innings pitched, and started 35 games for Atlanta, despite missing the first two weeks of the season with a rib injury. 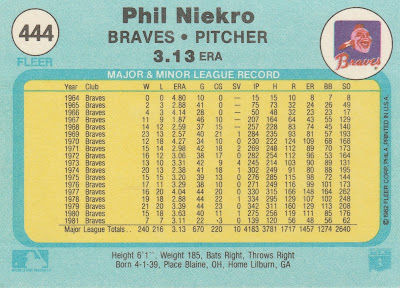 1983 was a season of challenges and disappointments for Phil, his final full season in Atlanta. He had another solid season in terms of durability, however his walk rate spiked, leading to an ERA+ of 98, the first time his season rate fell below league average since 1966, the year before he became a full-time starter. The team had moved on from Manager Bobby Cox to hire Joe Torre. Niekro had been on record as early as 1977 as being interested in the manager position, likely as a Player/manager to start. Instead, the season would conclude with a much less encouraging exchange with the front office, with Atlanta's top brass suggesting that Niekro hang up his spikes. Niekro likened the falling out to a divorce, pointing out that with the exception of his wife and children, everything he had was bought and paid for with Braves paychecks. Team Owner Ted Turner, a long time fan of Niekro tried to extend an olive branch with a roster spot, but Niekro had made up his mind to move on. 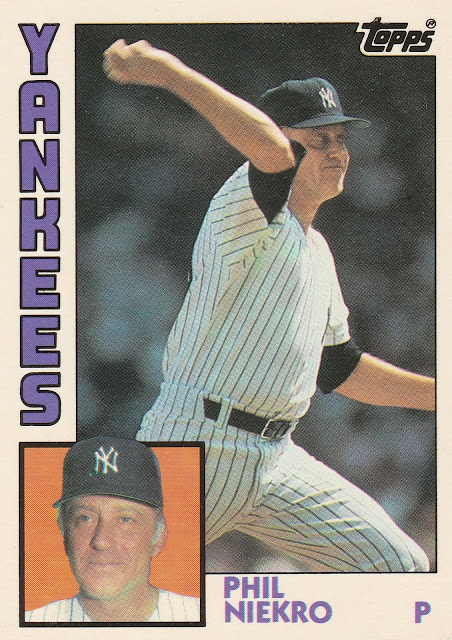 Now in a new uniform for the first time since the Braves moved from Milwaukee to Atlanta, Niekro would take his talents to the Big Apple and would try his luck tossing knuckleballs for George Steinbrenner. He would arguably have the best season of the decade in his first season with the Yankees. He posted the lowest ERA and highest ERA+ despite switching to a league that had a DH and learning how to retire a new crop of hitters. He reached 3,000 career strikeouts in July, and was named to his 5th and final All-Star squad. This was thanks to his fast start to the season, going 11-4 with a 1.19 ERA leading up to the break, including a 4-0 April. 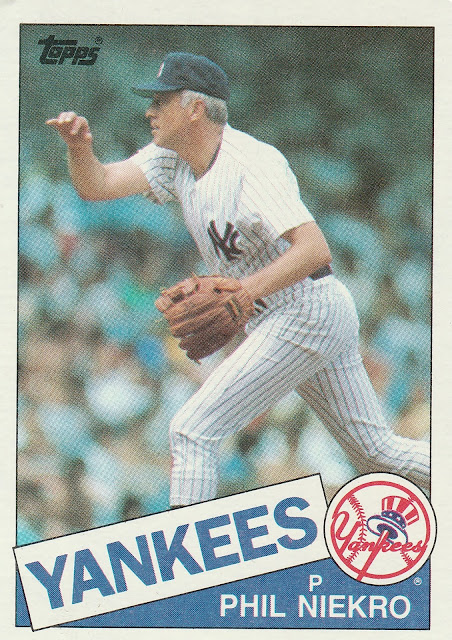 Niekro once again topped 200 innings pitched for the Yankees, and had a personal high-water mark for Strikeout rate in the 1980s, exceeding 6 Ks/9. Perhaps the most impressive start as a Yankee was his last. Coming into the season, Niekro needed 16 victories to reach 300 for his career. He had 15 with about a month to go in the season. A late trade reunited Phil with his brother Joe, who were gaining on the Perry brothers in a heated sibling rivalry for the most combined career wins by brothers. Coming into his final start of the year and sitting on 299 victories, he and his brother were more concerned for the health of their father, who was staying in a hospital in Wheeling, West Virginia. Niekro Sr was a Coal Miner, and had taught the signature knuckler to both Niekro brothers as children. Steinbrenner had arranged for the game to be broadcast by phone to the hospital, and Niekro's father was able to listen in as his son became the oldest 300 game winner, and oldest to throw a 9 inning shutout. His brother Joe was the first to greet Phil on the mound, who had eschewed the knuckleball for the majority of the start, to let Phil know that his dad had been listening in. Phil was able to present his dad with the game ball the next day. 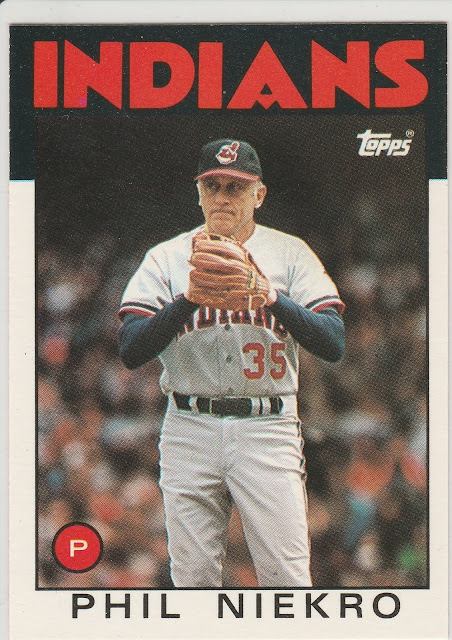 Now at age 47, Niekro was released by the Yankees after Spring Training, but quickly snapped up by Cleveland. Niekro was happy to continue to chase down the Perrys with his brother Joe, who was still in pinstripes. They would combine for 20 wins in 1986, still 4 wins shy of the record. Phil had another season just below league average with a 98 ERA+, but finished with over 200 innings for the 19th time in his career. 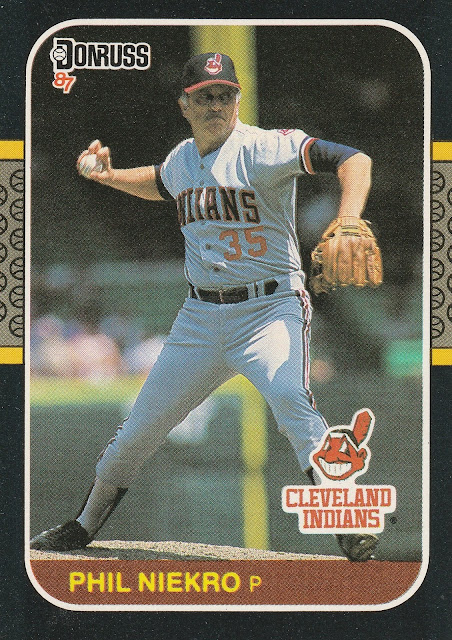 Niekro's final season in the majors was a mixed blessing. In June, Niekro defeated Detroit to earn the 530 career victory for the Niekro family, passing Jim and Gaylord Perry for the most all-time. With the team out of the playoff race and holding several aging veterans, Cleveland would trade away Niekro for a pair of young players to the surging Toronto Blue Jays. Niekro was excited for what might be his final chance to play in a World Series. Unfortunately, his 3 starts with the Blue Jays resulted in 2 losses. His final start in Toronto ended in the first inning, after which he would be released. Niekro only had one goal left in mind - to finish his career with his original team. The final home game of the season would set the stage for Niekro to make one more appearance with the Braves. He signed a contract for $1, and made the start with a starting lineup that included Jeff Blauser at Short Stop, who was -2 years old when Niekro pitched his first game. That game, also against the Giants, featured Hank Aaron, Eddie Mathews, Felipe Alou, Rico Carty for the Braves - Willie Mays, Willie McCovey, Matty Alou for the Giants. His only batter faced in that contest was Jim Davenport, against whom he induced a ground ball out. In his final game, Niekro was crusing through the first three innings until he ran into trouble in the fourth. Braves skipper Chuck Tanner pulled Niekro while the team was still leading, wanting to keep Niekro from being the pitcher of record in a loss. Chuck Cary came in to relieve Niekro with the bases loaded and promptly gave up a Grand Slam. Niekro was on the hook for 5 of the 6 runs allowed in the inning. 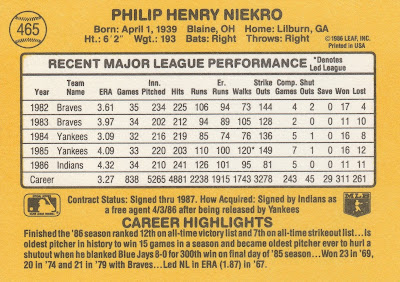 Niekro being born on April Fool's Day feels fitting for a pitcher who was the master of fooling hitters with his signature pitch. Cleveland teammate Tom Candiotti also threw the inscrutable pitch, and said that talking about knuckleballs with "Knucksie" was like talking about lightbulbs with Thomas Edison.