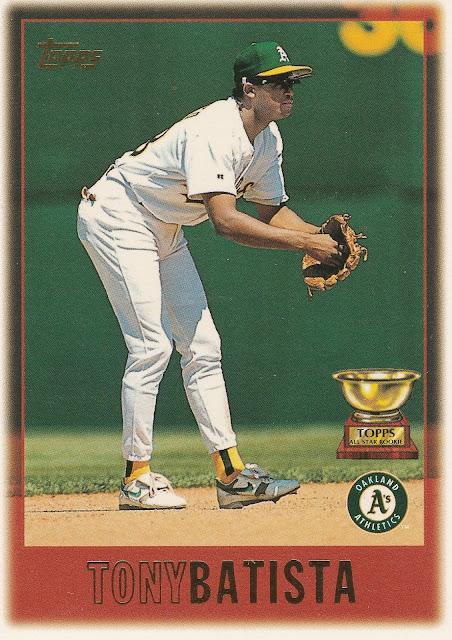 To make the Topps All-Star Rookie roster, you don't need to play in every game, you just need to shine at the right time. For Tony Batista, it was a torrid second half that made him the perfect choice for the 1996 Topps All-Star Rookie Second Baseman. He played in just 74 games for the A's in 1996, but they came late in the season. He became the team's regular starting second sacker in July, hitting .298 with 6 homers and 25 RBI. 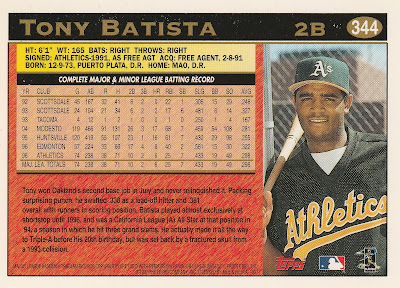 Batista was signed by Oakland as a minor league free agent out of the Dominican Republic in 1991, when he was just 17 years old. After playing in the Dominican Winter League, Batista made his way the United States and was ready to take on new challenges in Single A. His career was nearly ended early in his minor league days, when he suffered a fractured skull following a collision in the outfield. Upon his return to the lineup, Batista began to show the early signs of the power hitter he would become. in 1994, Batista was making big gains in High A Modesto. He would hit 17 homers and 26 doubles for the club. He would hit 18 more in AA the following season, and his power up the middle was enough to earn him a call to the big leagues. The A's had been relying upon Brent Gates and Rafael Bournigal at second, so a little offense would go a long way. 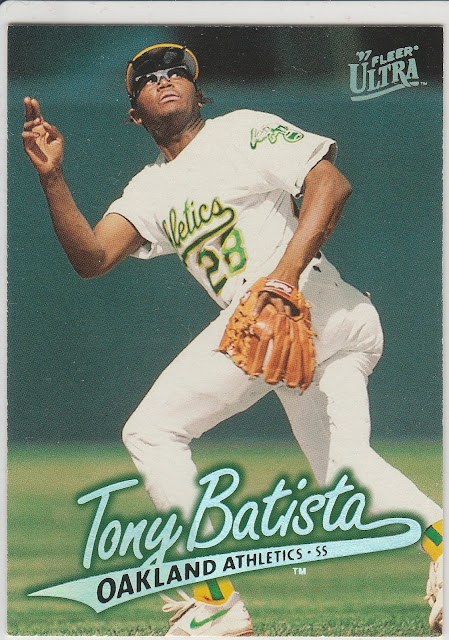 Unfortunately for Batista, the league figured out how to pitch to him. Batista would struggle early on in his sophomore season, hitting under .200 early on, which led to a demotion back to AAA. Still just 23 years old. Batista still had plenty of work to do and plenty to prove. 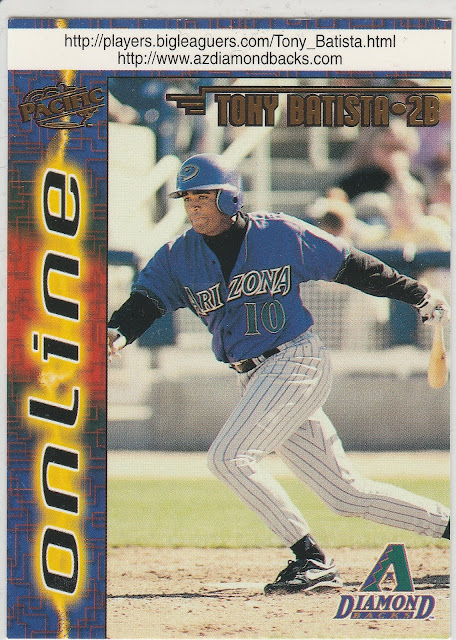 The Expansion Arizona Diamondbacks selected Batista with the 27th pick of the expansion draft, and he would expect to see regular playing time for Arizona in their inaugural season. It was over the offseason that year that Batista developed his unorthodox batting stance, which involved standing parallel to the pitcher's mound and facing the pitcher head on. He did fare well in his time in the desert, clubbing 5 homers in 44 games, but he would be traded to Toronto in exchange for pitching, the one thing that expansion teams can never get enough of. 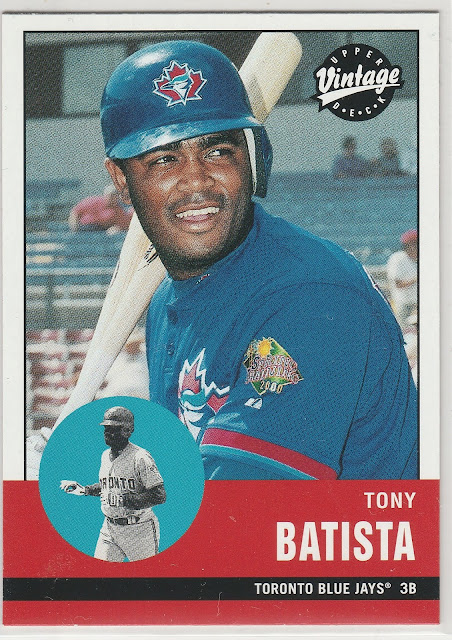 Batista would have his best individual season of his career with Toronto in 2000. He had already hit 26 homers following his trade to the Jays in 1999, but he would tear the cover off the ball in 2000, hitting 41 homers (4th best in the AL) . He had career highs in Runs Scored, hits, doubles, homers, RBI and total bases. he was also named to his first All-Star game. By June of 2001, Batista had Team records for homers by a SS and homers by a 3B in a season. He was a fan favorite in Toronto, despite being a fairly one dimensional all or nothing hitter. 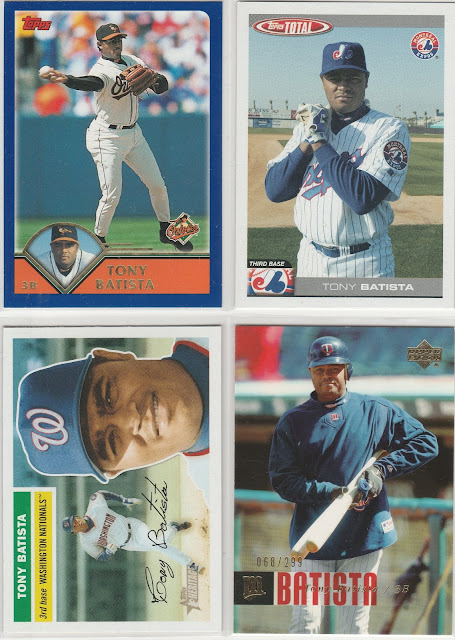 Inexplicably, the Blue Jays placed Batista on waivers. This may have been an attempt to send Batista to the minors to improve his batting average, but the plan backfired as he was promptly claimed by the Baltimore Orioles. Cal Ripken was playing in his final MLB season, and Batista provided a capable reserve. He would also see a fair amount of time as a DH and as the team's shortstop. The first game of 2002, with Ripken now retired, featured Batista as the team's primary 3rd baseman. He crushed a Grand Slam, the first time the O's had an Opening Day Grand Slam since another Baltimore legend, Eddie Murray, hit one in 1986. Here's a fun article on him from Baltimore, which includes his hitting drill of hitting popcorn kernels

He would sign with the Montreal Expos in their final season, and was one of the team's few bright spots. He was ostensibly replacing Vlad Guerrero's bat in the lineup, and he filled in admirably in terms of power numbers, but they couldn't expect him to fill Vladdy's shoes. He had 32 homers and 110 RBI over 157 games with the Expos.

While Batista was hitting for power, he never in his career hit for average, and was not one to take a walk. So it was not surprising that he was unable to find a taker following the 2004 season, and ended up playing for a season in Japan with the SoftBank Hawks.

The Minnesota Twins took a flier on him in 2006, but 50 games later, they were ready to move on. He would return to Expos franchise again in 2007, and served as a pinch hitter and bench player for the Nationals.


Disappointingly, none of the cards I have of Batista in the batter's box. Thankfully YouTube has my back - check out this clip of Batista at the plate while he was playing for the Blue Jays, diving away from a brushback, then responding with a homer on the next pitch.