The 1982 Minnesota Twins broke records. The only problem? They were records for most losses in Franchise history since moving to MN. They had the lowest attendance in the American League, drawing fewer than 1 Million fans, despite opening a new facility (to call the Metrodome a "ballpark" is an insult to ballparks). The 82 team finished with the worst record in baseball with just 60 wins against 102 losses. 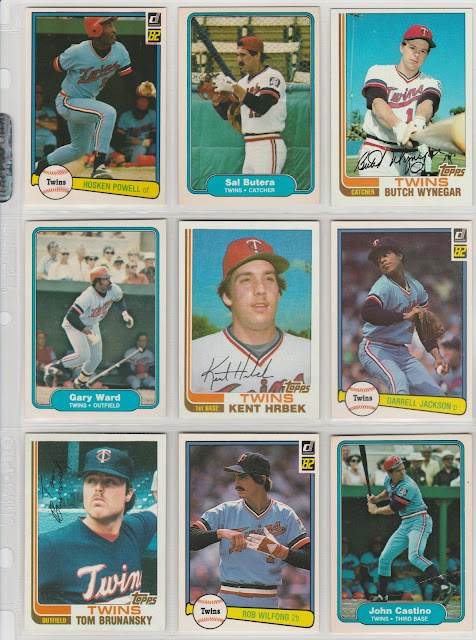 Despite the terrible win-loss record and sagging attendance, hindsight would prove that the 1982 season was the spark that started the team's two championship runs in '87 and '91. It would be the first full seasons for catcher Tim Laudner, third baseman Gary Gaetti, as well as the first year in a Twins uniform for Tom Brunansky and a breakout season for Kent Hrbek. In January, the team drafted a Junior College outfielder by the name of Kirby Puckett.

1982 was exactly the kind of season one would expect to see from a team in the midst of a rebuild. 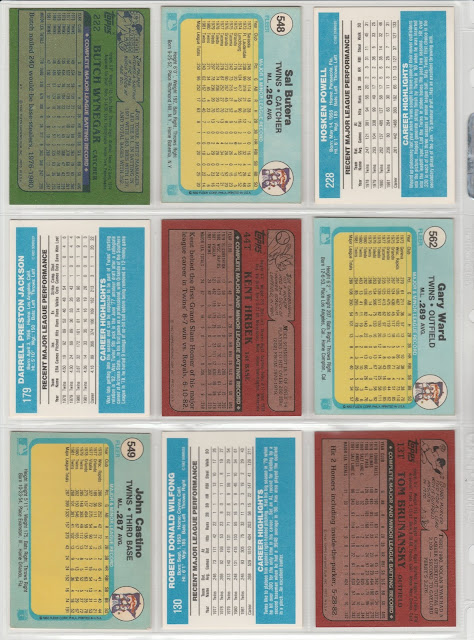 The Cards:Donruss #228 Hosken Powell - Powell was the Twins' first round pick (3rd Overall) in 1975, and was named to the 1978 Topps All-Star Rookie team. He would have his best season for the Twins in 1980, playing in a career high 137 games and stealing 14 bases. Powell would spend 1982 with the Toronto Blue Jays, and played one season in Mexico in 1985.

Fleer #548 Sal Butera - One of the few highlights for the Twins in 1982 came in May. Butera set a team record by throwing out 4 base stealers in a single game. Later that same month, he would start a triple play. Former Twin Roy Smalley struck out, then Butera threw to Gaetti at 3rd base, who ran the lead runner back to second, where Graig Nettles was already standing. Nettles retreated to first, and Gaetti rifled the ball to Hrbek. Then the lead runner Bobby Murcer again tried to take 3rd base, but Hrbek fired back across the diamond, beating Murcer's slide. It was a fairly eventful season for the team's backup catcher, as Butera would appear in just 54 games for the Twins. His son Drew would also become a journeyman backup backstop, currently on the Rockies roster for a 3rd straight season.

Topps #222 Butch Wynegar - Wynegar was one of the Twins' better players in the late 70s and had been developing into a very good hitting catcher. This made him a very appealing trade chip for the Twins, and he would go to the Yankees with Roger Erickson for a trio of prospects and cash. The switch hitting Wynegar was a two time all-star in MN, making the squad as a 20 and 21 year old. After leading the league in stolen bases allowed in his rookie season, he would turn the tables and lead the AL in caught stealing the next two years. Injuries would limit his effectiveness in New York, though he did post a career high 3.6 WAR and 133 OPS+ in 1983.

Fleer #562 Gary Ward - In just his 14th major league game, Gary Ward hit for the cycle, the earliest cycle for any player in MLB history. His son Daryle would also hit for the cycle, making them the first father-son duo to both achieve the feat. Ward the elder had a breakout season in 1982, hitting a career high 28 homers and even garnered an MVP vote. He would make his first All-Star team in 1983, and was promptly traded away by the Twins in the offseason to Texas. He would make another All-Star squad in 1985 when he would steal a career high 26 bases. Ward has been a hitting coach in the White Sox organization since 1999.

Topps Traded #44T Kent Hrbek - Born in Bloomington, MN, Hrbek was a hometown hero. He grew up playing baseball on tiny fields in the shadow of Metropolitan Stadium, and was a 17th round pick by the Twins in 1978. Hrbek would finish second in the 1982 AL ROY voting, hitting 26 homers and driving in 92 runs. He was named to his first All-Star Squad. In 1984 he was the runner up for AL MVP, after a season in which the Twins would shake off the early 80s losing in favor of a fierce battle for the AL West division crown. Hrbek retired as the All-Time MLB leader for indoor homers, and as a 2-time World Series Champ. Hrbek has had many roles following his playing career, as a goodwill ambassador for the Twins, and as an avid hunter and fisherman even hosted his own outdoor TV show.

Donruss #179 Darrell Jackson - Jackson's first professional game after being drafted was a gem. He tossed 9 no hit innings in AA Orlando, and was called up to pitch for the major league team before the end of his first pro season. Jackson won 20 MLB games, all with the Twins. He scuffled a bit in 1982, going 0-5 with a 6.25 ERA pitching through shoulder issues. He was recently featured on a podcast talking about his time in High School with Ozzie Smith and Eddie Murray, his 1977 College World Series championship with Arizona State, and his work post playing career with a youth outreach program in Los Angeles.

Topps Traded #13T Tom Brunansky - In 1982, Brunansky set a career high with a 129 OPS+, hitting 20 homers and 30 doubles. An All-Star in 1985, Brunansky had over 1,500 career hits and scored 804 runs. Against the Tigers in the 1987 ALCS, he hit .412 with a pair of homers. "Bruno" was a big part of the Twins offense in the early to mid 80s, and the trade sending him to Saint Louis for Tommy Herr remains one of the least popular moves in Minnesota sports history (2nd place, of course, to the North Stars moving to Dallas).

Donruss #130 Rob Wilfong - To acquire the aforementioned Brunansky, the Twins had to part with Rob Wilfong, who had been the team's starting 2nd baseman since 1978. Wilfong had a great season in 1979, leading the AL in range factor as a 2nd baseman, as well as sacrifice hits. The Twins had called up Gary Gaetti to play 3rd base, and moved John Castino to 2nd base, making Wilfong the odd man out. Wilfong would have success in California as well, playing in the 1986 ALCS and hitting .308 over 4 games. Wilfong was known as defensive whiz, leading the AL in fielding pct in 1980, and also was a regular on the Total Zone Runs leaderboard.