In 1980, The Orioles finished in 2nd place in the AL East though they did win 100 games. The following season they would once again play runner-up to the Yankees, with a 2nd place first half. They faded a bit in the second half of the season following the strike, with a 28-23 record which was 4th best in the division. 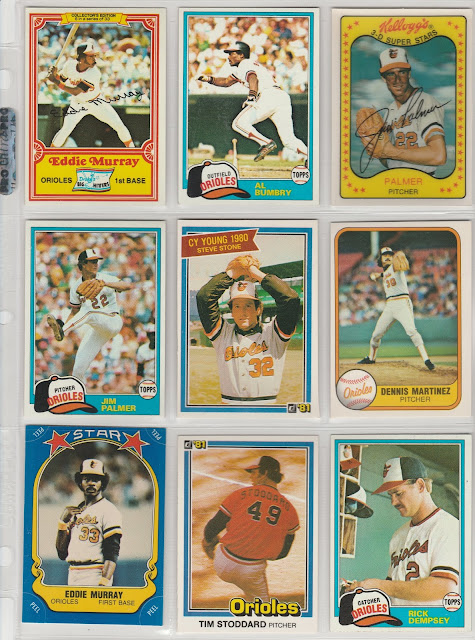 The Orioles had a legacy dating back to the mid 60s as a top AL East Contender. Staff Ace Jim Palmer was a direct line from those 60s teams, having debuted for Baltimore in 1965. Mark Belanger was along for the ride as well, the team's everyday shortstop since 1968. More recently, Al Bumbry and Eddie Murray joined the team in the 1970s. Murray would be a foundational cornerstone for the new dynasty that was just getting started in the 1980s. 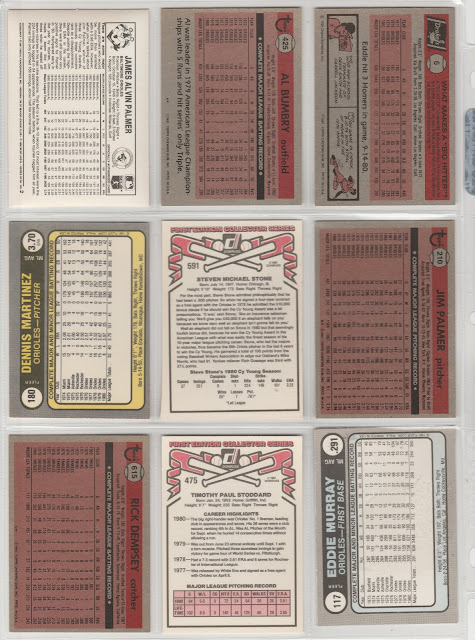 Kellogg's 3-D Superstars #2 Jim Palmer - Palmer was nearing the end of his illustrious career in 1980, but still a very effective lefty righty starter. He was technically not the team's best starting pitcher that year, but the wealth of experience he brought to the starting staff was invaluable. He sported a 16-10 record with a 3.98 ERA. 1981 was a bit of a lost season, but he would bounce back in 1982, leading the AL in WHIP and winning percentage with a 15-5 record.

Topps #210 Jim Palmer - The lefty righty with the golden arm was a 3 time Cy Young award winner, 3 time World Series champ, and 4 time Gold Glove winner. He won 20+ games in 8 seasons, and was elected to the Hall Of Fame in 1990, his first year of eligibility. He nearly became the first active player enshrined in Cooperstown when he attempted a comeback in 1991, but he wasn't named to the final roster and ultimately stayed retired.

Donruss #591 Steve Stone - The team's ace in 1980 was Steve Stone. He won 25 games for the Orioles that season, no O's pitcher has matched it since then. Stone was part of the trade that sent Ron Santo to the South Side. The heavy workload in 1980 (250 innings pitched) took its toll on Stone's arm. 1981 would be his final season, though he would go on to a second career alongside play by play announcer Harry Caray with WGN.

Fleer #180 Dennis Martinez - El Presidente was used both in the starting rotation and in relief for the Orioles in 1980, starting 12 games and appearing in 13 more out of the bullpen. The role was somewhat surprising given that he led the AL in complete games and innings pitched in 1979, and would lead the league in victories in 1981. Martinez was the first person from Nicaragua to play major league baseball, and his 245 MLB victories were the most by a Latin American pitcher at the time of his retirement, surpassed only by Bartolo Colon.

Fleer Star Stickers #117 Eddie Murray - Eddie Murray would hit over 500 career homers and eclipse 3,000 career hits, joining an exclusive club with Willie Mays and Hank Aaron to reach both milestones during his playing days. Murray was never voted as the league's MVP, but he finished 2nd two times and was a top 10 finisher eight times. He is the All-Time MLB leader in intentional walks.

Donruss #475 Tim Stoddard - The team's closer in 1980 with 26 saves, Stoddard appears to have been lost in a sandstorm on Tatooine, never to be seen again. But he would actually appear on major league rosters for another 9 seasons, though his 1980 campaign was probably his best year.

Topps #615 Rick Dempsey - Orioles catcher Dempsey was a world series champion in 1983 and 1988, winning MVP honors for his .385/.467/.923 slash line in the 83 series. A career .233 hitter, Dempsey was best known for his excellent defensive skills behind the plate. He is one of just 29 MLB players (and just 3 catchers) to play in 4 different decades in the major leagues. He is the Orioles' all-time leader in games caught.