My Favorite Padres, Just in Time* for Father's Day 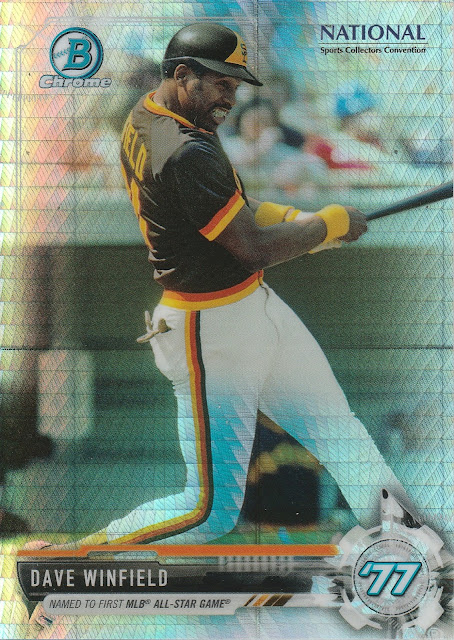 Padres, Father's Day ... are you with me? I have been having a tough time getting the motivation to post. Summer in MN are to be enjoyed outdoors. So even though I have a fair amount of new stuff to post, I haven't been getting down to the basement to scan new stuff. Anyway, here's a bunch of Padres cards, just in time for Father's Day! 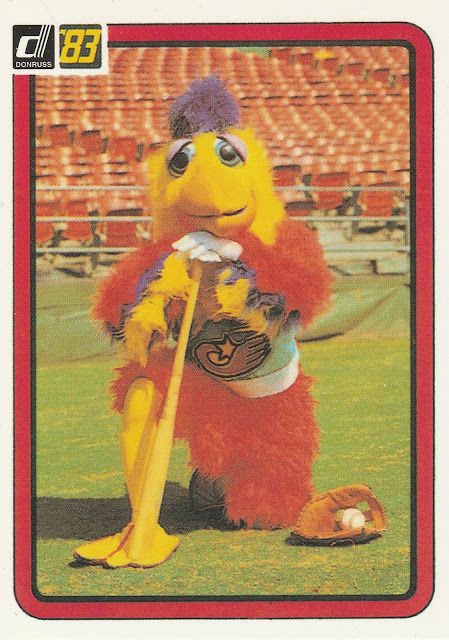 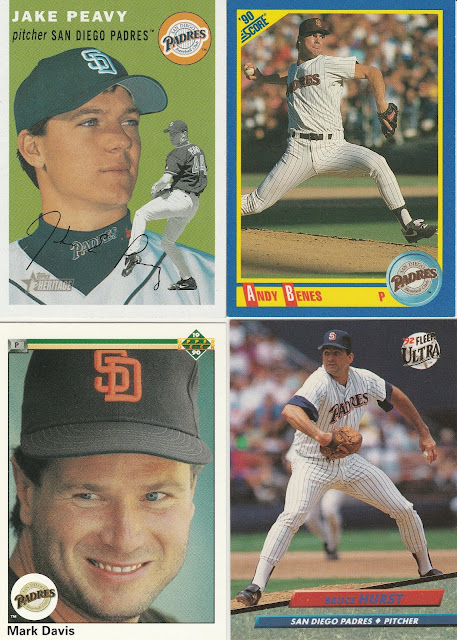 A couple righties and a couple lefties. I wouldn't say that these choices will be the "Best" Padres, rather these are the pitchers that I remember collecting as a kid, or liked watching play as an adult, or because their 1990 Upper Deck reminds me of Aphex Twin. Andy Benes wasn't even with the Padres all that long, but the sweet spot of my collecting as a kid lines up right with his rookie and prospect years. 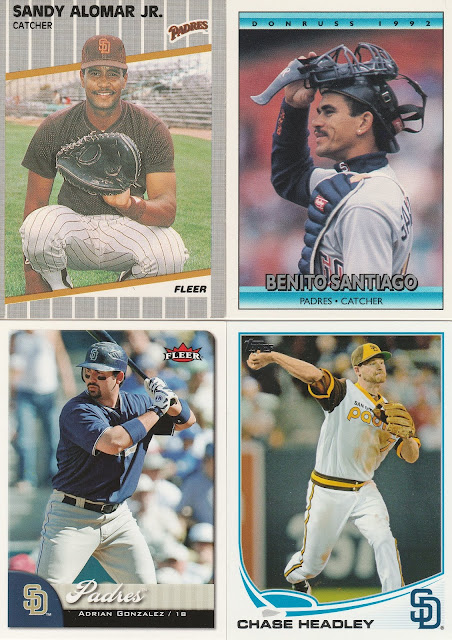 Like Benes, Sandy Alomar Jr didn't stick around San Diego for too long, but her certainly left a card collecting impression. Benito Santiago was one of my favorite players in the early 90s, even though I only saw him in highlights on the weekends (This Week in Baseball, thankyouverymuch). There were plenty of 1B options like Garvey, McGriff, Joyner, Nevin, but I went with Adrian Gonzalez, who I think had his best years in San Diego. Chase Headley was probably the closest to a franchise player the Padres had since Gwynn retired. 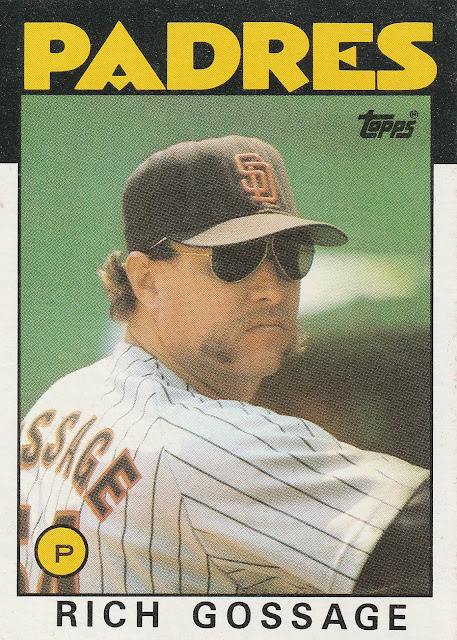 Oh! I need a closer! Of course there's Trevor Hoffman, or Heath Bell, or Craig Kimbrel, Rollie Fingers. . . but when I think Padres closer, I think Goose Gossage. Doesn't have to make sense to be true! He's got a bit of reputation these days as a grumpy goose, but I don't mind that too much. He'll say something awful about younger players and for the most part I just laugh at it. 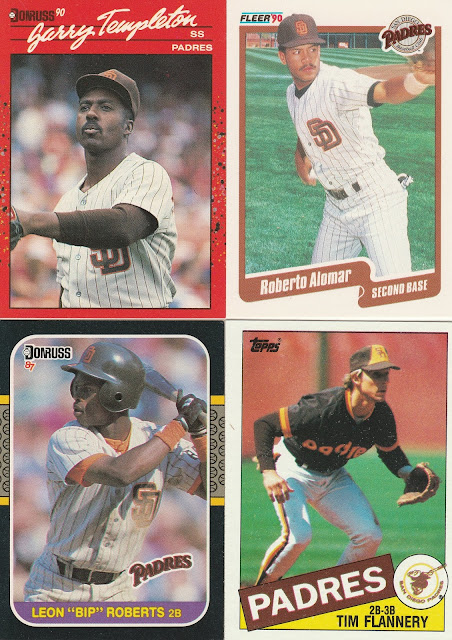 I am too young to remember Ozzie Smith as a Padre, but I definitely recall Garry Templeton. Robbie Alomar had a short stop in San Diego as well, but like his brother, his Padre cards were the ones I remember fondly from my early collecting days. Bip Roberts and Tim Flannery were utility guys that had some good days in the 80s and 90s. 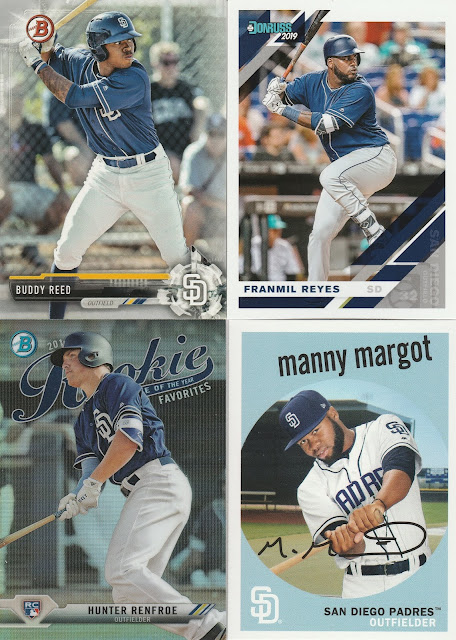 It's not all a nostalgia trip - I have been able to watch a bit more Padres baseball now that I have cable and my parents no longer make me go to bed before the West Coast games get started ( I do what I want, Dad!). These 4 guys are making noise at the big league level or, in Buddy Reed's case, in the minor leagues. I saw the AZ Fall League Championship Game and Buddy had a great moment at the end of the game (even though he was not the hitter or one of the runners). 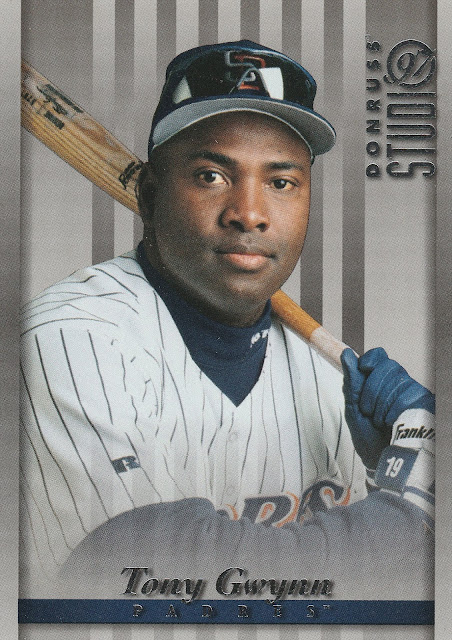 And of course last but not least, my favorite Padre also happens to be the best Padre of all-time. He has 2,000+ more hits than any other player in a San Diego uniform, and has most of the career hitting marks thanks to a Hall of Fame career.