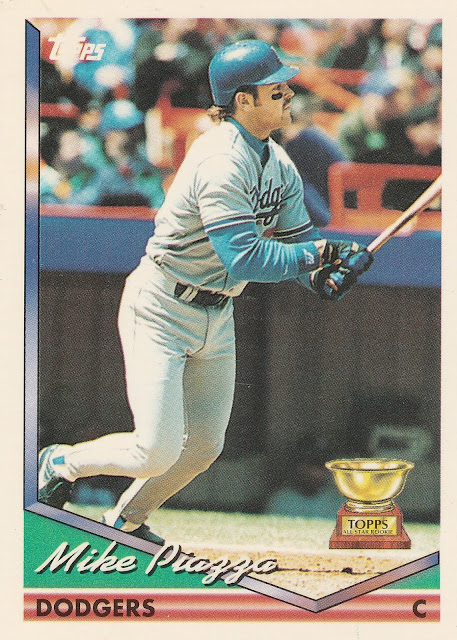 I started profiling the 1993 Topps All-Star Rookie team all the way back in March, and now we come to the end of the line - 1993 NL Rookie of the Year Mike Piazza. The burly catcher is the only member of this roster to make the Hall of Fame, but was famously the last one drafted. 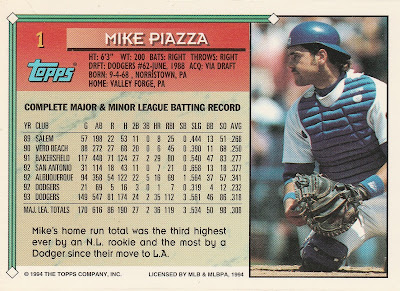 The story goes that Piazza was drafted by the Dodgers as a favor - Mike's dad was a long-time close friend to Dodger legend Tommy Lasorda. The next chapter was all about Piazza struggling to succeed as a first baseman in the minors. Piazza even left his team briefly and if not for the encouragement of family and coaches, would have retired from baseball as a largely unknown player. 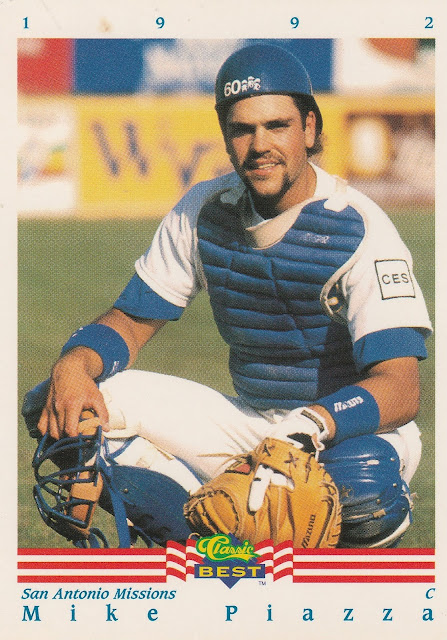 After returning, and after some very hard work to convert to a new position behind the plate, Piazza began to flourish in 1991 with Bakersfield. His 29 homers were a revelation. By the end of 1992, Piazza would climb three more minor league levels and make his MLB debut in a September call-up just a few days shy of his 24th birthday. 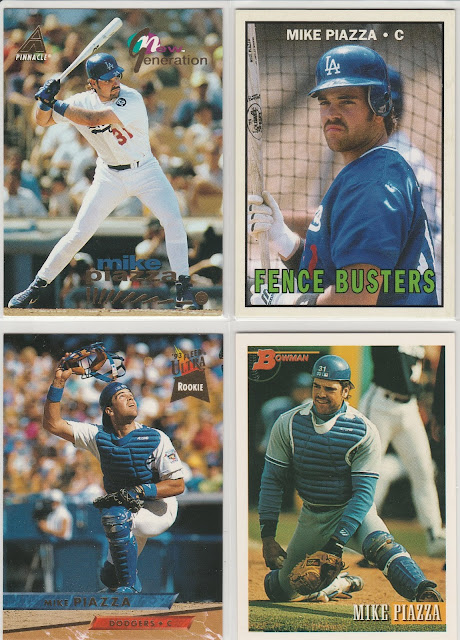 Once he made it to the big leagues, Piazza became a star. His Rookie campaign included an All-Star appearance, a Silver Slugger, a 9th place finish in the MVP race, and of course Rookie of the Year honors. He hit .318 with 35 homers and 112 RBI his rookie season. His 7.0 Wins above replacement was 2nd only to MVP Barry Bonds among position players. 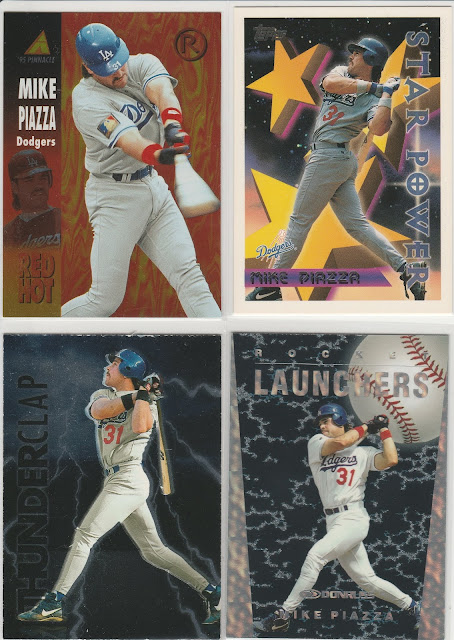 This debut, coupled with the bright lights of Hollywood, made Piazza a frequent subject of insert sets in the crazy card world of the 1990s. The various card companies would work overtime to devise new ways to show Piazza's Prodigious Power. 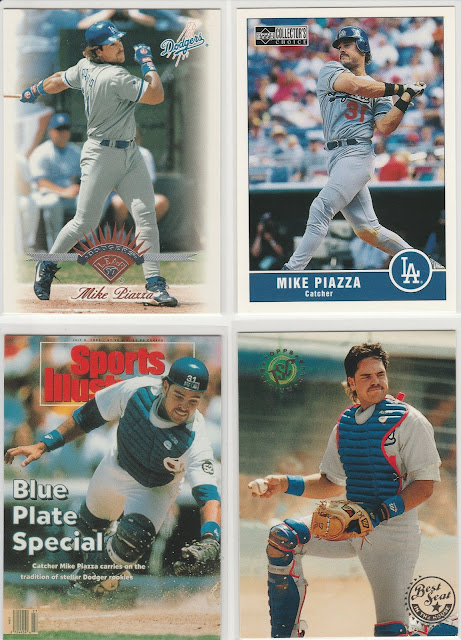 Piazza spent his first 7 seasons with the Dodgers, hitting .331 with 177 homers. Good things don't last forever, and in 1998 the team and Piazza were at an impasse in negotiating a new contract. As often happens, newspapers spilled vast amounts of ink about player loyalty, and questioned Piazza's motives. For his own part, Piazza responded to criticism with scorn of his own- for the writers, for Vin Scully, for the Dodgers. In what could have been a life long, mutually beneficial relationship, the Dodgers and Piazza could not find common ground. Whether you want to blame the player or blame the owners, either way it was an unfortunately end to his time in Los Angeles. 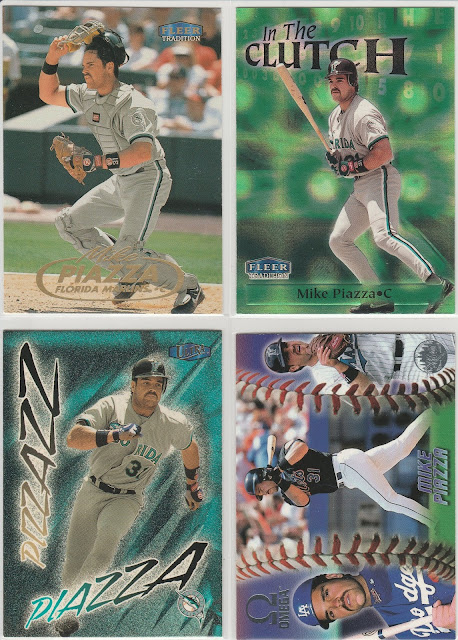 It led Piazza to spend 5 bizarre games with the Florida Marlins. Marlins owner Wayne Huizenga was ready for a firesale, acquiring Piazza (and Todd Zeile) for Gary Sheffield, Charles Johnson, Jim Eisenreich, Bobby Bonilla, and Manuel Barrios. Florida essentially traded all of those guys (and Piazza) to get Preston Wilson and Ed Yarnall from the Mets. Piazza went 5-18 with a triple and 5 RBI for the Marlins before going on the move again. 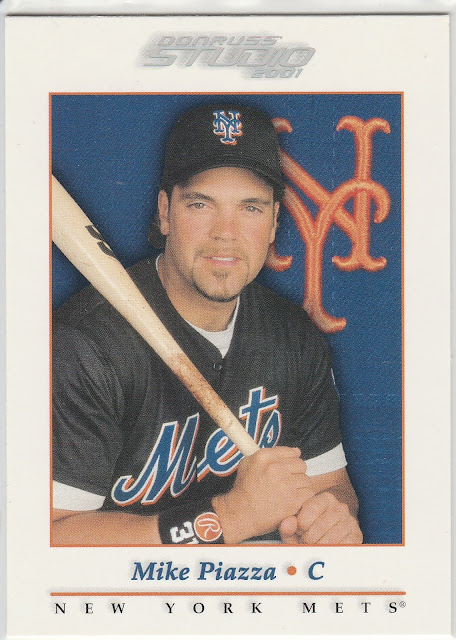 He didn't know it yet, but the Mets would end up being the most significant stop in his post Dodgers career. 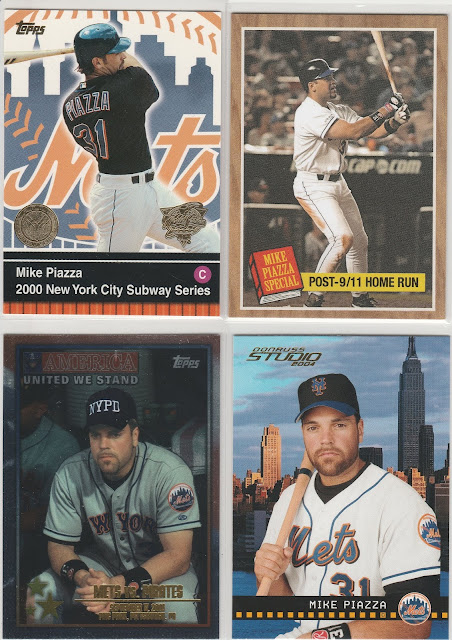 The two things that come to mind most readily about Piazza with the Mets are the 2000 Subway Series, and the Mets' games immediately following the events of 9/11. Piazza had a pair of homers in the Subway series, and his deep fly ball in game 5 was the final out. It would turn out to be the closest the team would get to a championship with Piazza. The next season, the Mets were disappointing but they saved their best work for the end of the season. After 9/11, it was Piazza who punctuated the Mets' return to NYC with a walk off home run. 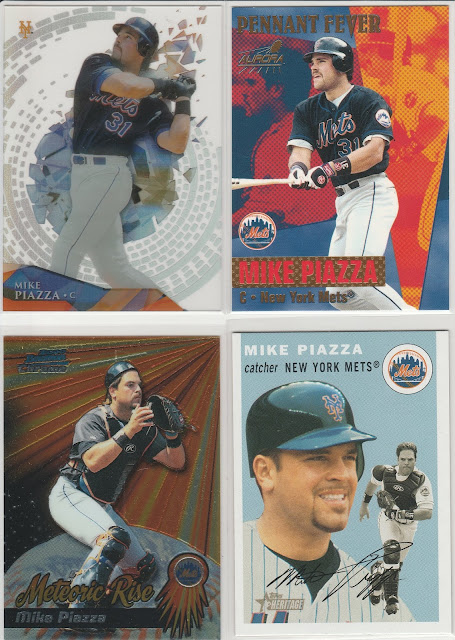 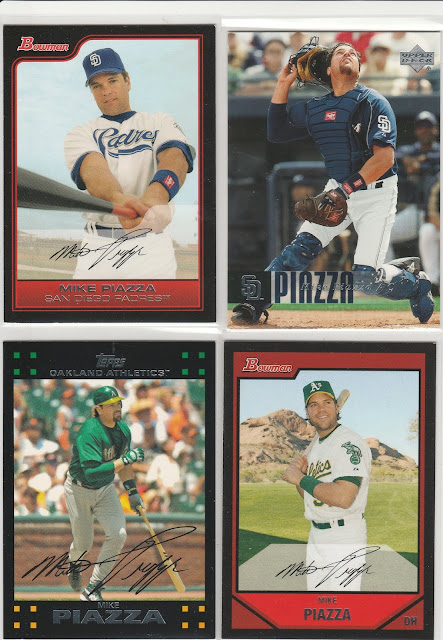 As the wear and tear of catching limited Piazza's playing time and production, he would return to West Coast to finish off his playing career. He'd reach 400 career homers with the Padres, and his final appearance as a catcher. He'd finish his career with 83 games as the A's DH, platooning with lefty Jack Cust.

He is the all-time leader for homers by a catcher, and his 10 Silver Sluggers are also tops for the position. He was inducted into the Hall of Fame in 2016.