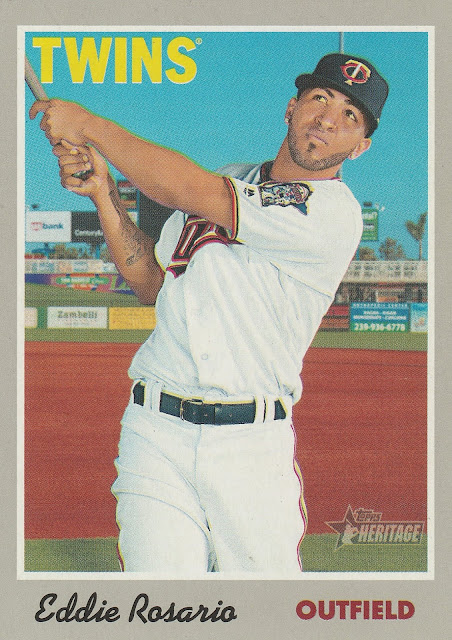 Douglas from Sportscards From The Dollar Store surprised me with a nice stack of cards this month. 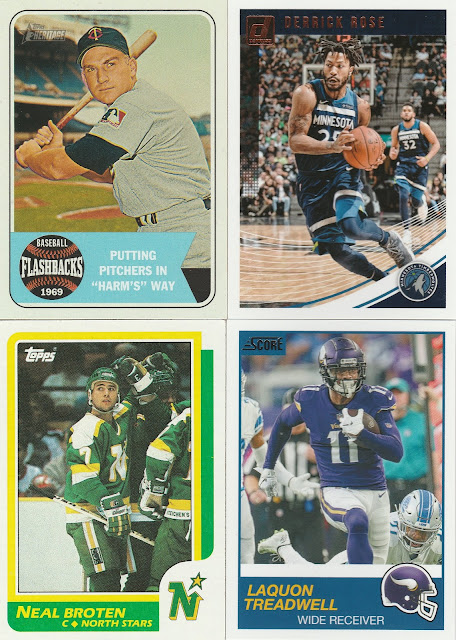 As has been the custom from our trades, the four major North American sports were all represented! 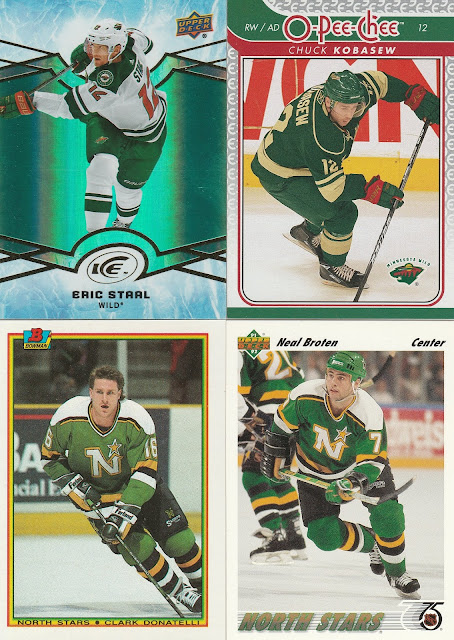 In Hockey, both the expansion Wild and the (much earlier) expansion North Stars were included. 1990 Bowman was so terrible for baseball, but for hockey I don't mind it at all - maybe it's the inclusion of more on-ice action and less portrait shots.

The Wolves will be trying again to make some progress in the talent rich Western Conference, but without Rose and Jimmy Butler. Butler is somewhat of an enigma - he does really endear himself to his new team, but is seemingly quick to spoil a good thing. He's also pretty good at burning bridges, I doubt the Wolves will be trying to orchestrate a reunion. 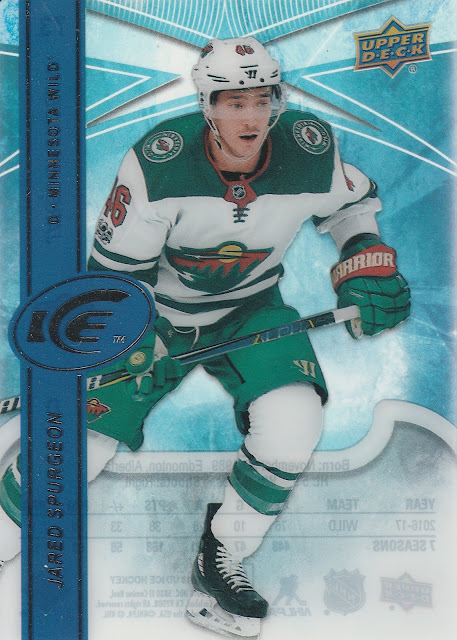 Back to Hockey, I thought this was the coolest one- a clear acetate card reminiscent of a freshly zamboni'd rink. 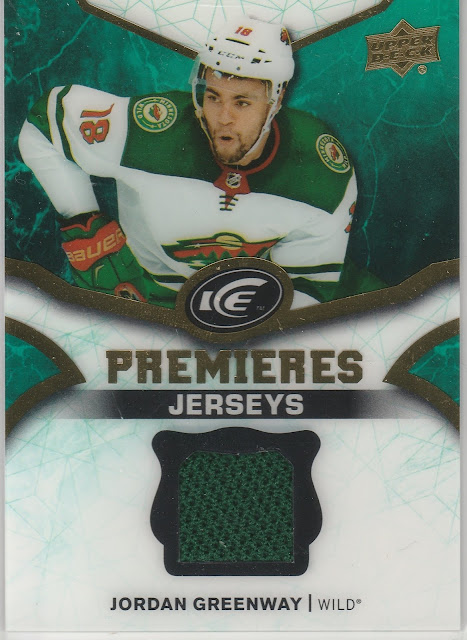 And a hit! Jordan Greenway was a 2nd round pick of the Wild back in 2015 out of Boston University. He played in 81 games last season, scoring a dozen goals and assisting a dozen more. He'll be looking to increase his production this season, as he's in the final year of his rookie contract. He's a big dude, 6'6" to be exact, and the Wild will be counting on him to provide a physical presence in the offensive zone, probably on their 3rd shift. 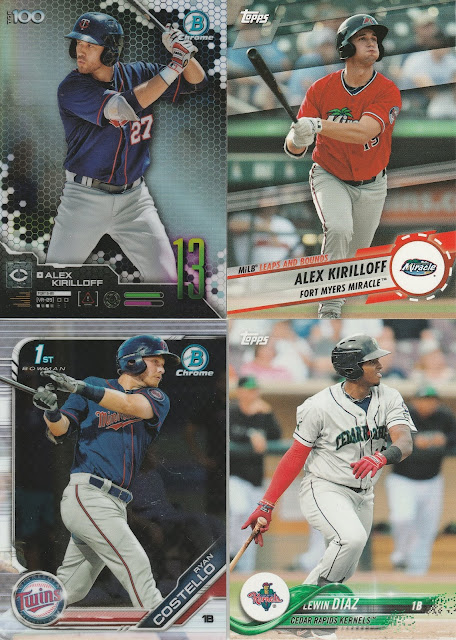 Speaking of talented youngsters, the Twins are well stocked. Alex Kiriloff made Lewin Diaz expendable in yesterday's Sergio Romo trade, despite the fact that Diaz was projected to be MLB ready as soon as 2020. 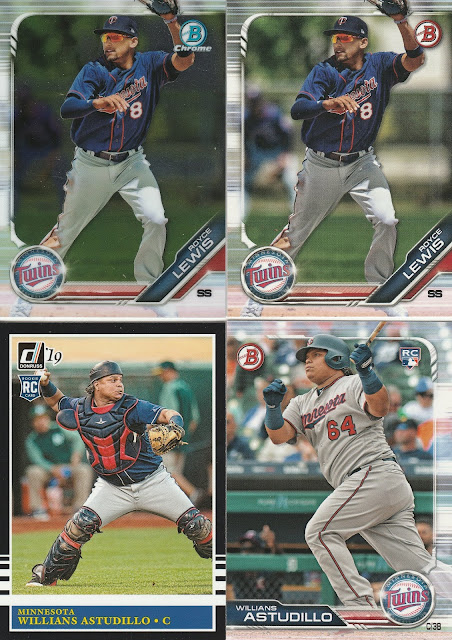 Recent first rounder Royce Lewis was just promoted to AA taking Lewin's roster spot. He will most likely take over at Short, with someone else shifting over to be the everyday 1B. It won't be Willians Astudillo, who remains with the Big League squad, albeit on the IL for the forseeable future. 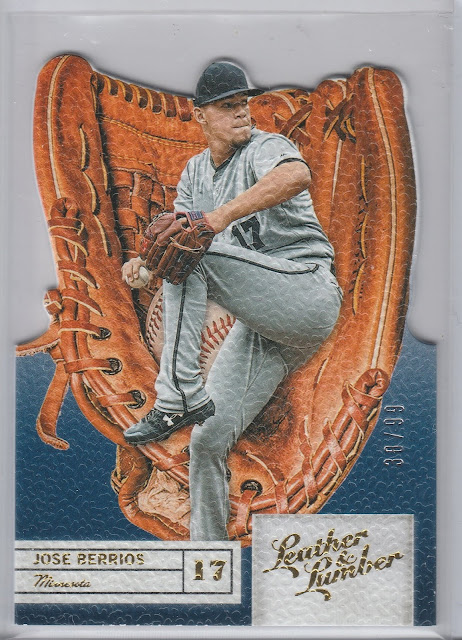 A couple more hits! Jose Berrios is the team Ace, and Twins fans will be hoping for a strong finish to 2019 from the young right hander, who just made his first All-Star squad. 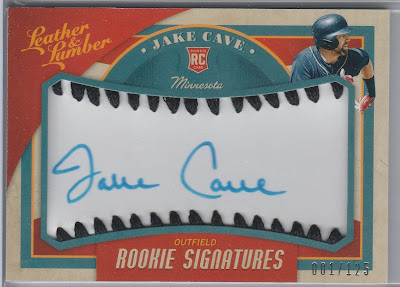 Last but not least is the speedy Jake Cave. He was sent down to AAA this week, as Byron Buxton returned from injury. Given Buxton's history and the grind of the full season on all the outfielders, chances are Cave will get another shot to contribute to the Twins in 2019.

Thanks so much for these, Douglas! I don't have a great package to send you - yet. But I'll have something headed your way as soon as I do!