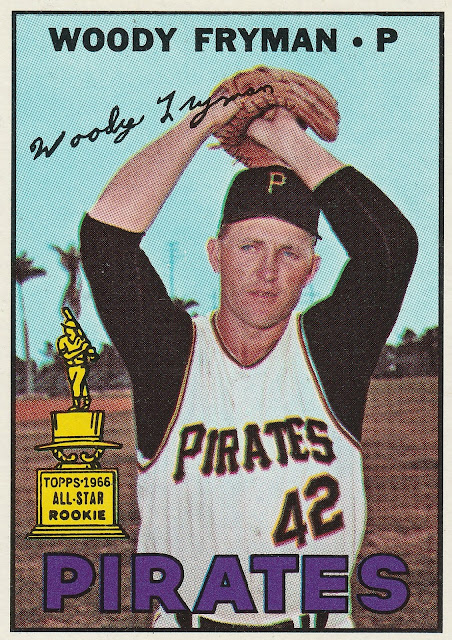 It's Pirates Week at HSCA headquarters! Today, I'm taking a look at Pirates that have been named to the Topps All-Star Rookie squad over the years. First up is lefty Woody / Woodie Fryman. 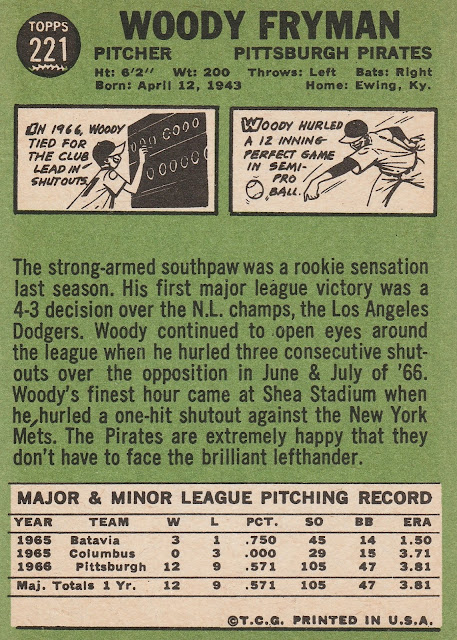 His claim to fame is probably a half season he spent in Detroit. He was picked up off waivers by the Tigers in August of 1972, and he went 10-3 with a 2.06 ERA in 14 starts, propelling the Tigers to the playoffs. Fryman was a hit in Montreal as well, representing the Expos in the All-Star game in 1976. Fryman pitched in 18 seasons in the big leagues, having great success as a middle reliever at the tail end of his playing days. 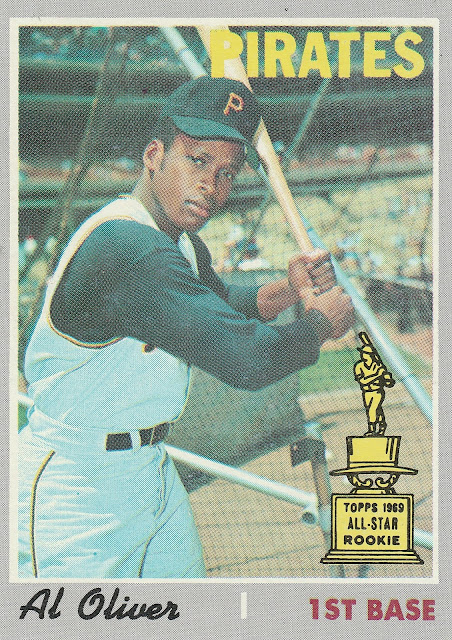 SCOOP! He was 2nd in the Rookie of the Year voting in 1969, losing out to Dodgers' infielder Ted Sizemore. For his career, Oliver was a 7 time All-Star,  and played Center Field in the 1971 World Series for the Buccos. He was the NL batting champ in 1982, also leading the league in base hits, doubles, and RBI. 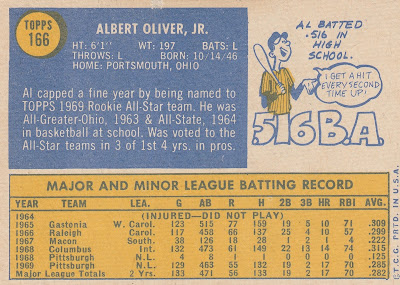 He was a career .303 hitter and finished with over 2700 hits, 525 doubles, 1100 runs scored, and 1300 RBI - He's one of several players from the 70s and 80s that make a compelling case for the Hall of Fame despite receiving little support from the voters. 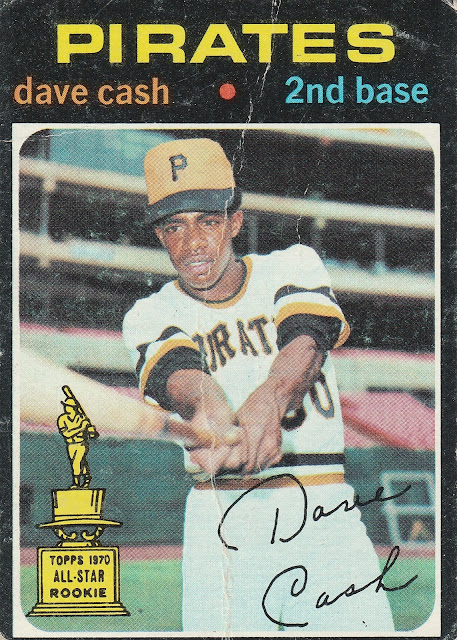 Cash found a home in Philly in the 70s after several years competing for playing time in Pittsburgh against veterans like Bill Mazeroski and young talent like Rennie Stennett. He was the starter at 2nd in the 1971 series for the Pirates, teaming up with Al Oliver to bring home a title. 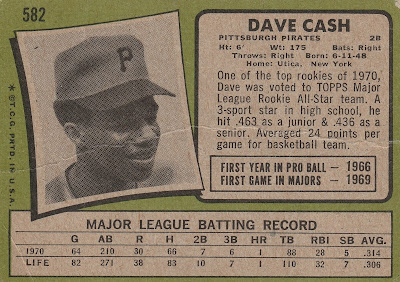 Cash was a 3-sport star in High School, and I believe it because Topps said so. His teammates in Philly gave him the nickname "A.C." because he was "Always Cool." Cash was one of the first big name free agents after the 1976 season, and surprised many by signing with the Montreal Expos. He would go on to play in the Senior League for two seasons, and had three stints as a minor league manager. 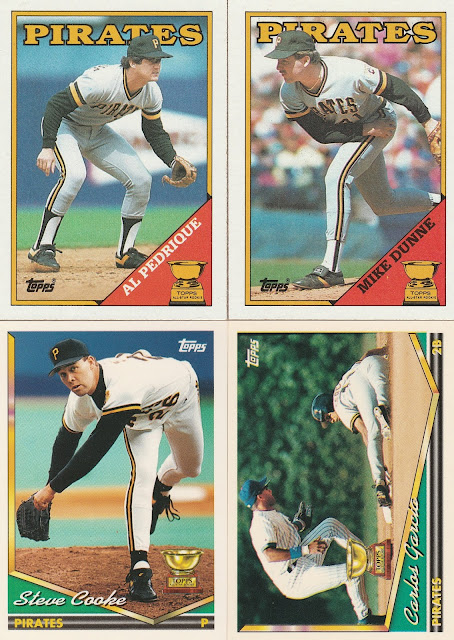 The Pirates did have a pair of catchers named to the Topps All-Star Rookie Team in the dark ages (when Topps failed to put the trophies on the cards) - Steve Nicosia in 1979 and Tony Pena in 1981.

It was feast or famine for a while for the Pirates - they would have no Rookie All-Stars for years at a time, then the 1987 and 1993 seasons had two each!

Al Pedrique had a decent rookie campaign for Pittsburgh, but he would be left in the dust the following season by Jose Lind and Rafael Belliard in the Pirates' middle infield. He signed as a free agent with Detroit, but his MLB career would last just 31 more games.

Mike Dunne was part of the Andy Van Slyke trade, and like Pedrique had his best season as a rookie. He cruised through the National League in 87, posting an ERA+ of 135 and finished 2nd in ROY balloting behind Benito Santiago.

Steve Cooke has a similar story, with a solid rookie campaign followed by diminishing returns. He hung around a bit longer, but was susceptible to the gopher ball, allowing 20+ homers in each of his first two seasons.

Carlos Garcia shares a few things in common with Al Pedrique. Both born in Venezuela, both middle infielders. Garcia, however, showed decent power numbers in his rookie year. He made the 1994 All-Star team, the only one in this group to make the midsummer classic roster. Garcia would also last the longest, playing in 9 seasons at the MLB level. His 12 homers in 1993 were his career high- he would never hit more than 6 in another season. 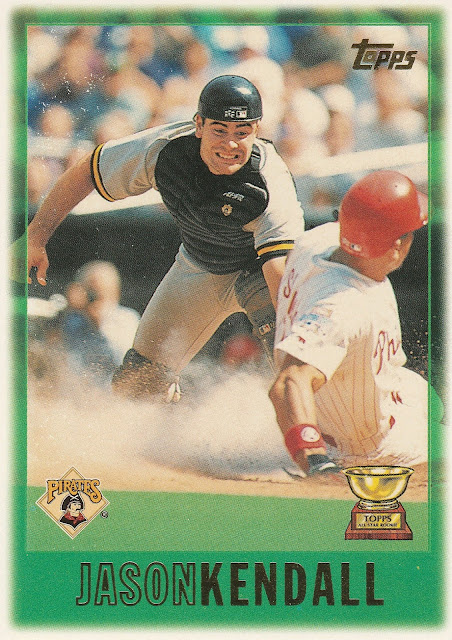 After another mini-drought, the Pirates came back in style with a ballplayer's ballplayer. Jason Kendall was a 3 time All Star for the Pirates, and was the heart and soul of the team for 9 seasons. He bounced around a bit at the end of his career, but he finished with over 2,000 career hits. 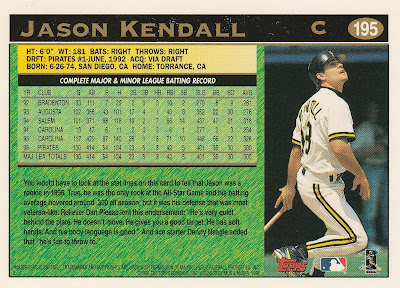 Early in his career, Kendall was known for his ability to steal bases - he swiped 20+ bags in three straight seasons. He finished with 189 steals in his career. With the exception of a 2001 experiment as a part time corner outfielder, Kendall was a steady presence behind the plate, catching in 2,025 career games. 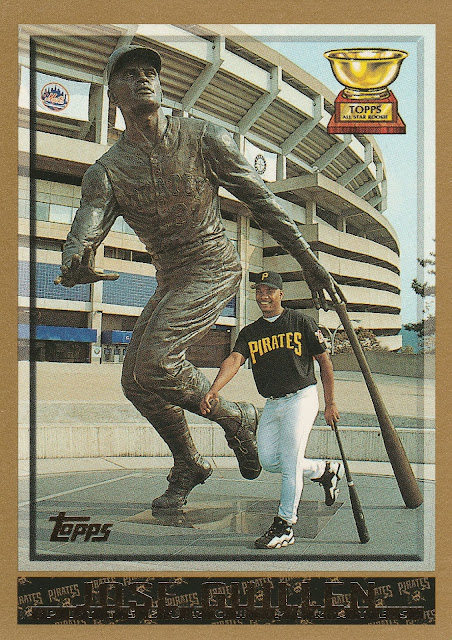 Jose Guillen has one of my favorite Rookie Cup cards, shown with the newly completed statue of Pirates' great Roberto Clemente. Guillen had just jumped from Single-A all the way to the Pirates' Opening Day Roster. 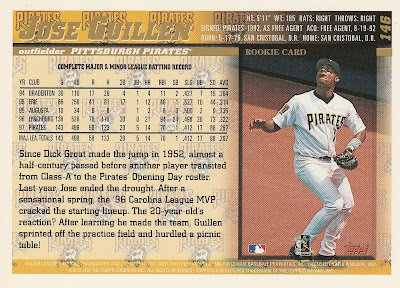 He was known for an incredibly strong arm in Right Field, so the Clemente comparisons were tough to avoid. Guillen would bounce around between 10 different teams over his 14 year career, but made many memorable stops along the way. He reached the post-season just once, in 2003 with the Oakland A's. Oakland would lose the Divisional series against Boston, though Guillen hit .455 in 4 games. He finished up with over 1500 career hits and over 200 home runs. 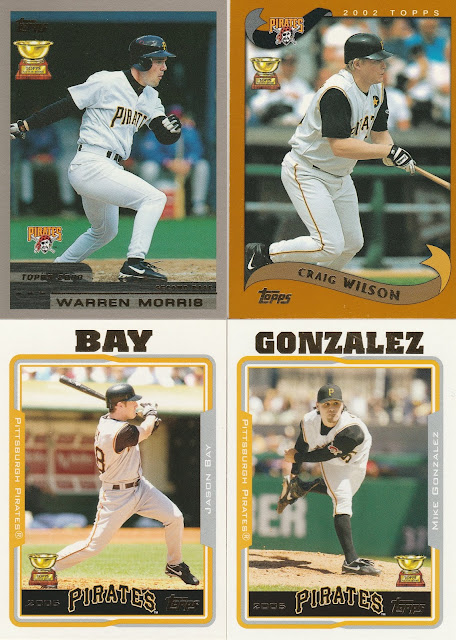 The early 2000s were tough for small market teams (Moneyball was still getting started), but the young prospects offered hope.

Warren Morris had his biggest baseball moment with a 2 out walk off homer in the 1996 College World Series, and was a Bronze Medalist in the 1996 Olympics. With the Pirates he had 2 solid seasons in 1999 and 2000, but had a truncated 2001 season and was released by the Pirates before the 2002 season began. He latched on with the Twins, but was traded in June to Saint Louis. By July he was on waivers and picked up by Boston. He tried to make teams in Detroit, Cleveland, and Milwaukee, and was out of baseball by 2006.

Craig Wilson led the league in being hit by pitch twice in his career. He showed great promise as a rookie, crushing 13 homers in 88 games. Wilson had a great season in 2004, with a career high 29 homers and 147 hits. If not for the injury bug biting hard in 2005, Wilson could have found himself at the heart of the Bucs lineup for years to come.

Mike Gonzalez was also traded to Boston, but he ended up coming right back 10 days later. It's complicated, so I'll just copy/paste from Baseball Reference:

So the Pirates gave up Scott Sauerbeck and Jeff Suppan to get Freddy Sanchez and some $$$. The rest of the pieces were just sent back. Gonzalez settled into an 11 year career as a lefty specialist, appearing in over 500 games, but only 444 and a third innings. 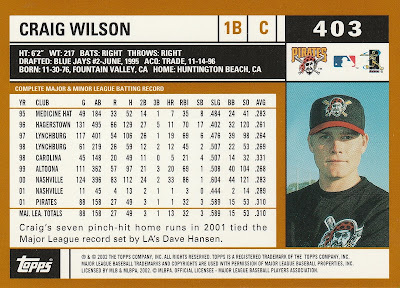 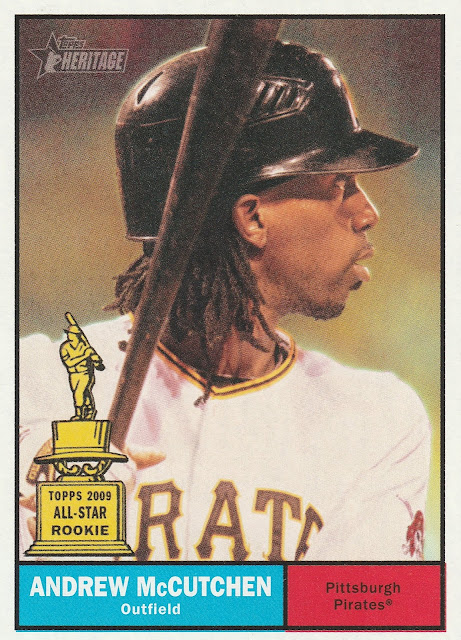 The flagship for these were terrible, so I am just going with Heritage. Can't say much about Andrew McCutchen that you won't already know - League MVP, intense competitor with a mix of power, average, speed - so I'll just say that he was the franchise player for the Pirates for 9 seasons. 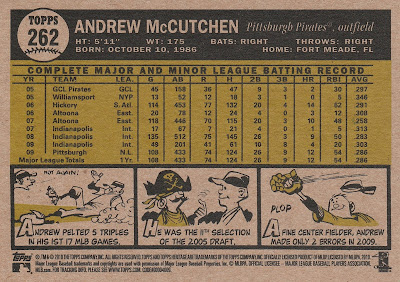 The season after his MVP year, he was even a little better, leading the NL in OBP and OPS. The season before his MVP year he had career highs in hits (A league leading 194), runs scored, homers, and batting average. McCutchen was the key piece of the team that finally ended the Pirates' playoff drought. 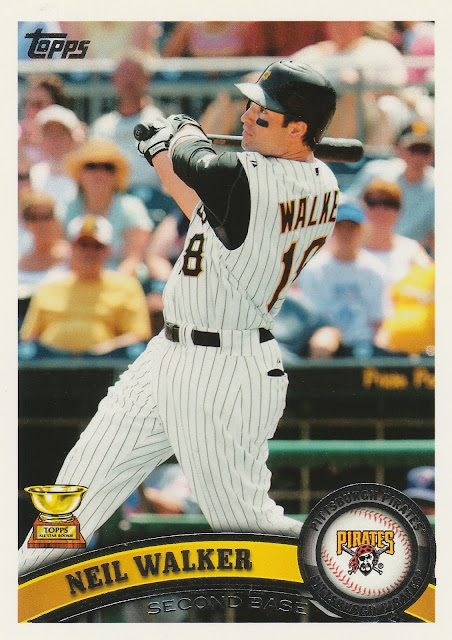 Switch hitting infielder Neil Walker was the last Pirate to make the Rookie All-Star roster, which I find somewhat surprising given the number of talented young players to come through their system in the last 5 years. 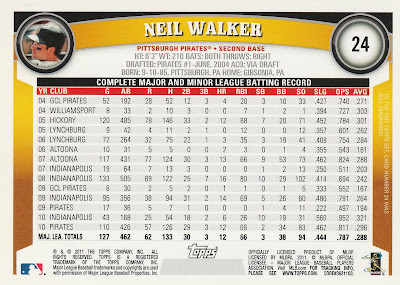 Walker spent 7 seasons in Pittsburgh, and rapped out at least 120 hits in each year. He has been mostly a doubles hitter, with consistent seasons of double digit homers. He's currently in a rough stretch playing for the New York Yankees, hitting below the Mendoza line.


Who will be the next Pirate to be Topps All Star Rookie? 25 year old Colin Moran has played well so far this season, and may join some of the young stars from Atlanta on the 2018 squad.
Posted by Brian at 7:38 PM