Last time in this Series, we looked at the San Francisco Giants, who were turning the page on a rough decade of baseball in the 1970s. In this installment, we switch to one of the dynasties of the 1970s,the Cincinnati Reds. Of course, this is "I Love The 80s" which were a mixed bag for the club. Franchise building blocks Tony Perez, Joe Morgan, and Pete Rose were now gone. They closed out the 1970s with another Division title, but were bounced out of the playoffs by the Pirates. The Reds began to show their age in 1980, finishing 3rd. In 1981, they displayed their wisdom, experience, and pedigree, finishing first in the NL West standings. They missed the playoffs due to the oddness of a strike shortened, split season, however. They were 2nd in the first half to the Dodgers, and 2nd in the second half to the Expos, so despite the best record in the division, they were on the outside looking in. 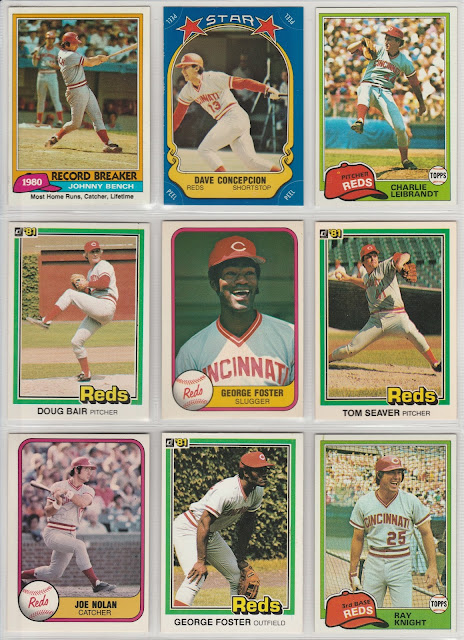 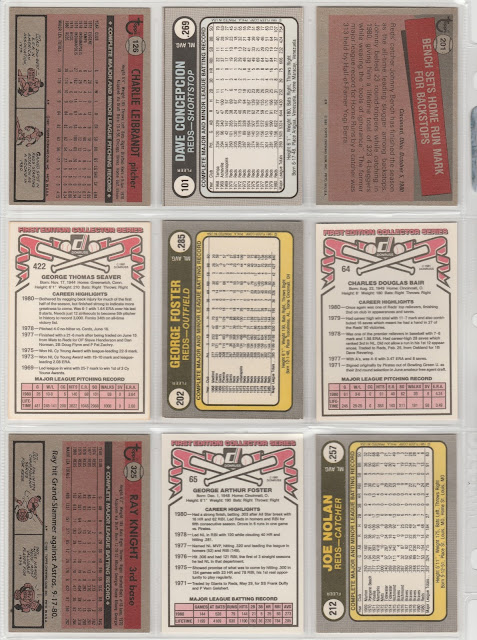 Topps #201 Johnny Bench - 1980 would be the final season for the great Johnny Bench behind the plate, but he made the most of the opportunity, become the All-Time Home Run King at the position. In 1981, Bench played less often, but the rest on his legs resulted in a fine season percentage wise. His batting average leapt up 60 points from the year before, and he saw modest gains in all three triple slash ranks.

Fleer Star Stickers #101 Dave Concepcion - Similar to Bench, Concepcion had a big bump in his rate stats from 1980 to 1981. The difference was that Concepcion was still manning Short, and played healthy all season. He finished 4th in the MVP voting in 81, after a career high in batting average and OPS+. Concepcion also won his first of 2 Silver Slugger awards in 1981, while making the All-Star squad for the 8th straight year. He was player of the Month in April of 81.

Topps #126 Charlie Leibrandt - The 23 year old rookie won 10 games in 1980 for the Reds, then scuffled with injuries and ineffectiveness. He resurfaced a few years later in Kansas City and was one of the anchors of the mid 80s Royals Rotation. As a Twins fan growing up, the sharpest memory I have of Leibrandt is from Game 6 of the 1991 World Series, as he was on the mound when Kirby Puckett hit his game winning home run. For his career, he won 140 games and was a solid mid rotation starter.

Donruss #64 Doug Bair - Bair's first season with the Reds in 1978 was tremendous. He took the role of closer for the team and pitched to a 1.97 ERA and saved 28 games. It would prove to be the best season of his career, though he was good enough to stick with various major league bullpens until 1990. His second best season may well have been his age 39 season, working in the Pirates bullpen in 1989. He appeared in 44 games and had a 2.27 ERA. He was a member of the 1982 Cardinals and 1984 Tigers World Series Champions.

Donruss #422 Tom Seaver - Another Red, more MVP votes! Seaver in 1981 was 10th in the MVP voting, and 2nd in the Cy Young Voting, despite a season that wasn't particularly impressive beyond his W-L record. Seaver did lead the NL in Wins with 14, but his strikeout rate had dropped precipitously since his heyday with the Mets. Seaver had matured greatly from his flamethrowing days, however, and was keeping runners off the bases with improved control and limited damage when they did make contact. After the highs of 1981, Seaver's final year in a Reds uni did not go as well. He would continue to pitch until 1986, winning over 300 games and joining the Hall of Fame in 1992, missing a unanimous election by just 5 ballots.

Fleer #212 Joe Nolan - How'd you like to be the guy that has to replace Johnny Bench? He was a mid season pick up in 1980 after being released by the Braves. Nolan was probably happy to no longer have to chase after Niekro's Knuckleballs (He led the NL in passed balls in 1978).  He responded to his good fortune by hitting .312 for the Reds in 53 games after joining in June, and it was good enough to make him the regular in 1981 for Cincinnati. He had another .300 plus season, but was traded to the Orioles in Spring Training before the 1982 season. The Reds decided to roll with youngster Alex Trevino. It would work out in Nolan's favor as well, as he was Rick Dempsey's back up in Baltimore when the Orioles won the Series in 83.

Donruss #65 George Foster - I had to add another Foster card, I was a big fan of the flip down shades and the Wrigley Field Ivy in the background.