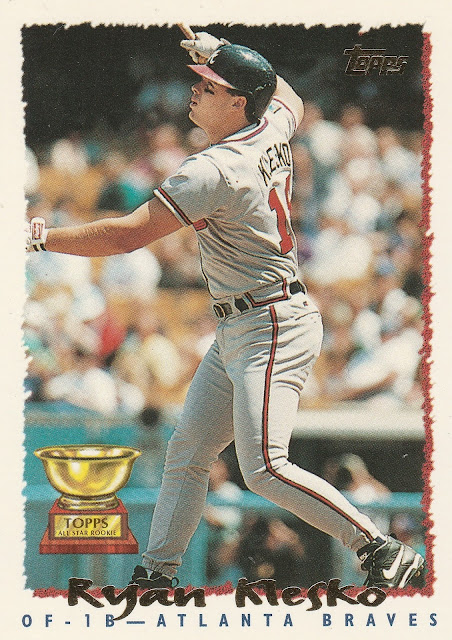 With Bob Hamelin occupying the 1st Base spot already, Topps had to scramble to find a place for the National League's best rookie 1st Baseman, Ryan Klesko. Fortunately for everyone, Klesko was athletic enough to also dabble in the outfield from time to time, and was named to the 1994 Topps All-Star Rookie Team as one of the three outfielders. 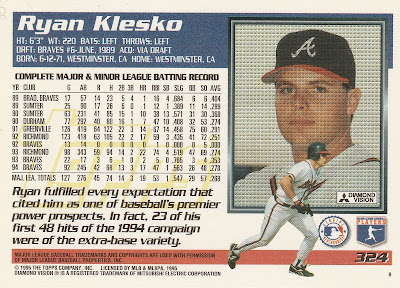 He was a 6th Round selection in 1989, and by the time he reached the majors for good, he had built quite an impressive resume and was riding high on the hype train. His Rookie season included plenty of power (slugging .563) and a decent average (.278) for a rookie. He finished 3rd in the NL in the Rookie of the Year voting. 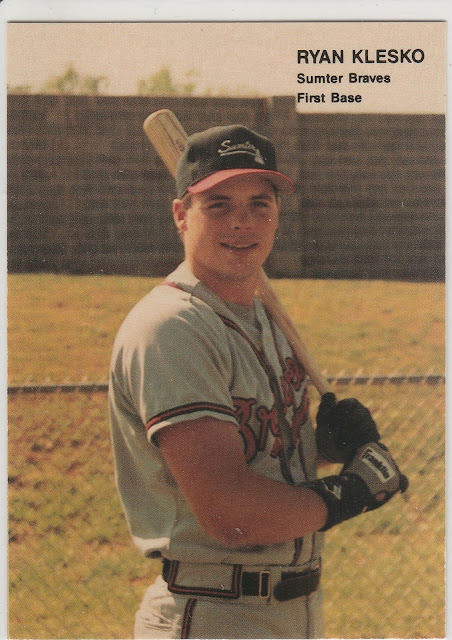 His professional debut came in 1989 with the rookie league Bradenton Braves, playing out the last half of the year after the June draft and even earning a promotion to the Class A Sumter Braves. He'd get a full season in 199, hitting 10 homers in 63 games with Sumter before being called up to High-A Durham and adding 7 more long balls. His power was his big calling card, but he did show flashes of speed and general athleticism, swiping 23 bases across the 2 levels. 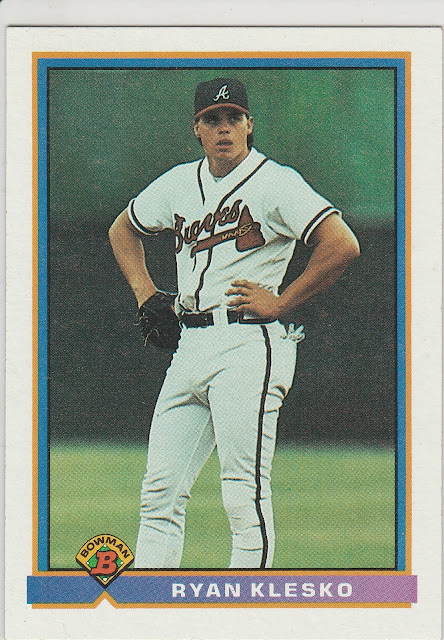 1991 was spent in AA Greenville, where Klesko was not only showing power and speed.  He developed patience at the plate, walking 75 times while striking out only 60. His fine season earned another promotion, and 1992 was spent in AAA Richmond. He'd earn a September call-up in '92 and again in 1993, just as the Braves were kicking their dynasty into high gear. A lesser team might have had a need for Klesko sooner, but it was worth the wait to develop his game. 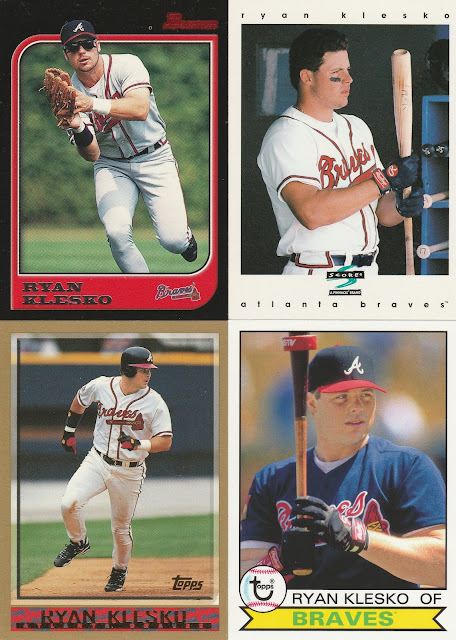 Klesko had a solid Sophomore season in the bigs in 1995, with career highs in Slugging and batting average. 23 homers and 70 RBI were just the appetizer for the post-season. He had a notoriously bad NLCS going 0 for the series, but he hit .467 in the NLDS against Colorado, and in the World Series he hit homers in 3 straight games, all on the road in Cleveland, helping the Braves capture their crown. The feat of 3 straight games with a road homer in the World Series had never been done before, and it would be a lasting legacy for the young slugger. He'd spend the rest of the 90s with Atlanta, and despite not winning another ring, he was a key part of their offense and helped the team reach the post-season every year of his Braves tenure. 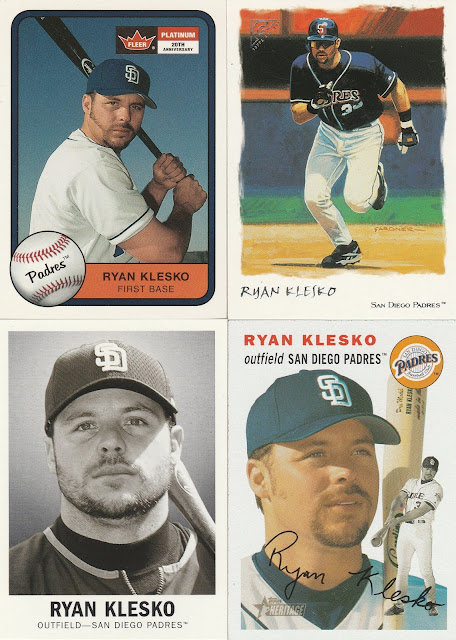 He would return to the West Coast in the 2000s, his college days at Arizona State and his high school in Westminster, CA made San Diego a nice destination when he was traded along with Bret Boone in exchange for Reggie Sanders and Wally Joyner. Klesko would have a successful second half of his career with the Padres, including a return of that early speed (stealing 23 bases each in 2000 and 2001). He would make his first All-Star team in 2001, belting 30 homers to go along with those 23 steals, and slugging .539. 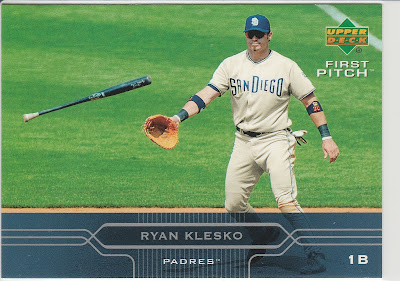 Klesko briefly tried to innovate a new game, Basebat, but it didn't catch on. Just kidding, it was extremely popular. Just kidding, it didn't exist. But what a fun card, yeah? Klesko had a couple more trips to post-season play with the Padres, losing to the Cardinals in the '05 and '06 NLDS. His 7 seasons in San Diego had a nearly identical stat line to his 8 Atlanta campaigns. He had more RBI and stolen bases in SoCal, but more Homers and Triples in Atlanta. Klesko also became very involved in community outreach in San Diego, heading up the team's Make-A-Wish partnership, and being the face behind Klesko's Korner, which provided tickets to families with children battling cancer. 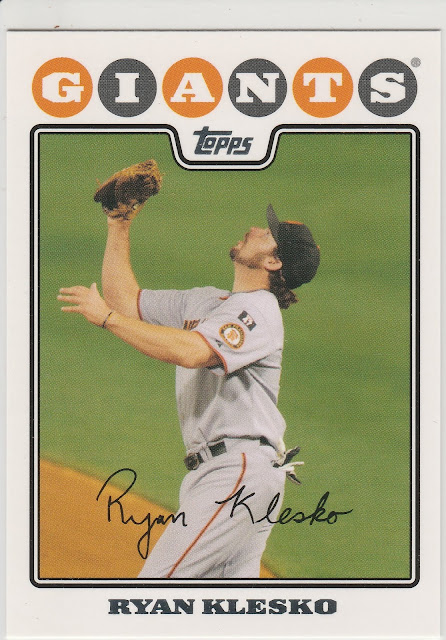 Following a major shoulder injury that cost him much of the 2006 season, Klesko signed as a free agent for 2007 with the Giants. In his final MLB season, he'd get into 116 games as a first baseman, right fielder, and pinch hitter. 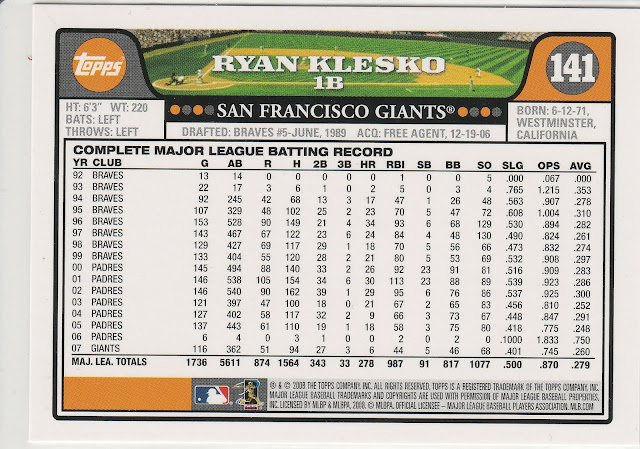 There you have his final career stats - 1564 hits, 343 doubles, 278 homers and a nice even .500 slugging percentage.  Share your favorite Ryan Klesko memories below!
Posted by Brian at 7:40 PM